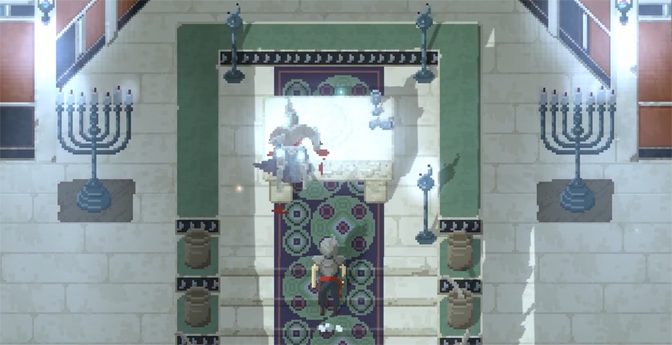 PQube and developer Jinsub Jung are excited to reveal his one-man-project Unsouled today. A deep and melancholic story told in between intense and highly-stylized combat, which is set in an atmospheric, destructible 3D pixel-art world, is coming to PC in Spring 2020.

A man and a woman – both human, both with the monstrous ability to absorb the souls of the dead. Their power gives them choice. Choice to subjugate the weak or to protect them, choice to destroy or to create, choice to rule or serve.

Fighting the creatures that are trying to stop you on your journey is as challenging as it is rewarding. While it only takes a couple of hits to send you back to the last statue you rested at, one well-timed parry can lead into a devastating counter-attack that lets you chain your slashes onto nearby foes in a spectacular flurry.

Ruins, mausoleums, caves. Lifeless places. The world of Unsouled might seem dark and melancholic at first, but all the more overwhelming are the moments of silence and peace when the camera zooms out as you uncover one of the game’s lookout points with a glorious panoramic view over its surprisingly lush environment.