As a Bethesda fan (and yes people, that DOES include Fallout 76, deal with it,) Rage 2 was one of those games that I had a strong interest in. I will admit that the original game to me was just, ok. In the end, I felt that it was designed more to be a tech demo for id’s 4th generation engine, and despite some issues regarding texture pop up, it looked impressive on the Xbox 360.

The only catch to that technology was that id Software and Bethesda both recommended that the game be installed to your hard drive. While the whole game could be installed at 20 GB, there was an option to install from disc to disc (at about 6 GB each.) Still with most 360 drives maxing out at a high of 500 GB and no external drives as an option, very few people were able to take advantage of Rage 1 without deleting other titles.

Eight years have passed since then, and now it’s surprisingly announced sequel, Rage 2 has come out. Courtesy of Bethesda, I have been playing the game since late Saturday night, but I have yet to finish the game, and unlike some other reviewers, want to see everything before I write my final review. But in the meantime, I am just bursting to let you know my first impressions.

Check out this 30 minute slice of amazing gameplay I recorded, culminating with a convoy assault!

For the record, most of my gameplay has been done on the Xbox One X. However, I was also given a PC version to benchmark its performance. For starters, the game is not using id Tech 6, but rather Avalanche Studios own Apex Engine. This surprised me at first but when I think about it, I tested out another Avalanche title developed game a few months ago, the criminally underrated Mad Max. While the game ran at a near constant 30 frames per second on my Xbox One S (I never played it on the X,) it was the PC version that shined more. Running at well over 60 frames per second at 1080p Ultra settings (sometimes going as high as triple digits,) Avalanche Studios had a highly optimized engine for vehicular based combat, and a huge improvement over the engine used in Just Cause 3. (Granted, Just Cause 4 ran better for me, but I only had about an hour of gameplay on that as I’m not the biggest fan of the Just Cause series.)

The Xbox One X version of Rage 2 is running at 1080p which many people will be disappointed about, but to me framerate is key, and for most of the 20+ hours I played, the game was able to maintain a constant 60 frames per second. However, I did notice some significant frame drops, most of them occurring while in vehicle, yet there was one time on foot during a huge firefight that the frame rate dropped (although not as badly.) The PC version I noticed my frame rate dropping down to the mid to high 40s (and this is on a laptop with a GTX 1060 graphics card.) However that run was done before installing the latest Nvidia Game Ready Drivers, so hopefully my performance there will increase, and I will mention that in my final review. 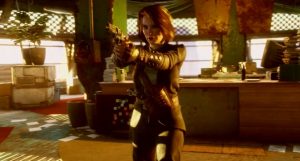 As for the gunplay, well, it’s definitely got that id style to it. The guns feel heavy as they should be and include a secondary mode of fire. One that I became a fan of was the rocket launcher. While the standard mode is the same old point and shoot rockets we are used to, the alternate mode locks on and fires a volley of smaller rockets in the vicinity of your target, similar to the mini-rocket mod the Heavy Machine Gun used in DOOM 2016. And yes, for those who bought the Deluxe Edition, the BFG 9000 DOES make a return. However after firing its initial magazine of three shots, I have not been able to find any more additional ammunition for it.

However, I’ve only played with half the guns in the game. That is because you don’t pick up weapons as you come across them. Weapons are found in Arks, the lifepods left underground in the events leading up to the asteroid impact on Earth. Thus I can’t give my full take on all the weapons I found, but I will also mention that the Firestorm Revolver is an interesting weapon, as it fires rounds like normal, but the Left Trigger causes those bullets to explode and become incendiary at a mere finger snap. I jokingly called it the “Thanos Revolver” as a result.

Arks also unlock your Ranger abilities, special moves that can be unleashed at will. I started off with the Shatter, which I like to call the Fus Ro Dah that can shred armor. I’ve also taken advantage of the Vortex ball and the aerial Slam attack with impressive efficiency. 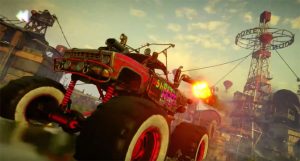 Then there is the vehicular combat, and yes, now I see why Avalanche was selected for Rage 2, because fans of Mad Max will easily feel at home with this level of car carnage. The driving mechanics feel as good as always, and for those who loved taking out Scrotus’ convoys in Mad Max, they are back here. Only this time some of the heavier vehicles are shielded, which means you have to take the shields down before you can do any significant damage. It can be very challenging, but thankfully, also a lot of fun.

And that’s what is most important so far, Rage 2 is just so darn FUN and I am loving every minute of it. I will go more into final detail in the upcoming review, but trust me, Rage 2 is definitely worth it.