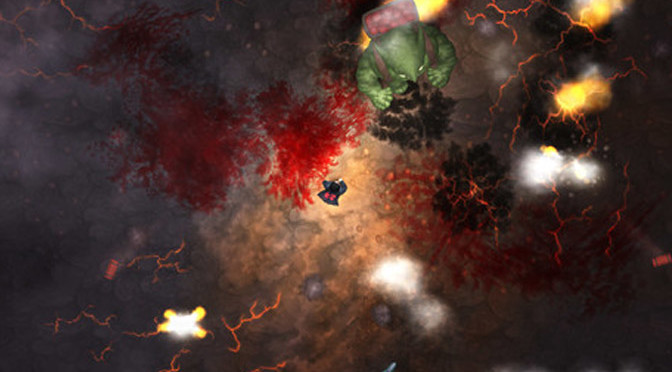 This week I’ve been lucky enough to get my hands on a copy of a neat little game called Razenroth. The game was provided to me by developers for review and can be picked up on Steam for $5.

Players are immediately greeted by a voiced narrative to give them the backstory of Razenroth when they start it up.  The narrative is told from the perspective of Charles Carter, a young journalist that is looking for his missing grandfather.

Razenroth is a top-down shooter that mixes parts from other genres to give it its own personal flair. This includes elements that are commonly found in RPGs, as well as some that rouge-like games use.

Players are tasked with trekking through various levels and fighting off a plethora of creatures as they search for Charles’ missing grandfather. The game uses randomly-generated levels to keep the game interesting beyond the first playthrough.

Fighting off creatures awards the player with experience. Once enough is collected, players can level their character up. Each level awards the player with two points. One of these points can be put into the character’s stats and the other for talents.  Talents require three points a piece to be obtained and there are 20 to choose from. This and the different stats that can have points put into them make it so that players can really choose to customize their characters to play how they want.

When traveling around the world of Razenroth, players will also run into various NPCs that can help them on their quest. This includes merchants, gamblers and some that have side-quests available for the player.

Dark stones play an important role in Razenroth. They are used to upgrade the player’s base. This base is present in every level, even after switching worlds, and keeps its upgrades. It’s kind of like Rouge Legacy in that regard. There are three upgrades that can be bought: one that allows players to buy keys, another that allows players to buy potions and a final one that gives the player one magical item at random per playthrough.

It’s hard to collect dark stones in Razenroth and players won’t be getting their hands on all the upgrades until after a couple of times through the game. Honestly, players will likely die before completing the game and will have to start over. There are also additional character that can be unlocked by completing certain tasks in game. These character have their own spells and abilities and it helps stretch out the amount of time the player can get from the game.

Players will also be able to beef up their character with different items that can be collected throughout Razenroth. This includes equipment and items that increase stats. These can easily be bought from merchants, but are also given out by NPCs for completing side quests. I found it easiest to just used items randomly dropped by enemies rather than spending money on them. This gives the player more dark stones to upgrade their base with quicker.

The art style in Razenroth is solid. The game has a very dark atmosphere going on and many of the creatures look like they came straight from the mind of Lovecraft. All of this darkness really helps magic spells used by the player and enemies pop while on screen. This is a huge blessing to players as it makes it really easy to go into battle against a lot of enemies and not easily lose themselves in all the chaos.

The audio in Razenroth is quite good. I was really impressed with the quality of voice acting that the opening of the game had. It’s more than I’m used to from an indie game. There’s also a good blend of music and sound effects that adds the to game’s already dark atmosphere.

There are a few things about Razenroth that I will have to complain about.  The first is the game’s spelling and grammar. The team of developers behind the game are three brothers from Poland. Cool on them for getting into game design and they’ve got a solid game here, but they really should’ve hired an editor, or a different one, when translating the game into English. It’s all very sloppy and filled with mistakes. Players can still figure out what different talents and such do, but they might have to read the same sentence a couple of times before they figure it out.

My other major complaint with Razenroth is its save system. The game autosaves at the start of each level and that’s it. Players can’t choose to save the game at their own discretion. I can deal with this, even if it’s a bit of an antique system. However, I can’t excuse the limit of one save per playthrough. I sat down to play this and put about an hour into it before I had to leave my computer. I’d just finished a level and shut the game down. After returning and choosing to load my game, I saw a text box warning me that the save function is shut off after the first use. This had me leaving the game running while I wasn’t at my computer for fear of losing my save. Sure enough I had to leave at one point and didn’t want to leave the game running. I shut it down and returned to find that my save had been deleted.

This is such a stupid choice! It’s not about making the game more rouge-like and harder. It’s about limiting the player to completing the game in two sittings. It’s not that this isn’t doable or anything, but it’s very annoying. I’d be willing to say that the average playthrough of the game is about three hours. That’s a little too much to expect players to do in two sittings. It’s also just plain frustrating and bad design. I shouldn’t have to schedule time to play a game during the day. I should just be able to pick it up and play it, and put it down when I choose.

Sure, delete my save when my character dies. Razenroth is a rouge-like game. I understand doing that, but don’t limit the number of times I can save. We live in an age when patches are released to fix and tweak games. I really hope the developers take advantage of this to change this about the game.

Overall, Razenroth is a very solid game. It’s gameplay is good, it’s story is interesting enough and it has a cool dark atmosphere going for it. However, it’s not without its flaws and some of them are major.

Razenroth earns 3 GiN Gems out of 5!