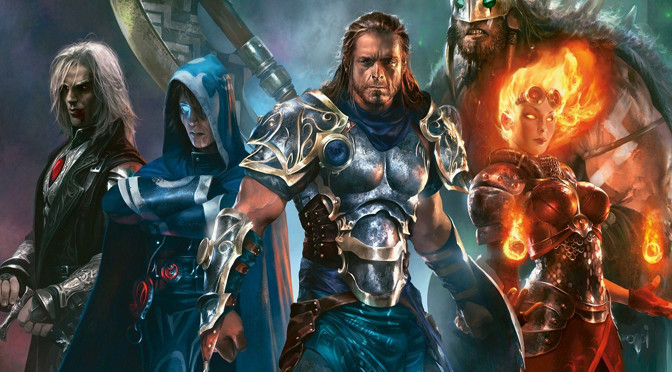 I hope everyone had a great New Year’s Eve and Day. I’ve been busy these last couple of weeks (like I’m sure most of you have been) and I decided to take this time to take a break from video games. However, I’m a gamer at heart and that means I needed to get my fix somehow and Magic: The Gathering was my go-to choice.

I’ve been playing Magic: The Gathering for several years now (I played casually in Kamigawa and got serious about it in Zendikar) and it’s become one of my favorite past times. For those who don’t know, Magic is a collectible card game that has players assembling decks made up of at least 60 cards. Players use land in their decks to produce Mana for summoning creatures and casting spells and there can’t be more than four of a named card in a deck. The goal is to defeat other players by reducing their life to zero or making them run out of cards to draw.This is actually a very basic explanation of the game as it’s much deeper than this.

One of my favorite things about Magic: The Gathering is building decks. There are five basic colors to choose from and players can mix and match them to create complex decks that suit their own play styles. There are thousands of Magic cards out there and searching through them all to create a deck can be a real time sink, but it’s worth it. I usually spend three to four hours creating a single deck and then more after that testing it and making adjustments.

Playing against other players is where the heart of Magic: The Gathering is. It’s great to see what other players come up with and learning the ins and outs of the more complex elements of the game make for some really unique strategies. I personally love multiman matches, which brings me to what i did over the Christmas and New Year’s break.

This year everyone was interested in playing Commander. Commander is a different format of Magic: The Gathering that has been picking up steam lately. If differs from normal Magic in that decks must have at least 100 cards in them and there can only be one of each named card in the deck. Players also must choose a commander from their Legendary Creatures to make a Commander. Whatever colors of Mana are used in summoning that Commander are the only colors that the deck can be made out of.

Commander specifically focuses on having multiple people together to play with. The average match is between four people, but there can be more or less than this. I love the format because only being able to use a single copy of a card instead of four forces players to use other cards that typically wouldn’t be good in normal Magic: The Gathering games. The uniqueness of having a Commander in the game also completely changes how people build decks and brings out new concepts and strategies.

When collected together at Alia’s side of the family’s Christmas and New Year’s events, Magic: The Gathering is almost always played. This year I got to sit down and enjoy playing with my three brothers-in law and my cousin-in law. After those events were done, Alia (as in mostly me, Alia has been sick the last couple of weeks) and I invited them back to our place to continue playing Magic. We were also able to get some of my friends to join in for a few days of Magic that involved anywhere from four to nine people.

It’s great to sit around with friends and family to enjoy a common interest like this. New rivalries were born and underdog victories were achieved all on a tabletop. I’ve enjoyed my couple of weeks away from video games and I’m ready to sink my teeth into all the great titles coming out. When we ultimately hit the dry season for video games, I always have Magic: The Gathering as my backup.

For those who are interested in getting into Magic: The Gathering, Wizards of the Coast sells Deckbuilder’s Toolkits for $20 a piece. They come with the basics that players will need to get into the game and are a great entry point into it. My only warning is that it’s an addicting game that can be rough on the wallet at times.

This isn’t so much a review as it is a talk about Magic: The Gathering. So I’ll be filling the score in with a 2.5 out of 5 as a placeholder.