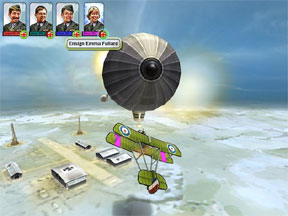 Greetings, Time Wasters! Your regularly scheduled reviewer has been captured behind enemy lines this week, so it’s up to your friendly neighborhood editor to temporarily take over. Actually, poor Billy is feeling under the weather. It seems that Santa brought him kidney stones for under his tree this year. So let’s all wish him a happy holiday and a speedy recovery!

Taking over the Time Waster column is no easy thing for me. Normally I play pretty in-depth RPGs, or strategy games that require lots of reading just to deploy your first units. The whole point of a good Time Waster game is to get players up to speed quickly, and to be setup so that they can play for a few minutes, perhaps sneaking away on their lunch break, or for a few hours to unwind at the end of the day.

Thankfully, I’ve actually found a game that does almost all of those things. I had been fooling around with Sid Meier’s Ace Patrol for sometime, and Billy’s temporary hiatus gives me the excuse I need to write it up for you. That’s great, because this is one little title that I think most people will really enjoy. Originally launched for the iOS platform, it’s recently branched out and landed on the Steam online service for PC players, which is where I picked up the war.

So we all know that Sid Meier is the genius behind turn based strategy games like Civilization and also some pretty neat real-time games like Pirates. All of Meier’s games are known for quality, and Ace Patrol is no exception. This time out, gamers will find themselves fighting the air war over the skies of Europe during World War I.

Unlike aircraft today that are jam packed with long-range missiles, targeting computers and little niceties like eject seats, the planes flown during World War one were pretty primitive. Made of canvass and wood and powered by something akin to a lawnmower engine, they were mostly armed with simple machineguns. Attacking other planes required that the two pilots close in on one another, engage in a war of maneuver, and blast away at close range. As such, it was all about the skill of the pilot.

In Ace Patrol, players take the role of commander of a squadron of pilots from one of four nations with France, England and the United States on one side and Germany on the other. Your choice of nation will give you access to different aircraft as the war progresses, but everything else is identical among all combatants.

Missions consist of a mix of offensive objectives, like strafing a convoy of trucks moving behind enemy lines, to defensive like stopping a bomber before it can drop its payload on your aerodrome, to simple fights where you have to eliminate all enemy aircraft. There are technically 120 different missions, but in truth, there are about 20 types all together with slight variations on each theme.

Combat in the game is a lot like a board game. If you’ve played any number of Avalon Hill type board games, you’ll understand it right away. To maneuver, pilots play cards. Every pilot has access to basic cards like changing altitude or turning. As you play and complete objectives and shoot down opponents, your team will earn new maneuvers from fancy defensive loops to spinning changes of direction that can put your guns on an opponent from an unexpected angle. Cards go with the individual pilot, so you will have to think about which of your four pilots to take into combat. Do you want one ace to level up quickly and act as guardian for your greener troops, or do you want everyone to level up at the same time? Pilots can be injured, captured or killed, so be careful how you play.

When two planes get together, they will automatically shoot each other. Players can see a readout of the expected damage a certain maneuver will inflict. In general, you want to have the front of your plane point at an enemy aircraft without placing your own fighter in the crosshairs. Battles are played out on a large hex map, and each airplane can move between one and three hexes on average and also change to one of five possible altitudes per turn. There are special ways to get more movement, like having a high-flying plane give up height for distance, a great way to speed past a picket of enemy fighters or make a dash for home. In general, it will take more than one pass to down an enemy airplane or to knock you out of the sky, though critical hits are possible once health (of your airplane or opponents) drops below 50 percent, giving one more thing to have to consider in a protracted engagement.

The war has four stages of several linked battles each, which represents about one year of combat. Each stage ends in some type of major conflict, be it a free-for-all with every plane participating or a boss type battle where you have to shoot down a well-protected blimp. The trick is to have your pilots leveled up and equipped with enough gear from the normal battles to be able to survive the year-end melee where their skills will really be tested.

Graphically, the game looks great. Even though it was originally created for the screen of a handheld, it still looks nice on large PC monitors. They use the traditional Sid Meier cartoon-like template found in most of his other games, so size really doesn’t matter too much. The sound is a little repetitive, with each pilot only having one or two sound bites to say, (and each one being exactly the same) so expect to hear "Yes, Sir!" and "He’s going down!" quite a lot.

Missions are fun and tactical, but can get to be a little repetitive over time. When I first started playing, I sat there for hours and hours, going through several years of the war, then switching nationalities and trying again with different airplanes. But after that, I only popped in for ten or twenty minutes at a time. However, when you consider that this is a $5 game (or app if you are playing on a mobile device) then that’s a pretty amazing deal. I’ve even seen it on sale at Steam for $2. You really don’t expect to get this high level of quality at that price, unless the game carries the Sid Meier name I guess.

In the end, Sid Meier’s Ace Patrol is a game that you should scramble to acquire. It would be a great game at $20. At $5 or less, it’s a pretty ridiculous steal and especially attractive if you love turn-based, thoughtful combat.