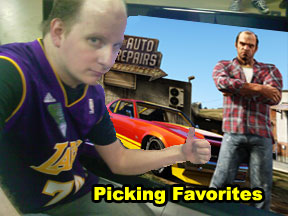 This year, 2013, has been a very interesting one for gamers, that’s for sure. Here we are in a transition from one console generation to another. Yes the transition started last year with both the PS Vita and the Wii U, but with the Xbox One and the PlayStation 4 the transition is now complete.

Still, even with this transition taking place there is still a lot to discuss with the previous generation as well as the mobile platforms, and once again it is time for me to unveil my personal awards for the best and worst that this year had to offer. And yes the usual rules apply. These awards are given to the games that I played over the current year, and I stand by all my choices. So, without further ado, here we go…

What started out as a suspected April Fool’s joke turned out to not just be a reality but also one of the most fun romps in 80s action cheese. Yes I’m speaking about Far Cry 3: Blood Dragon. You all know how much I loved Far Cry 3, namely the character Vaas and that awesome weed burning mission, but now feature Michael Biehn of Aliens fame as Sgt. Rex Power Colt and put him in a neon colored post apocalyptic “future” of 2007, facing off against robot soldiers who talk like Cylons, huge radioactive dragons, and one kick ass soundtrack and you have yourselves a winner. And that ending part? Well, we’ll get to that later.

I have received a lot of flak over the past year for my comments about this game, and I know I’m going to get a ton more with its induction, but I’m sorry, I did not like Bioshock Infinite at all! Before you all start claiming that I hated the series, I don’t. In fact, the first Bioshock, despite the horrid ending, is one of my favorite games on the 360, and I also enjoyed the second one, though not as much. But when Infinite came out, there was something that turned me away from it, and it was the fact the game pulled away from the RPG roots and puzzle solving hacks that the Shock series were both known for, especially System Shock 2. Now if I want to hack something? I just use a plasmid on it. Whoopie. Yes the whole bending reality concept was nice, but it just felt tacked on. I’m sorry, Infinite supporters. This game is grossly overrated!

Give it to Microsoft, they had a hell of a turnaround this year with the Xbox One. Up to E3, we heard all the comments about the system being “always on,” how you would not be able to trade in or sell your games, nor purchase used games, meaning the end of smaller game stores and Gamefly. Then E3 came along and it just got worse. It even got to the point where I was dead set on getting a PlayStation 4 as a result. But in a matter of two weeks, Microsoft pulled a complete 180. Mandatory daily online check in: gone, Blocking used game sales: gone, purchased games stuck to one console: gone, and much to my surprise, region lock, gone! Yes now I can go back to trading in games once I get my Xbox One and even rent them through Gamefly. And it looks like the 180 is working well, as the Xbox One has already sold at least 2 million units since its launch.

DUMBASS OF THE YEAR

But I’m not done with Microsoft. I’m not letting one (now ex) employee off the hook with this dishonor. Yes, Don Mattick, I’m looking at you. You almost killed a franchise for Xbox fans with your flippant attitude of those who might not have internet connectivity. As if your “no internet, get a 360” comment wasn’t bad enough, what about insulting the military with your “I’ve never been on a nuclear submarine” remark? I too have never been on a nuclear submarine, but I know better than to insult those who have like you did.

No wonder why you left Microsoft the way you did, but where did you decide to go? ZYNGA?!? A dying ship like Zynga and you are taking it over? I know they are still up and running, but will that still be the case in 2014? Time will tell.

I also want to give a Dishonorable Mention to those who actually wrote a petition wanting to bring back all the DRM that was originally planned for the Xbox One. You really don’t want to be able to trade in your games or rent them to save money, do you? I weep for humanity sometimes.

Remember how I said I was going to come back to Far Cry 3: Blood Dragon? See for yourself, but as Spoony would give as a disclaimer: WARNING: What follows is the manliest moment in game history. You will hang your head in shame at the mere fact that you will never in your entire life do something half this manly!

BADASS OF THE YEAR

No contest this year. I didn’t think I would really get into Grand Theft Auto V as much as I could until I met Trevor Phillips. I can’t let words describe how awesome this character is, but I found a compilation of some of his best work. Be warned, much to no one’s surprise, this is definitely not NSFW:

And with that, my annual awards come to a close, but I’m not done yet. Next up I will provide my choices for the five best, and of course, the five worst, games of 2013. Stay tuned to see what they are!

Waiting For: Xbox One