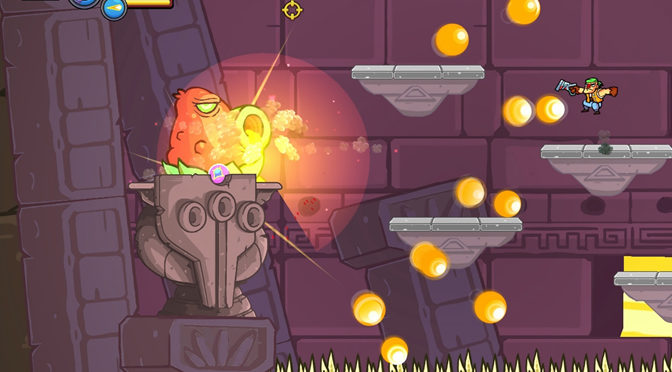 This week I’m here to tell you about a game called Greedy Guns. This is a new 2D indie game on Steam that takes the Metroidvania genre and mixes it up in its own way. Full disclosure: I was given a review code for this game by the developers.

The story of Greedy Guns has players taking on the role of a mercenary adventuring on an alien planet. As the name of the game implies, he isn’t there for to reach of to the natives. Rather, he’s taking down special targets and harvesting their DNA for an evil corporation. The plot thickens as the game progresses and there are a few plot twists here and there, but none of it is really shocking, if I’m to be honest.

While we’re being honest, the story of the game isn’t really what anyone is picking this up for anyway. It’s the gameplay that is the real draw here.

As I’ve already said, Greedy Guns is a Metroidvania-type of game. This means that players will explore the planet and battles bosses along the way. Defeating these bosses earns them DNA, which unlocks new abilities. These abilities can help in combat and also unlock new paths that were previously inaccessible. The game also has a heavy focus on shooting, which puts it closer to Metroid than Castlevania.

Shooting in Greedy Guns is setup so that the player can fire in every direction around them. This is possible by using the right analog stick to aim and the right trigger to shoot. Jumping (and double jumping) is on the A button and switching weapons is on the right trigger. These are the basic controls of the game, but additional skills go on different buttons. While the layout isn’t bad, it can make it a little difficult to jump and aim at the same time. Luckily, the game supports changing the controls around, and I’d highly advise moving jump to one of the shoulder buttons. Those that prefer the mouse and keyboard also have that option available to them.

The combat is Greedy Guns is fast-paced and fun. Enemies and bullets will come from everywhere, which will require players to dodge and roll to the best of their abilities to avoid getting taking damage. If they do take damage, then it isn’t the end of the world. The game starts players off with enough health to take a few hits before death. Players can also find additional health, guns and other upgrades by exploring the world.

Finding extra weapons in Greedy Guns is both good and bad. There’s the excitement of getting a new gun to play with, but the game quickly takes that away. See, even after players collect the weapon, they won’t be able to use it until they purchase it. Doesn’t make much sense, I know, but that’s how the game works. Players buy new guns with gold, which creatures will generously drop after death.

Players can’t just load up on every weapon in Greedy Guns. Instead, they can only carry two at a time. Some weapons are better for certain boss battles, but you can’t know that in advance. The developers know this two. The game is forgiving and spawns players right outside of boss rooms after death. Each of these rooms also have a kiosk to change weapons at right outside them.

Greedy Guns also has a local two-player mode for those that are interested. The game only just came out yesterday, so I haven’t gotten a chance to really try this out yet.

The visuals in Greedy Guns are nice. It’s great 2D art, but not pixel art. I’m a true fan of pixel art, but its nice to see a different style every once in a while. My one complaint with the game is the hit-boxes. I had one boss fight in particular where I knew I was hitting the boss, but wasn’t doing any damage. This isn’t a widespread issue, but it was annoying.

The audio in Greedy Guns is easily the weakest part of the game. Most of the sound effects are solid, but there are a few that just stick out as obnoxious. The game also goes through these shifts between it being completely quiet, and then blaring  music when an enemy shows up. It just isn’t a natural progression of the audio and can be a bit jarring.

Overall, Greedy Guns is a good Metroidvania game. It brings its own unique style of gameplay with it that is hard and fun, but still forgiving. I do recommend this game to Metroidvania fans, but only if they’ve beaten some of the better games in the genre first.