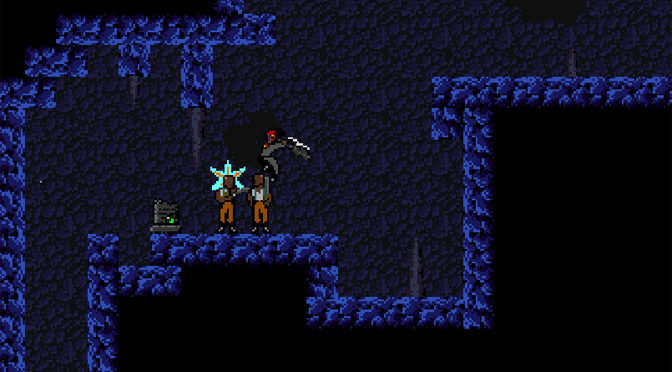 This week I have an interesting game that’s actually a sequel to a previous time waster. That game is Sanguine 2. I first reviewed the original Sanguine back in 2013 (feels like it’s been longer than that) and I loved it.

Sanguine 2 continues the story of the first game with Elly the vampire traveling the world to exterminate the monsters that want to take it over. She’ll run into many enemies along the way, and not all of them will be otherworldly.

Sanguine 2 will have Elly facing off against both man and monster on her adventures. She’s being tracked by the authorities for her recent killings. This includes many poor townsfolk that have tried to get in her way.

The townsfolk in Sanguine 2 are an important source of energy for Elly. She needs blood to live and draining it out of humans is the best way to stay alive. Elly can store three containers of blood at a time and each feeding fills a container. The more blood Elly has, the better she can run, jump and perform other tasks.

Absorbing blood also allows Elly to take additional hits. Having no blood at all means she will die with just a single blow. However, each storage of blood is good for one hit. It’s necessary to keep a good stock of blood if players want to make it through some of the more challenging part of the games.

Collecting blood is one of the more entertaining aspects of the game. Sanguine 2 allows the player to stalk townsfolk with their acrobatic abilities. This includes climbing across ceilings, hiding in trees and more to get the jump on the unsuspecting humans. The player only needs to touch a human to grab hold of them. At this point, they can choose to immediately feed, or drag the person off to a more secluded area. They can also use the chain grapple found early in game to drag humans to them.

If a player is already full on blood, they can choose to simply kill the townsfolk or sneak past them. One thing I noticed is that Elly can use a human she is holding captive for an extra jump. It’s not really needed at any point during the game, but it left me with a Kloana feel and it was a nice option. Also, be careful not to let the humans see you coming if you don’t want your diet to include lead.

Elly’s main form of combat in Sanguine 2 is her axe. She’ll need this to defeat the various monsters in the game. This includes bosses, mud men, flying imps and more. These enemies can’t have their blood drained, so combat is the only way to deal with them. She can also find other items to aid her in her journey. One that I discovered was a scythe hidden behind a wall. It gave her better range and let her take an extra hit before dying.

The combat in Sanguine 2 is never really too challenging. Enemies all have fairly simple patterns that make them easy to defeat if the player is paying enough attention. The only thing that may be a problem are the controls.

Moving Elly around in Sanguine 2 is quite odd. See, Elly is very lightweight and thus has a more floaty feel to her. She also doesn’t like to stop moving forward as soon as the player lets off of the arrow keys. This makes getting used to the game a bit difficult and can really be annoying during some of the more difficult platforming sections. It’s not a game killer, but I definitely could have done with some more precise controls.

Players that are planning to sit down and beat Sanguine 2 in one sitting may want to make sure they have plenty of time. There are three different overworlds in the game and each one has four levels in it, as well as a boss area. Players will spend a good bit of time with the game and may not be able to do it in one go. Fortunately, the game does have save files, which means it is easy to pickup where you left off.

The graphics in Sanguine 2 are great. They have a retro feel to them that looks like it was pulled straight from the 8-bit era of gaming, but with a few modern additions. There have also been some design improvements for Elly from the first game that help her stick out a bit more.

The audio in Sanguine 2 is wonderful. A lot of care was taken to make sure that the music in the game matched up with the visuals on screen. There’s the perfect amount of creepy, unsettling music in the game to give players that Gothic feel that comes with the vampire trope. Sounds effects are also great with humans’ screams while being drained of blood sitting as a high point.

Overall, Sanguine 2 is a great game. It’s a good adventure that is sure to be enjoyed by fans of retro-styled games. It specifically gives off a Castlevania type of feel and it looks and sounds great while doing it. Now if only the controls weren’t so loose.