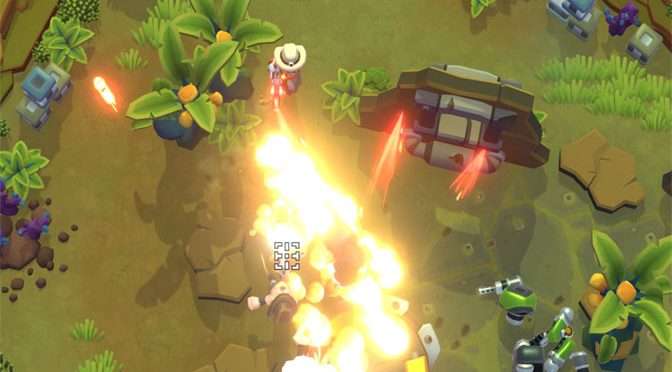 TombStar is a roguelike, top-down shooter, and even I have to admit, that description sounds a bit reductive. Do not judge this game based on that description because TombStar is a shocking amount of fun. Some days, you really just want to log into a game and kill all the things, and TombStar lets you do just that.

TombStar is based in a sci-fi world, so you play a group of characters that are trying to stop the evil GrimStar from doing…something. Realistically, though, the plot isn’t terribly important to the game. Rather, the game focuses on how the setting influences gameplay. 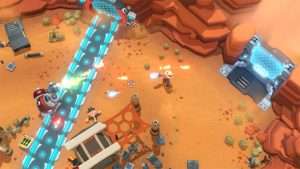 Each member of your stable of playable characters plays on a different, automatically generated biome, and these biomes range from grey-ish, barren-looking biomes to your standard “Wild West” desert. Each character then comes equipped with a standard weapon with infinite ammunition, and then, the game turns you out into the biome to do battle with the evil GrimHeart, featuring the usual motley assortment of mobs. 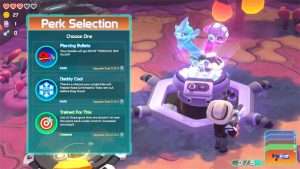 Each of these biomes follows a standard room-hallway-room design, and you do need to completely clear a location before moving to the next because the reward for doing so can then be used later to purchase upgrades of various descriptions. The upgraded guns that you can purchase do come with much more limited ammunition. You’ll have to replenish that ammunition either from drops or by purchasing units from stores. 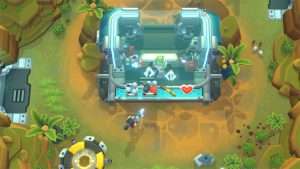 You’ll find a store on each level, though you may have to do something to unlock it, such as, again, clearing out the mobs in the area. You’ll spend the gold you’ve acquired along the way here on items ranging from the aforementioned ammunition packs to health packs to upgrade chips, which is a particularly fun concept.

You’ll also have access to keys, which can be expended to open new weapons chests and perk rooms. The perk room is particularly cool. You go in and choose a “perk,” which serves as a static boost to your abilities. You use the chips to upgrade these perks, and you’ll want to upgrade because the GrimHeart gang hits hard and frequently. You’ll be dodging lasers, bouncing explosives, deadly bowler hats because why not, and a wide range of other projectiles. Fortunately, you can rather easily tell which enemies you’ll be facing as they tend to be distinct, organized into robots, humans, and aliens. 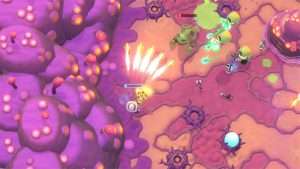 TombStar’s overall gameplay requires you to be conversant with the weapons and special ability possessed by your character as well as being able to identify potentially helpful aspects of the terrain. The key to the game is avoiding being shot, obviously, and one of the better ways to do that is to use cover to block the projectiles. Thus, being aware of how to use the map to your advantage is a key skill to develop while playing TombStar. The game doesn’t inundate you in mobs, which makes reading the terrain a little bit easier, but the mobs will back each other up where possible. By that I mean, you can be dealing with one class of mob only for their friends with a much more powerful weapon set to turn up to rain on your parade. 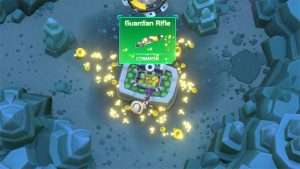 Now, for the game’s issues. Resources like ammo and gold are very, very dear in TombStar, which means that you’re going to be scrounging, constantly. I found myself spending more gold on health than I did on fun new weapons, and that purchase frequently exhausted my supply of currency. I suspect that were I better at dodging bullets, I might find otherwise, but I do think the game needs to increase the drop rate, if for no other reason than to safeguard player sanity. 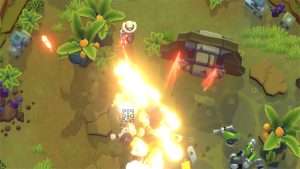 The perk mechanic, while fun, can also take a great deal of time to develop. As I mentioned, I usually expended my currency on health, and as a result, I did not often get the chance to purchase keys. You can earn perks by finishing the level and by beating a boss, but you’re by no means guaranteed to get a boss on each level. If you’re the kind of player that likes to create detailed character builds, you’ll be frustrated by TombStar as it does take so long to explore the perk system. For me, however, I enjoyed the opportunity to rely on dodging and shooting. I didn’t even particularly mind relying on my initial gun even though it took far, far longer to kill enemies with that than it would with some of the more entertaining weapons.

TombStar’s gameplay design is twin-stick, and while I used a keyboard, the game does support controller use. I kind of wish I’d had the opportunity to explore using a controller because though a keyboard grants me better control, I think the controller would have been more fun. 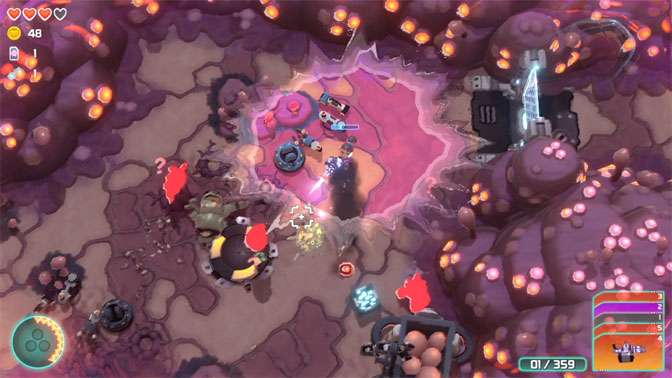 TombStar offers fantastically fun combat, so if you go into the game with the understanding that you’re going to be spending all of your time dodging or shooting without being overly fussed about weapon upgrades, you’ll love the game. The combat flows nicely, and you’re never so overwhelmed with mobs that the play difficulty outweighs the fun. However, players interested in progression—experience, new weapons and character builds—should probably look elsewhere. Those are the aspects of the game that are least well developed. While playing, I found myself nostalgic for the exaggerated loot scheme from Diablo. That said, TombStar is a solidly entertaining game that lends itself well to playing a level here or there when I had time.