Curious Expedition 2 is one of those interesting little gems that, again, I probably wouldn’t have thought to play had I not been writing this column. While I do like a good dungeon crawler as much as the next person, I tend to favor other games when I’m making my own choices. Curious Expedition 2 reminded me of why I should remember to give these roguelike games a try. 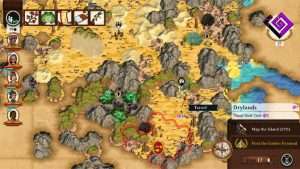 Curious Expedition 2 begins with a storm while you and your party are at sea. Buffeted by winds that could fatally damage your sailing vessel, you come through the storm only to discover that a mysterious island has appeared on a route where no island has ever been found. You and your intrepid crew opt to make landfall on this mysterious island and explore, and thus begins the tutorial.

While I was thrilled to explore the island itself, I quickly realized that this game tries to strike a balance between resource management and dungeon crawl. I’m never, ever going to be a fan of resource management games. I don’t like Settlers of Catan–yes, I’m aware that’s blasphemy—and I am grateful to never play something like Patron ever again. That’s no slight to either game, of course, I just don’t care for that particular kind of gameplay. 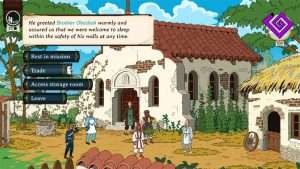 The resource management piece is pretty key to success in Curious Expedition 2, but the exploration component is equally important. That’s where things become engaging. The basic idea is that you and your motley crew are based out of Paris, and you have the option to trade with three Explorer Clubs that will fund your expedition in exchange for the rights to everything—and I mean nearly everything—you bring back with you. However, you do acquire both Fame points, which satisfy win conditions, and “Expo tickets.” You do not necessarily have to marry yourself to any one of the three clubs which are basically automatons/tech, British, and East-Asian inspired.

However, you may decide that you want some of the Club-specific items to take along with you on your adventures. Your missions range from retrieving a rare orchid, which was certainly relevant to my own interests, to capturing legendary critters. Successful mission completion is obviously the goal, but do remember that you have to make it back home alive in order to cash in on said success. Ultimately, however, your missions will lead you to retrieve an artifact that will, you guessed it, save the world. 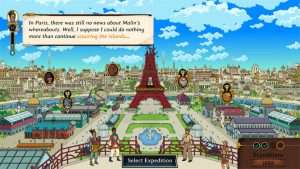 Theoretically, CE2 is set around the 1889 Paris Expo, which, among other things, gave us the Eiffel Tower, but the Expo itself factors minimally in CE2. Thus, there is a fairly thin gloss of colonialism that overlays the game. Generally, interactions with local tribes are fairly pleasant, but please note, you do have a “plunder” option in your action menu. The game does seem to expect and reward choosing the plunder option. Bringing home trophies does result in Fame point acquisition, after all. The ultimate win condition for CE2 is survival, which is nice as you don’t have to worry about beating any other game character. However, even if you don’t survive, the game doesn’t automatically force you to restart. It grants you options, and you can decide how you want to play. You can choose to restart the game to be sure, but you can also restart the year or even just the current mission. That’s really, really nice, especially if you’re a casual player. You can change your difficulty settings in the middle of the game. I have to admit I chose the “fun over frustration” option. Life’s already difficult enough; I don’t need an AI to complicate matters all the more. 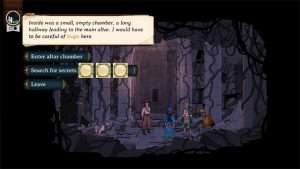 CE2 offers a wide range of options as far as party members go, up to and including animals. Therefore, the game affords a huge amount of variation in terms of how you navigate the usual obstacles: dangerous animals, lethal plants, and risky diplomatic encounters with the indigenous peoples you encounter. You hire your crew mostly from the clubs, at least in my case, and that’s the first place where the resource management element comes into play. Once you hire your crew, you’ll need to keep them relatively happy if you don’t want them to ditch you entirely. 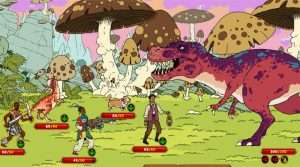 One of the most important resources in the game is “sanity,” which feels very Call of Cthulhu to me. All movement costs sanity, and once your party’s collective sanity meter becomes depleted, disasters become more common. This isn’t quite at the level of Eternal Darkness, mind you, but you’ll need to keep abreast of how your crew is handling the stress of exploring the unknown. If you’re really lucky, you can find a willing shaman to cure some of the damage, but there’s no guarantee.

The other major issue of which you should be aware is that while you aren’t racing another character, you are racing this weird purple fog. The fog surrounds each island, and it encroaches at a set rate. It’s not necessarily lethal, but you won’t be able to see much. I mention luck above, and your luck will make or break CE2. Combat is based on dice rolls, which can go south, regardless of whatever planning you might do. Furthermore, CE2 incorporates a host of random exploration events, which can go very, very badly for you. It’s entirely luck-based, and I found that extremely frustrating.

The other real downside to the game is just how long some of these story missions take. Yes, you can pause and restart, but depending on how long you go between pausing to deal with your real life and picking the game back up, you can possibly forget the context. In a game that depends on making clever moves and planning ahead, that length can and does become a real drawback. 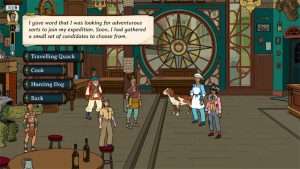 Visually, the game is nicely designed. I liked the Steampunk vibe and found that the cartoony visuals tied into the atmosphere quite nicely. I also liked that your primary character feels a bit like a 19th century Miss Frizzle, particularly if you choose to play the character with a more anthropological bent. The game’s soundtrack mostly just exists. It doesn’t really add to or detract from the game experience, and I barely took note of it. 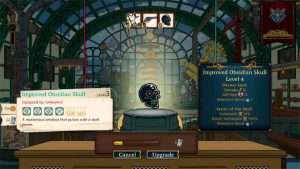 Story-wise, if you’re looking for something deep and meaningfully plotty, this is not the game for you. The story sort of matters in that the campaign missions play into it, but really, we’re all there for the exploration and the treasure. I am a treasure-fiend. I annoyed my husband greatly when we played through Diablo III together because I’m a completionist. I need to clear the entire map and grab every item, and given the fog and the sanity issue, CE2 isn’t entirely conducive to that style of play. However, there’s enough treasure to be had to keep the game interesting. CE2 is a roguelike game with heavy resource management and light RPG elements to it. I will freely admit that this will not be the game for everyone, given the game’s emphasis on luck. However, I found the characters engaging, the world rich, and the islands interesting enough to keep accepting that next mission. Do I wish some of those missions had been shorter? Yes. Was the game engaging and fun? Also yes.