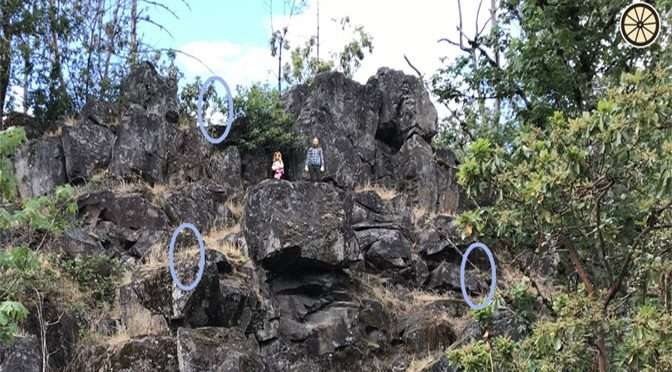 Remember Too Many Santas? Well, my friends, the developer, Oh, A Rock! is at it again, but this time, we’re not as concerned with Christmas spirit as we are with…Oregon? I confess, I’ve never been to Oregon, but I can tell you that all of my years playing Oregon Trail finally, finally proved useful. The Lost Oregon City Gold is a point and click adventure game in the same vein as Too Many Santas, but this time, Oh, A Rock! have added more complex puzzles, sword fights, and the occasional death scene. If you find yourself in need of some solid edutainment with a side of “what the heck?” this is the game for you. 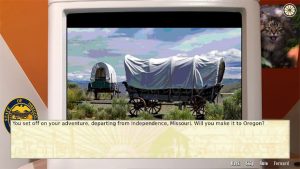 Michael and his daughters Mary and Rosie happen to be descended from Sheriff Holmes, who held office during an infamous robbery. More importantly, however, as the trio discovers from the clues he left behind in the family attic, he was an active participant in said robbery. Those clues therefore serve as a treasure map to the location of $25,000 worth of gold bars. However, our intrepid trio isn’t the only group after the gold. Hint: look for familiar faces. Will they find their gold? Will they all survive? Will they stumble upon the correct name for the dog? Only you can answer those questions, literally. You have to point and click on the appropriate dialog option. 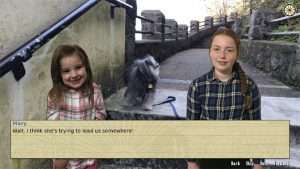 While I mentioned earlier that The Lost Oregon City Gold is in the same vein as Too Many Santas, I should probably warn you that despite what the games share in terms of visuals—both use photographs of real people as graphics—City Gold is a very different gaming experience. Too Many Santas is a polished dating sim. City Gold is a satire of the edutainment games we all played in high school (or, you know, college, but we aren’t going to talk about that). At one point, the game even incorporates elements from the Oregon Trail games, which clearly served as an inspiration for City Gold. 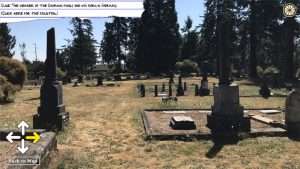 Knowing this, you should now be prepared for whatever the game throws at you. I mean, you won’t be, but keeping that in mind will help you make sense of the bits and pieces that feel out of place. For example, Shady Sheriff Holmes uses GPS coordinates in the clues he leaves, and considering that the theft allegedly occurred in the 1860s, that’s clearly an anachronism. The game is definitely aiming for a “so bonkers it’s great” kind of vibe, and it largely manages to make it. 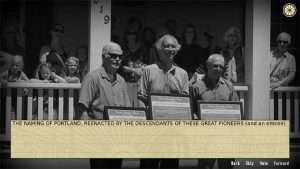 The game’s real selling point, however, is that it takes you through a surprisingly thorough examination of Oregonian history. I confess that I knew exactly nothing about Oregon—aside from the fact that dysentery was involved—so this was new territory for me. Given the game’s historical bent, I did wonder if the stagecoach robbery that gives rise to the entire game actually occurred, and while I didn’t find anything specifically about Holmes, the entire fiasco feels to have been adapted from the events in Sailor’s Diggings in 1852. An outlaw gang blew through a mining community, slaughtering people, and stealing what was $75,000 worth of gold then before being slaughtered themselves. The gold, mind you, was never found. 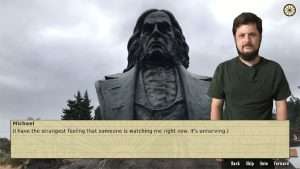 Fortunately for Michael and his girls, this particular gold can theoretically be found, but you have to make it through thirteen-ish puzzles in order to do so. The puzzles aren’t particularly difficult, but I happen to think that half of the fun is giving the wrong answers and getting the hilarious result. It’s kind of like a very low-key version of emptying out your sanity meter in Eternal Darkness just to see what the game would do. Much like Eternal Darkness, certain choices will result in a game-over screen that criticizes all of your life choices up to that point, including your parenting choices. I need you to stop seeing me, Game.

That said, the real difficulty in game play arises from the use of what is quite possibly the worst navigation system I’ve ever seen. Getting to the puzzle location is no big issue; that’s just a matter of clicking on the appropriate red dot that appears on the map. 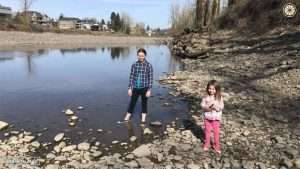 However, once you get there, that’s when things go a bit sideways. You click on a d-pad that appears on your screen to direct your stalwart heroes in whichever direction, but there’s not generally a lot of guidance as to where you should be going. You can mostly tell based on whether you have a “forward” option as that’s a good sign, and if you run into, well, a wall of trees, you’ve made an error. That doesn’t sound difficult, and it isn’t. It is, however, incredibly annoying to navigate. 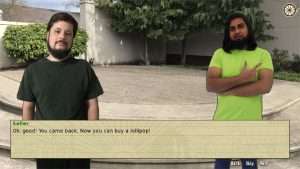 The Lost Oregon City Gold retails for $6.99 on Steam and is worth every penny. You know you’ve spent $7 on sillier things. 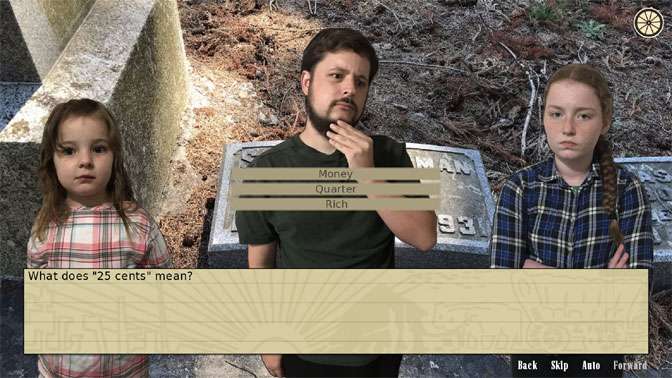