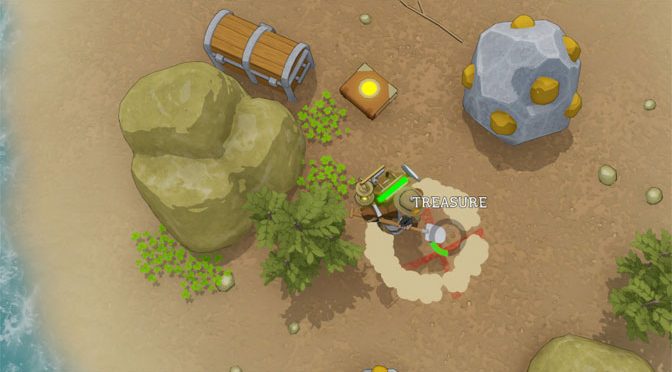 Very rarely does a game find a way to become something that will offer satisfying gameplay to just about everyone, but I’d argue that Scrapnaut manages. Billed as a top-down, survival game, I would never have picked it up for myself, precisely because I’m not interested in that kind of game.

Look, I played enough Oregon Trail in my life. I don’t need to die of hunger anywhere else, thank you very much.

However, Spiffybit, Scrapnaut’s developer, recognized that gamers like myself exist and created options that would appeal to me. As such, Scrapnaut offers a range of flexibility in terms of what gaming experience you can have, and I think that alone rates giving Scrapnaut a second look. 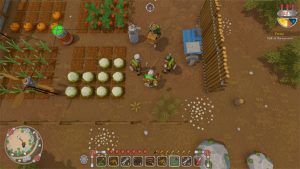 You awaken onboard a crashed airship, straight out of a Steampunk afficionado’s dream, and from there, it’s up to you to build and craft your way to survival. You have a wide map to explore that contains an array of climates. There are ruins left behind by a mysterious civilization that you can cannibalize for parts and materials, and depending on your choice of difficulty level, you might encounter robots bent on your destruction. 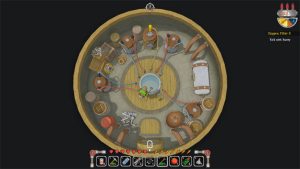 Scrapnaut also includes hunger and energy meters that determine how much your character can accomplish on his mission to survive in this wilderness. Plus, remember those robots I mentioned above? They do engage in base raids, and you can create turrets and even a version of a mech that you can kit out to your heart’s content. Scrapnaut also offers an online mode that allows you and up to four other people to cavort around killing robots together.

There is a vague story, but in all honesty, it’s not really the point of the game. 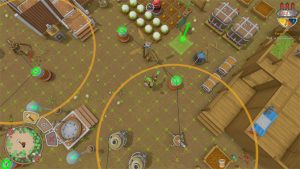 First, please allow me to cover the game’s real appeal for me, which was the control over the kind of gameplay you desire. You have the option to select between Easy, Normal, and Hard modes, and the major differences between them stem from the rate at which your hunger and energy meters exhaust as well as the frequency of base raids. There’s nothing really novel there, but Scrapnaut also offers Peaceful mode, which eliminates the base raids altogether and slows meter exhaustion to a crawl. Selecting Peaceful mode, therefore changes Scrapnaut from a survival game to a farming/gathering sim, and I’m honestly not ashamed to admit that’s how I opted to play the game.

Look, I get it. Lots of people go in for the thrill of constant menace, and for those that want to test themselves against everything Scrapnaut has to throw at them, the game has them covered. If that’s your bag, you can even go online and find like-minded folks, and if the combat is anything at all like the hunter/gather mechanic, it’s likely well-designed. However, not everyone wants to relax that way, and I really, really, really appreciate that Spiffyfit offered me the option to go from Borderlands to Harvest Moon: Steampunk. 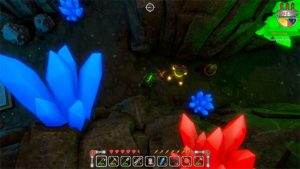 Scrapnaut also deserves some credit for the map breadth and diversity, and more importantly, the game provides Teleport points that allow you to cross large amounts of that territory without getting stuck walking back on your own, meaning that Scrapnaut avoids the trap Blizzard fell into with the Barrens at WoW’s inception. Scrapnaut is thus better able to be open world without becoming a bore to play. 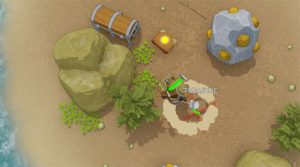 There are other aspects to the game that keep it interesting, including treasure recovery and unlocking new recipes for crafting everything from alchemical concoctions to weapons. The game does offer quests, but be aware that you have to have the quest item equipped to complete certain objectives. If you find yourself stuck at turn-in, that might be your issue. Not that I have experience with that. At all. 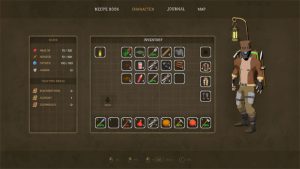 Visually, Scrapnaut has simple, clean lines and trends toward a cartoony art-style. The audio is peacefully innocuous, and I found myself tuning it out more than anything else. I did make a brief foray into combat, and from what I can tell, combat is just straightforward button-mashing. That style certainly has its place, don’t get me wrong, but if you’re intending to play Scrapnaut for any length of time, I can see how that would get irritating. I didn’t actually try out the online play, but I liked that the game offered it as an option.

Menu design is pretty clean and intuitive, but you do have to cycle through a lot of them to get anything done, and I do think that aspect of the game could be simplified. Conversely, I think some of the visuals could be improved upon; there’s something odd about your character’s movement. 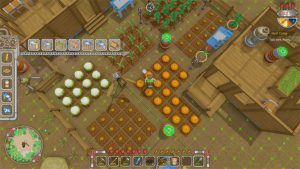 Scrapnaut will never be the kind of game that will wow you with its story or gameplay, but it’s a pretty solid way to wind down after a long day, particularly if you opt for Peaceful mode over some of the more combat-heavy modes. However, if it’s been the kind of day when you find yourself in dire need of being able to Office Space something, you can find that kind of thing in Scrapnaut as well.

In essence, Scrapnaut is a solid game, if it doesn’t stand out in any real way.

Scrapnaut retails for $12.00 on the Nintendo Store.