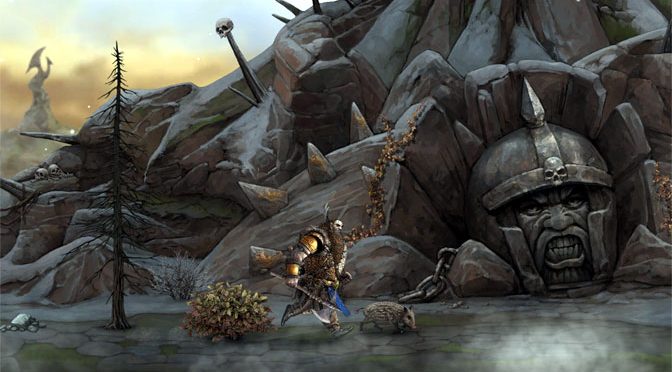 Greetings, my gaming friends and family! And welcome to The Modern Gamer! This is Sumroad, typing from nice place called Niffelheim, well… it isn’t that nice, actually, it’s a bit dark, humid, cold and… grim. Anyway, it doesn’t matter; I only care for you guys and be in the middle of the action to give you the best content available. As I said, I’m in Niffelheim, invited by a dear friend of mine, although he is outside all day. This is my first time in here and honestly it isn’t that terrible, my friend does have a nice fire and some furs to get comfy enough to forget about the ice-cold weather. 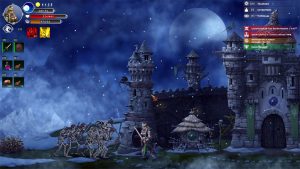 Ok, let’s talk a little bit about Niffelheim. In the Norse mythology, it is the “World of Fog” although it’s not entirely fog in here, like I said, it is cold, and there’s a lot of ice, and of course, it is misty. Oh…I forgot this is the home of the primordial darkness too, so you could imagine, this isn’t exactly the most exciting place to be, unless you like this weather, I mean, I really enjoy cold and misty, rainy weathers, but not enough to live in here. I can ask for a real estate agent if you want though, my friend should know. 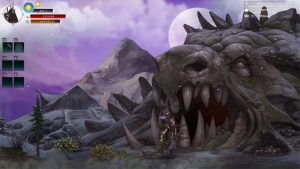 So, what’s about Niffelheim? Well, this game isn’t new, it was actually released in 2016 but it wasn’t until 2021 that Ellada Games decided to release it for iOS (sorry folks, no Android atm) and I believe it makes perfect sense, it is the kind of game you’d like to play everywhere, and if you don’t own a Switch, then it is the perfect time to get your hands on Niffelheim. Now, this game is a 2D adventure/survival, in fact it also feels (somehow) like the old school platform games like Altered Beast or Castlevania. In here, you are a brave but fallen warrior in battle, and so, you have gained the right to go to Asgard to have a few drinks with Odin, but instead of party, you find yourself in Niffelheim. At the very beginning, you can choose between four, say, classes, Viking, Valkyrie, Berserker and Shaman; every class does have its particularities but, in the end, the game doesn’t change much and I’ve found that it’s not like the game is easier or harder, or better with any class, you can even blind pick one and you’ll be perfectly fine. 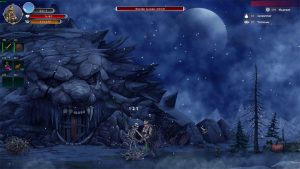 Then, you wake up in, this place right in “your” land, right in the ruins of an old fortress so you take over. The main goal here is to get 22 pieces of a sacred relic and thus get your ticket out of this place. Yes, how are you going to do that? Well, it’s not going to be that easy, Niffelheim is a place where you can get some resources, ergo, you can use them to craft gear and upgrade your fortress, in the way you will find foes, caverns, dungeons and of course, bosses. You will also get the best gear and stuff out of the most powerful fiends as you progress into this realm. Although, your gear isn’t permanent, it wears down and you will need to constantly craft new one in order to keep slaying your enemies and you will also have to switch between gear to kill specific foes. As you could imagine by now, your health decreases overtime and it drains faster by collecting resources, and fighting enemies, which means, you need to rest and eat to get your batteries up again. There are also Ancient Thrones where you sit and recover. 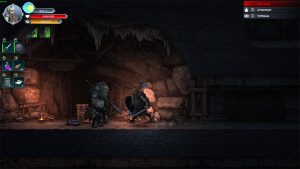 The fighting controls are basic enough to believe the battles will be easy, but it’s not easy in here. You can attack from the distance with your bow, get into close combat with your sword, axe, etc. and go defensive, so even when you have minimal options, your enemies will put you to the test, also you have to remember that your gear is finite. Now, let’s say you die, well then, you will be “permanently” debuffed, and you will recover yourself by drinking an elixir to wash away the hangover. You will also have to get back to your body to resurrect, so get ready for long walks sometimes. But not everything is bad in Niffelheim, if you remember I told you guys you can craft stuff, which means you can also cook and play alchemist to make your own potions and elixirs to beef you up.

Then, at nights, enemies will come out of the deepest darkness to attack your fortress so you’ll have to be there to defend it, if not, you will find more ashes over the ashes. 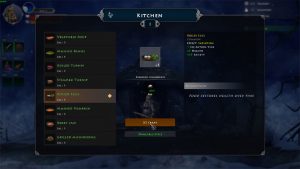 Technically, the game is good overall, the 2D graphics are well designed even though the animations may feel funny at times, say, like puppetry if that makes sense. The music and SFX matches your adventure, it isn’t really the epic kind of soundtrack or SFX, but dark and utmost grim, and I believe it is a great choice, because it really makes you feel you’re there. Having heroic and epic music and SFX would be negative in my opinion, despite the fact that it would pump up your fallen soul into combat and such, you’re into a dark realm, you’re stuck there and you have to keep things into that line, there’s nothing heroic, there’s only room for bravery and the sharpest decision to get out. To survive. 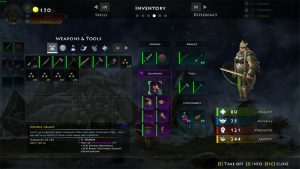 Now, you wonder… is Niffelheim worth playing? I do believe it isn’t a game for everyone, and don’t get me wrong I do like it, I feel it’s challenging enough although some mechanics and controls feels rough on the edges. Also, it can be frustrating for some players to die easily, and cannot be able to fully recover until getting the right potion of elixir, the fact that everything is finite in this game could be a huge turn off for casual players. As I said, Niffelheim isn’t for everyone, it is definitely a game for those who enjoys a decent challenge and can fight the frustration of low health, no gear, crafting, etc. So, in a way it does have some strategy, nothing crazy but you will have to weigh if it’s a good time to go outside or just wait till get enough gear, resources or buffs. All in all, I think Niffelheim is a challenge to ourselves and how well we face this daring realm. 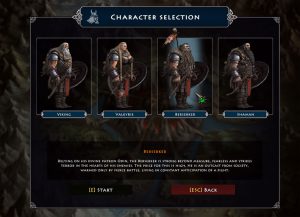 Ok, my friend just came home and he’s got some eggs and rabbit for supper. I tell you guys I feel a little guilty for being here while he was outside but I had to tell you about this place, right? Next time I will go out and hunt with him, that’s for sure! Oh… He does know a great real estate agent so if you feel like moving down here, please let me know in the comments down below and I’ll gladly give you the info ;) This is Sumroad signing out, wishing you an OUTSTANDING gaming weekend my friends and family! Till the next one! Hade!