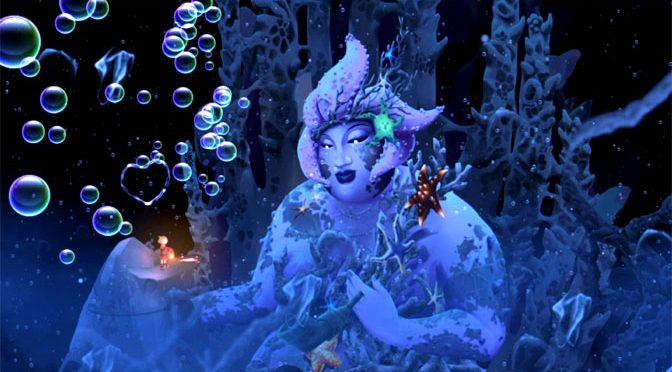 Samudra offers about two hours of gameplay in a submerged, deeply polluted world, and it’s your task, as the boy who falls to the ocean floor, to figure out why those who live on the surface allowed the ocean to become as polluted as it is. Samudra, which is Sanskrit for “gathering together of waters,” takes you through beautifully realized 2D vistas of a world that feels familiar but has been warped by poor stewardship.

The game reminds you of pollution’s lasting impact by forcing you, as a player, to confront just how the pollution attaches itself to the natural world, perverting the landscape in Samudra. If you’re looking for a chill experience, you can certainly find that in Samudra, if you ignore almost everything else about the game.

My recommendation is that you do not. Samudra’s richness lies not in its gameplay but in the message the developers want to communicate to you, the player, via the medium of the game. If you want to enjoy all that Samudra has to offer, leave yourself open to the experience. 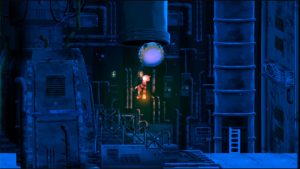 You play a young boy named Trip who falls into the ocean and sinks all the way to the bottom, which has become choked with pollution. Trip lands among floating plastic bags, straws, empty cups, and other detritus and realizes that he must make his way back to the surface. On your way back to the sunlit lands, you dodge fish, escape trash-encrusted crabs, and nip around spotlights to remain unseen, all while unraveling the puzzle of what happened to the ocean. 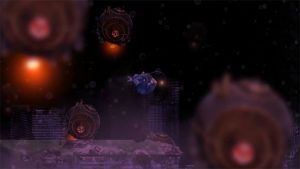 Samudra features five chapters in total with two potential endings, and you solve different puzzles by interacting with Trip’s environment in order to reach the final level and ultimately the surface. Your journey will take you through submerged factories, downed planes, and the crumbling wreckage of what looks to be a city. Along the way, the lantern you borrowed from an unusually large angler fish will cause hieroglyphs carved into the rocks around you to glow, revealing pieces of the story. You’ll use every aspect of your environment, sometimes even the fish around you, to reach your end goal, but you will definitely need to pay close attention to Trip’s surroundings as determining what you may use and where you may take Trip will not always be immediately obvious.

Trip confronts the past actions of his fellow Surface Dwellers, and while he may learn something over the course of his journey, the game does not offer him the opportunity to rectify their errors beyond what he accomplishes under the water’s surface. Samudra leaves it up to you, the player, to decide whether Trip can go on and continue the work or if everything continues as it is, a testament to the results of horrific environmental abuse. The game pulls no punches on that front, which results in an ending that stays with you long after the final credits screen. 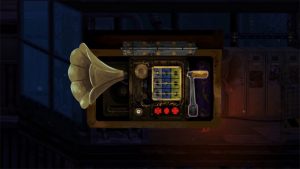 If you think Samudra will offer you a traditional puzzle/adventure game experience, you should drop that assumption right now. Samudra’s gameplay does rely greatly on puzzles, but the puzzles do not generally pose real challenge because the puzzles aren’t the point. The point is Trip’s journey and what you, the player, learn from it. Samudra’s messaging is far from subtle. You know from the very opening sequence that you’re going to be playing a game steeped in environmental awareness. Trash covers nearly every surface visible, including the backs of some of the creatures with which you will interact. Garbage chokes the water, and while you think you should be able to grab said trash, you generally can’t. The floating garbage forms Samudra’s background, a never-fading visual reminder of what exactly the game wishes you to consider. 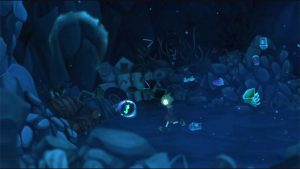 The pollution affects everything. One of your main sources of aid in your solitary journey happens to be a guitar-playing octopus decked out in a gas-mask, and that image will be repeated with some of fish you’ll see. At least one similarly clad species will attempt to ram you, and once the gas mask falls away, the fish’s mutation is immediately apparent. Unlike Trip, who wears an antique diving helmet, these fish have adapted surface technology in order to survive their horrifically polluted environment. Other fish, mostly the final boss areas of the chapters, will be more direct victims of abuse. At one point, Trip saves a turtle who’s been chained so long that the chains have deformed her shell, recalling the famous images of turtles caught in six-pack rings. The developers likely mean you to make that link between the images. 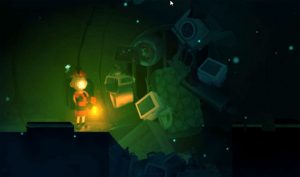 From a story standpoint, Samudra accomplishes its goal, impressively doing so without any dialogue, but the gameplay leaves something to be desired. Samudra uses the standard ASWD keys for movement and the space bar for anything requiring interaction. Bubbles containing icons alert you to upcoming puzzles and solutions, but seeing as the keystrokes are so limited, the puzzles themselves are similarly restricted. More often than not, your solution option involves repeatedly smashing the spacebar, at least early on in the story. Don’t expect the controls to be terribly accurate, either. Fortunately, Samdura’s puzzles don’t rely on perfectly timed actions, but the controls do feel rather sticky at times. You will therefore have to develop a good sense as to when you should begin pressing that spacebar in order to get the result you want. 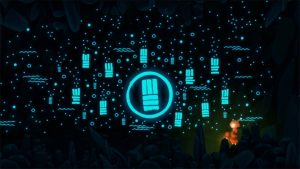 You’ll also need to learn Samudra’s visual language in order to solve those puzzles and avoid unnecessary restarts. Yes, Trip can die, but the only penalty the game offers is to force you to replay the section in which you failed to solve the puzzle. Finding that solution relies on you recognizing nooks into which you can dive in order to take cover or identifying the faintly glowing moss that indicates a particular area in the environment will be climbable. While that sounds like something you should initially notice, remember that Samudra takes place underwater. The game’s background plays around with bioluminescence as a visual element frequently. Samudra is rendered in beautiful 2-D graphics, and despite that beauty, sometimes recognizing the necessary nook as being the puzzle solution rather than an artistic element present to give the environment character is trickier than you’d think. However, once you do learn to identify those elements, you’ll be off to the proverbial races. 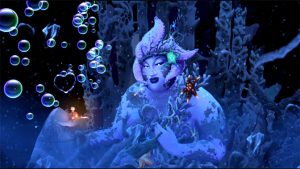 Aside from the game’s technical issues, Samudra’s main emphasis is on its message, and while the gameplay affords players the ability to explore different aspects of that message, Samudra frequently relies on cut scenes and scripted sequences to convey the story, especially toward the beginning of the game. The result is a game that feels frustratingly long. The scenes serve to prolong the game, much the way the “pass go, collect $200” mechanic in Monopoly does. As someone who has suffered through her fair share of Monopoly games, please let me tell you that the comparison is not meant to be complimentary. 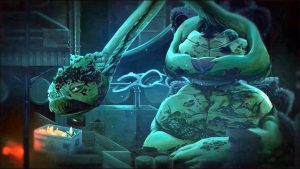 The game does have a streamlined feel, as if Samudra means to break the puzzle experience down into its simplest form. Generally, I appreciate games that play with my assumptions as I play through them, but Samudra’s puzzles have solutions that feel either too obvious or too arbitrary. Again, I understand that the point of the game is not to challenge you with its puzzles so much as with its message, but adding a touch more complexity would add some appeal to replaying the game. Samudra’s developers clearly envision that you’ll replay the game, which is why there are at least two endings, but I’m not entirely certain that I will. 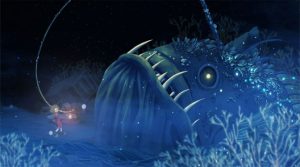 In part, my reluctance to replay stems from the game’s sluggish pacing, but some of it also flows from the more distressing elements of the game. In Chapter 1, you run through the fuselage of a downed plane, and as you move along, the corpses of the plane’s passengers will pop out at you. Samudra isn’t going for a jump scare here but rather seeks to imply that the bodies of the lost form a source of pollution that’s more tragic than the old tires. At one point, you pass the skeletonized remains of a parent holding a child, which implies some pretty horrifying things about how they died. Plus, if you’ve experienced the loss of a child, you should probably be aware that the image exists. You pass that in order to reach the snack cart, on which the corpse of the flight attendant still leans, and you ride that cart to the next puzzle. For additional flavor, the flight attendant’s skeleton gets transferred to the pile of trash covering the next threat. I really do understand that Samudra wants to make a point about how necessary protecting our oceans is to our own survival, but that’s kind of a lot for the first twenty minutes of the game. Both of the game’s endings reflect this same darkness, so don’t really expect the tone to improve as you go through the game, either.

Beyond the main storyline, you have the option of collecting bonuses in the form of either fish or pieces of trash floating in bubbles. The idea seems to be that you’re rescuing the fish and cleaning up the trash for achievements, and while I like the idea, I wish that aspect were more central to the story. I had a very real urge throughout Samudra to clean things, and I have to say that my house probably benefitted from me playing the game. Still, that seems like a missed opportunity for Samudra.

Samudra offers roughly two and a quarter hours of fairly streamlined puzzle gameplay. Despite the shortness of the game, the pacing is frequently sluggish, and there are a fair few missed opportunities to expand on the game. Be on the lookout for some disturbing imagery that may render the game not appropriate for some players. However, if you can look past those issues, Samudra is a gorgeous, submersive (ha!) experience with a serious message. The game comes in at a very reasonable $13.00 on Steam with the added bonus that proceeds from the game’s sales go toward activism by the Indonesian environmental activist circle with the goal of reducing the Indonesian use of plastic by 70% by 2025.