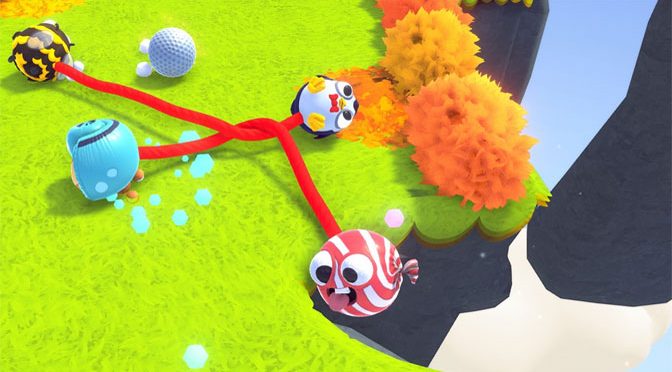 Fling To the Finish

Fling to the Finish is a racing game with an interesting twist, so if that’s your bag, there’s a lot to like about Fling to the Finish. The primary drawback is that the game really does feel designed to be played best with multiple players. You can play Fling to the Finish as a single player, but you will be splitting your attention between your keyboard and mouse.

Aside from that, Fling to the Finish is a surprisingly fun, polished game considering that it’s still in Early Access on the Steam platform, and has yet to make it to the Nintendo Switch, where the developer says it will eventually land.

Because Fling to the Finish is a cooperative racing game, there isn’t much in the way of plot. You and your partner, if you have one, play racers tethered together by an elastic band and try to navigate race maps jam packed with obstacles. Cooperation is key to success in this game because you’ll both have to use various tricks in order to keep each other squarely on the maps. If you’re playing alone, you’ll control both racers simultaneously, one with the keyboard and one with the mouse. That’s it as far as plot goes. 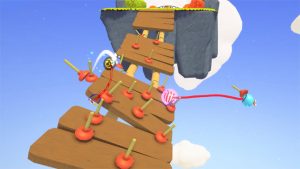 Let me be clear here. Fling to the Finish is not the sort of game that I like to play, and as a result, I’m not terribly good at it. I therefore found my time on the maps to be an exercise in frustration. However, despite my own antipathy for the experience, Fling to the Finish is a really well constructed game, especially considering the game is still in Early Access after releasing on August 23rd. The maps are unique and pose interesting challenges that capitalize on the unique “tethering” mechanic that sets the game apart from others in the genre. The art-style is adorable, and the music sets the overall wacky tone for the game.

The game offers assorted modes including private race and campaign modes, and you and your partner have the option to play against the clock or against other players, locally or online. I do recommend playing the game with at least one other person. While the challenge of controlling both racers at once will appeal to some, I can certainly see how it would frustrate others. Frankly, the game is designed to be played cooperatively. Playing solo, while possible, presents a far less entertaining experience. 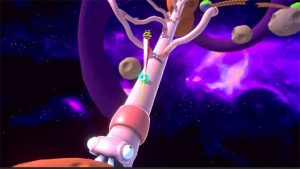 Gameplay itself, even with another player, poses some interesting challenges. Your characters are exclusively spheres, so you never stop rolling, though there is a “stick” option that allows one player to remain in one place which means the other player cannot roll off too far beyond the sticking player. That’s an especially useful skill when used in combination with the “fling” mechanic from the game’s title. One player can use the tether to toss the other player over an obstacle or up a ledge. Players can fling their partners back onto the race course when they’ve rolled off into the friendly-looking abyss. Otherwise, players will have to avoid getting their tether caught on poles or around cacti in order, or they’ll lose precious time unwinding themselves. In a game that’s all about speed, avoiding those pitfalls is critical.

The level designs really play with the game’s physics beautifully, and I have to admit, I did not anticipate the level of detail they contained. They’ve got cliffs, ledges, and random posts, to be sure, but there are also levitating targets on which both players will need to stick in order to reach the next stage of the race. Beyond posing gameplay challenges, I particularly appreciated the tongue-in-cheek visual designs. For instance, one level had a desert theme, and while some of the hazards were in fact cacti, they also included aliens and Area 51 fencing. I thought these elements made for an engaging landscape and reflected a certain sense of humor among the developers and designers. 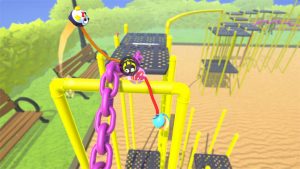 As far as the controls go, my only real complaint is that the fling targeting seems a touch random. I don’t know if my issue stemmed from the fact that I was trying to juggle both players at once, which reduced my ability to aim effectively, or if there was a trick to it that I just missed. Either way, I couldn’t control where I happened to fling my other racer. However, that complain is fairly minor and doesn’t really even need addressing. The randomness of the flinging can just as easily be chalked up as being part of the game’s wacky feel. 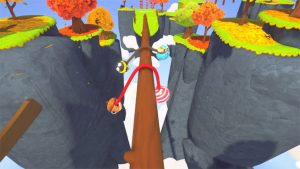 I see Fling to the Finish as being a great family or party game, especially when played on the Nintendo Switch. If you’re looking for Mario Kart with a twist, Fling the Finish will fill that need quite nicely, and it’ll definitely be a great game for kids. While you can certainly play the game solo, I don’t really think it’s worth doing so when other games offer much better solo-gaming experiences. That said, if you want the challenge, your mileage will clearly vary.

You can find Fling to the Finish on Steam for the eminently reasonable price of $14.99. 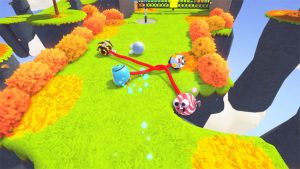