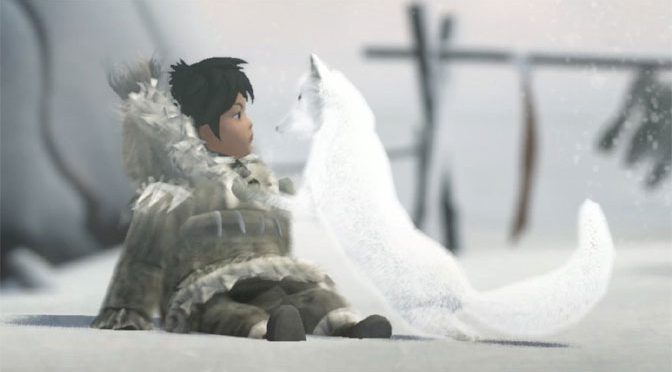 I’ve reviewed Attentat 1942 and Svoboda 1943: Liberation, and both of those were history games in the sense that the game was the delivery mechanism for the history.

Never Alone: Arctic Collection is somewhat like them in the sense that the point of the game is to convey the beauty of the Inupiat culture that inspires the game.

Where Never Alone differs from the Czech history games is that Never Alone is actually meant to be a game, rather than an interactive anthropological treatise. Never Alone both succeeds and suffers for it, but the game is so beautiful and the world so fascinating that I hope you forgive the game for its weaknesses. 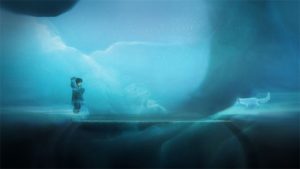 Never Alone sees Nuna, a young girl, befriend a most unusual arctic fox and the two traverse the frozen wilderness in order to investigate a strange blizzard that threatens Nuna’s village. Along the way, you pick up more-or-less hidden collectibles that trigger videos involving individual Inupiat telling you a little bit about their culture and histories mixed with beautiful shots of the Alaskan wilderness. You have the option of skipping these videos, but you really, really shouldn’t. The stories fit beautifully with the points at which they occur in the game and endow the events unfolding around you with meaning and symbolism that you’d miss otherwise. 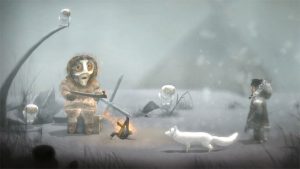 The game opens with the text “Kisima Ingitchuna,” which translates to “I am not alone,” and the game really does emphasize the interconnectedness of Nuna’s world and by extension, that of the Iniupiat. The game’s plot is based on Inupiat folklore and traditional stories, particularly “Kunuuksaayuka.” That story focuses on a young boy who journeys out to discover the source of a blizzard and comes across Blizzard Man who is using an adze to carve up snow that gets carried toward the village by the wind. The boy steals the adze and then runs back to his home where he hides with his mother in their hut, refusing to return the adze to Blizzard Man. Blizzard Man, having followed Kunuuksaayuka to the hut, screams for his adze, but the boy stays strong. Eventually, Blizzard Man leaves, and the weather around the village returns to normal.

In the game, Kunuuksaayuka has become Nuna, but the themes remain. She is an unlikely heroine who still stands up against adversity, using her wits, aid from the magical fox, and the teachings of her culture. She faces the implacability of her harsh environment, but I don’t think her story is that of conquering adversity. Rather, it’s about restoring balance, which is an important distinction. Never Alone is about being part of the world, and while Nuna is on this great journey, she’s not a chosen one. At one point, one of the speakers observes that Inupiat do not consider themselves to be the most important creatures in the world, and this ethos informs the entire game. It’s a welcome change, really, from the more traditional narratives we see in video games. 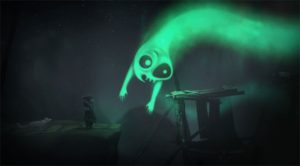 The game’s art style also takes inspiration from traditional Inupiat visual design with a great eye for detail. Nuna’s clothing sports lovely design touches, for example, but mostly, the game is simply beautiful. The developers have done a tremendous job blending the traditional with a clean style that translates well into the game experience. The soundtrack is just as clean, given that it’s carefully minimalist. The game’s backdrops move from icy tundra to frozen caves, and always in the background, you can see the northern lights. In 2017, Dima Verovka from E-Line talks about wanting to create a mood, and honestly, I think they nailed it because I definitely found myself getting sucked into the world they were creating. I haven’t really felt this engaged in a game setting since Hoa.

However, the game is careful to remind players that Nuna’s world is hardly safe. In Never Alone, yes, Nuna can die, and sometimes, it’s pretty terrible. Death doesn’t necessarily mean much, but it does reinforce that Nuna’s environment is unforgiving. Even before she gets to the supernatural characters in the game, Nuna must contend with hungry polar bears and icicles. 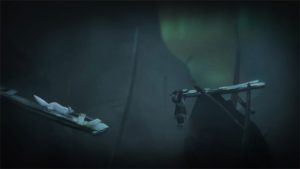 In terms of actual gameplay, this is where Never Alone falters a bit. Never Alone is a fairly standard puzzle platformer, though you do have the option to switch between Nuna and her fox companion. In other games, that switch feels more gimmicky, but in Never Alone it becomes a metaphor for the interconnectedness of the Inupiat world. Generally, it works beautifully, and then all of a sudden, the mechanic goes a bit pear shaped.

I don’t want to be too specific about this because it’s important to the narrative. Generally, you walk Nuna and Fox through the world, jump from spirit to spirit, and solve relatively simple puzzles, and then, the difficulty level just quadruples. For me, the shift represented a hard left turn in what had been a really enjoyable and fascinating experience, and y’all, I didn’t care for it. I expect the difficulty level in a platformer to change, but normally, these games offer a learning curve. I didn’t feel that Never Alone did. 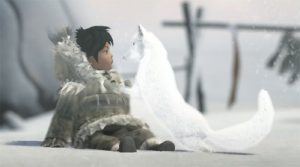 Add to that the problem that Never Alone’s Switch port brings with it some truly frustrating bugs. There are moments when a delay between button push and in-game effect rendered a fairly clear puzzle nearly impossible to solve. The game has deeply frustrating camera shift issues and a host of other problems. Never Alone’s initial release was plagued by crazy bugs, and I hate to see that experience translated to the Switch so much later after the first release.

I also have to admit that Fox gets a bit of a short shrift. Fox controls the spirits that form the platforms, but most of your game time with Fox is spent lowering platforms. That simplistic approach to the joint dynamic makes the game feel a little more tedious than it should. 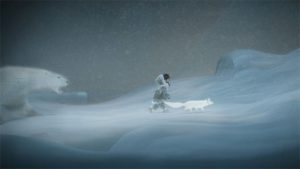 Despite the game play issues, Never Alone offers so much else to commend it, from sheer beauty of the game to its fantastic thematic structure and emphasis on generational wisdom. There’s a fair amount of the story that I feel I didn’t quite get, but to be fair, I’m not Inupiat.

In terms of skills required, Never Alone is a standard platformer, but you may need some extra experience in order to cope with the Switch port’s bugs. Overall, Never Alone is a solid game and one that you can share with younger children, especially since the game has such strong educational elements.