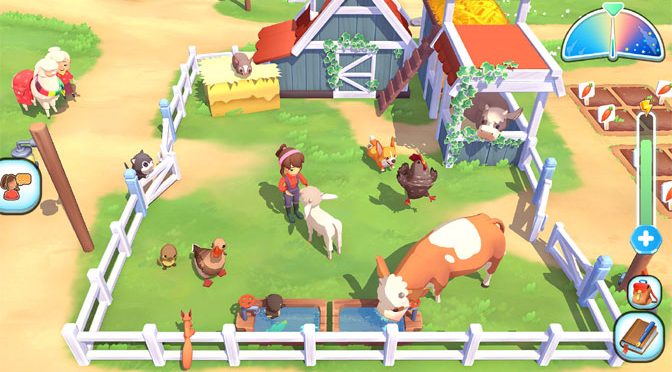 Like many folks during the pandemic, I picked up Animal Crossing: New Horizons and loved it. Big Farm Story feels very much like what that game could have been had Nintendo opted to expand its horizons, pun solidly intended. Big Farm Story, as the title implies, does involve a story that you follow and in so doing open up access to different characters, a market, and more.

The game offers the same gentle feel that ACNH does, but there’s just more going on and more that you can do with Big Farm Story that makes it a great game to play when you need to take a breather from the stress of an ongoing pandemic but want a little bit of brain stimulation. 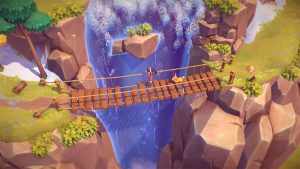 The game begins with you learning the basics of farming from your grandfather, and then, there’s a significant time jump. As an adult, you receive a letter that invites you to come and take over his farm. You rush to the farm only to discover that it’s been damaged by a storm, and your grandfather is missing. You spend the rest of the game searching for him, growing crops, decorating your house, appointing your farm, and completing general tasks for the characters in game. 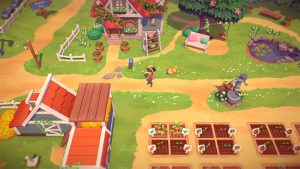 You’ll notice that the plot section is fairly short, and I’d guess that’s by design. While there is a plot, the plot is somewhat secondary to what you’re actually doing, which is farming, harvesting, collecting resources, and crafting. To what end are you doing these things? Honestly, I’m not sure, and neither is the game. Big Farm Story is very much the sort of game that you play in brief chunks, much like ACNH. However, unlike ACNH, this game isn’t tied to a real-time clock. You can advance the gameplay simply by retiring to your bed in your little farm house, which is convenient for growing crops. The game forces you to sleep at given intervals marked by an onscreen daytime tracker, and if you don’t manage to make it home, you will simply pass out wherever you happen to be standing at bedtime. However, if you log out before going to sleep, the game does not advance. 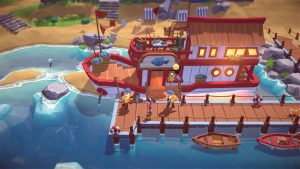 While you don’t technically have a time limit for actions, you do have an energy bar, which governs how much you can do in any given day. Walking does not seem to affect your energy, but digging up resources, completing quests, and growing crops does. I imagine that exhausting your energy bar will force your character to collapse in place or result in a warning to return home. I never managed to hit that point because I found myself needing to advance the days anyway. This feature is fairly key because one of your early quests involves raising a chick in order to garner eggs, and that, my friends, is an involved process. You have to restore the coop, which requires resources. You have to care for the chick using actions you may only perform once per day. Once you’ve gained a certain number of points, your chick matures, and then, you have to wait for it to lay eggs.

This particular quest highlights one of the game’s weaker points, which is that it tries to straddle the line between a short point and click game and something much longer. Big Farm Story would be a better game if it picked one side of that divide and went with it. 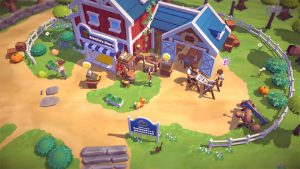 The game does provide some shortcuts. There’s a “repeat” option for planting a crop in a plot. If you don’t choose to repeat the same type of seed, then you have to click the plant icon, select your seed, and then plant it. None of that seems time-consuming, until you’re planting several plots at once. After planting, it’s all about hurry up and wait. Some crops, such as your early carrots and wildflowers only take a day or so to grow, which becomes important as an early quest has you planting wildflowers to be made into medicine for a sick little boy. Others take significantly longer, though the rewards associated with those crops seem commensurate with the timeframe. The farming mechanic does get tedious, so fair warning. 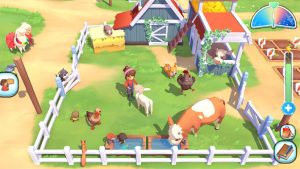 The game’s music and graphics contribute to the general pleasant ambience. Even when Levi, falls ill, there aren’t any consequences to taking an extra “day” or two to collect the wildflowers. The game dialogue is wholesome, pleasant, and upbeat, and while the game does offer you the opportunity to select slightly less pleasant responses, overall, your dialogue options fall into the same pattern. Your surrounding environment is equally pleasant, with bright colors and a soothing soundtrack. 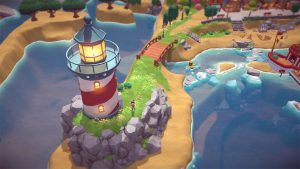 Big Farm Story also offers the opportunity to personalize your farm and home, which is nice. You’ll know where you can place items based on the dotted outline in your home or the hammer icon next to various locations on your farm. You also acquire pets in addition to farm livestock, and your first pet happens to be a corgi because Big Farm Story is very married to the “adorable” aesthetic. Each pet has the potential for locating various extra bonus items, which you’ll see via the golden exclamation point that appears over the animal. You can also tell that it’s a European-made game because an early bonus is mycology, which unlocks the ability to collect beneficial mushrooms including morels and chanterelles. I don’t see “morels” occurring to an American game developer, and I will say that morels are quite easy to find in Big Farm Story, unlike in real life. No pigs are required. 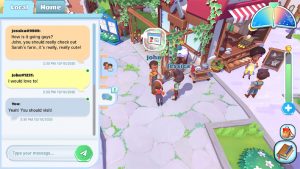 When I unlocked an upgraded Market, I began to notice other player characters interacting in the Townlet, and I was not expecting the game to be open in that sense. Parents might want to be aware that the “friend” feature unlocks fairly early. The crafting mechanic can be fun, but as with the farming mechanic, it gets repetitive very quickly. I do like that once you unlock Mo the Alpaca, you can complete farm contracts from anywhere on the map, which is a nice time-saver.

In sum, Big Farm Story is a great game to play in short snatches when you’re in need of a few moments of wholesome fun. 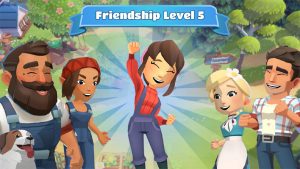