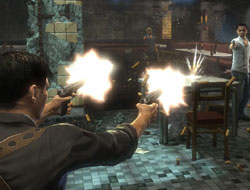 John Woo films are not exactly known for their deep plot, but you certainly won’t be falling asleep at one. The same can be said for the famous director’s first foray into the computer game world with Stranglehold.

Stranglehold follows the adventures of Officer Tequila, a Hong Kong cop that you might recognize from the movie Hard Boiled, which was one of the first films to put Woo on the map. Like in the movie, Chow Yun Fat plays Tequila here so he looks very realistic and sounds very good too.

This game is a shooter, plain and simple. It does have a thin plot told in film noir style cut scenes that are quite enjoyable. At the beginning, Tequila is heading into an obvious ambush alone over his chief’s objections. Tequila looks back and says, "Don’t send anyone else, they would just get in my way." And that sets the tone of the game.

There are no moral choices to make or fine lines of good and evil. Pretty much if they move you need to shoot them. But don’t expect the type of normal gameplay found in Half-life or Quake. Here shooting is done with style.

While you can simply run around shooting everyone in the normal way, that is not really the point of the game. Instead you need to kill with flair. This can be done in a lot of ways. You could jump onto a rolling cart and race through a restaurant shooting bad guys on both sides of you. That would be worth some style points. Or you could slide down a railing, cutting down people coming up the steps as you sail.

And to help you out, almost the entire environment is destructible. So if you see an old air conditioning unit or a glowing neon sign over the head of a bad guy, shoot the object instead of the man. The object will likely explode and fall down, crushing the bad guy and giving you a ton of style points. Style points can be used to unlock some pretty good extras when you spend them at a little bar off from the main menu. But it’s just really fun to try and kill people in ingenious ways. You may end up going back and playing levels all over again just to see what would happen if you shot that propane tank or that loose board you missed the first time around. And it helps that everything you are blowing up or breaking or otherwise destroying looks so darn real.

The levels are really setup for these Hollywood style kills, too much so in some cases. You will find a group of bad guys who thought it would be smart to wait for you by standing under a huge pile of boulders that happens to be held up by a rotting piece of plywood and think "this is too easy." Times like that make the game seem almost like a movie instead of a representation of real life, which might be what the developers were going for, but sometimes the quest to get great looking kills can get to be a bit too much.

You do have some non-environmental help in getting those perfect kills. The biggest one is being able to fall into Tequila time, which is very much like the bullet time found in the Max Payne series. It allows you to slow down time so that you are almost moving around in Matrix mode. You can perfectly aim your shots without much worry that slow-moving bullets are going to get you. Unlike Max Payne which required you to make kills to replenish this valuable limited resource, here it regenerates naturally. It also triggers naturally when you lean out from a corner or are running along a rail when a bad guy pops out.

In addition to the Tequila time, you also have four special moves, which can be activated whenever a meter fills up. These trigger different effects like a barrage attack that gives you unlimited ammo and slow motion for a time and changes slightly depending on the weapon you have when you activate it. Using a shotgun is the most fun, as it really tears people, not to mention the landscape, into bits.

But the most fun special ability is the precise shot. Activate this and you go into slow motion and zoom in on your opponents. This lets you aim for whatever body part is sticking out, even through very tiny spaces. But it can also be used to see different reactions when people are hit in different places. Smack someone in the mouth and they will gurgle blood and spin around before dying. Hitting someone in the leg will cripple them. And popping one into their groin, well, that triggers an almost comical death scene, though I don’t think they find it very funny.

Obviously the game is rated M for mature, and it deserves it. There is a ton of blood in this game and a lot of killing. We are not talking about the blow their heads off type of violence found in the old Soldier of Fortune game, but here everything looks so realistic that you would be pretty angry if bullet wounds seemed fake. They don’t.

My two main complaints with the game are weapons and length. There is not enough of either. There are only a handful of weapons to be found. And the game is a little short. I finished it in about seven hours of play on the easiest level, though it took longer on hard. This does not take into account the replay value as you dive into levels to try and earn more destruction points than before (you are told how many dollars in damage you caused.) And it does not count the multiplayer combat, which is fun but can be a bit buggy with servers seeming to drop out quite a bit for no apparent reason. Also, I dislike the automatic saves at certain areas model. I prefer to be able to save my game whenever I want, especially one like this where going back and replaying a section is a real joy.

To wrap it all up, Stranglehold is the most fun I have had with a shooter in a long time. While it can be played straight up as a shooter, its real strength lies in its ability to let you perform some amazing action movie style kills. And so many things explode or crack or break, you will have a good time just seeing what happens when you plug a stone fountain with enough rounds, assuming you can get the bad guys to give you a few mintues to experiment.

Stranglehold earns 4 and 1/2 GiN Gems, which should be enough to trigger the John Woo style pigeons to take to the skies in celebration (yes they are in the game as well.)