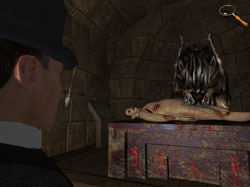 Growing up I read a lot of the stories of Sir Arthur Conan Doyle’s famous detective Sherlock Holmes. And when he started showing up in computer games, I was pretty darn happy about it. Back then it was all point and click stuff, which became the staple interface of the adventure/puzzle game.

So when I heard that Holmes had come back in an adventure game with a fully 3D world, it was like being a kid all over again. But besides the new graphics, there is another twist to Sherlock Holmes: The Awakened that really got my blood flowing. This time Holmes would be going after the minions of another one of my favorite writers, Howard Phillips Lovecraft. Yes, the Elder Gods like Cthuhlu would be plotting against Sherlock Holmes.

I wondered how the styles of the two writers would coincide inside the game. Holmes is no stranger to supposedly supernatural events like the Hound of the Baskervilles. But generally, stories about the great detective are grounded in reality. Meanwhile the world of Lovecraft horror is so fantastic and vivid that it’s almost unbelievable. In fact, a core of the Cthuhlu mythos is that if you learn the truth, your mind won’t be able to handle it and you will go insane.

Could these two literary titans, the founder of the detective genre and founder of modern horror fiction get along?

The game itself centers around Sherlock Holmes, so mostly it’s told in Doyle’s style. But as you investigate the seemingly simple cases, you begin to get pulled deeper and deeper into the dark web of the mythos. It’s great to see how Holmes confronts some truly horrific scenes right out of the mythos with typical arrogant aplomb.

Which makes this a good time to compliment the voice acting found here. Without a doubt, this is some of the best voice acting I have ever experienced in a game. Starting with Holmes himself. The voice is perfect. He has a good British accent and the actor sounds both arrogant and haughty while at the same time a bit vulnerable. Those who read a lot of the Holmes books know that the detective has quite a few personal demons himself, and the voice acting really brings that out without being over the top about it.

But the performance does not stop there. The voice actor for Doctor Watson puts on a convincing act as well, ranging from indignant to insulted to amazed. You get the feeling that Holmes and Watson really do like one another, which is nice. Even the many minor characters you meet along the way sound good and realistic whether they are portraying a warden-like woman watching over an insane asylum or the bartender of a seedy waterfront tavern. I don’t think I ran into one person whose voice sounded out of place.

Graphically the game is pretty good, though there are some flaws. It’s certainly a step up from the 2D point and click worlds from before. You are able to move around the levels like you would in a shooter, though it’s a little stiff in places. When you come to a house with small set of steps leading up to it, you can’t just walk up to the railing and then kind of slide into place, instead you have to move directly to the front of the stairs and approach it straight on. On one level a spiral staircase was very difficult to climb because the game forces you to move along an invisible path in the center of the stairs. If you try to walk along the wall, you get stuck. This seems minor, but getting stuck in thin air all the time is annoying and breaks the suspension of belief you need to really get into a game.

Also, when people are standing around talking, they can be a little stiff. Thankfully, the excellent voice acting covers this up most of the time.

A big part of the game is solving puzzles. Whenever the game puts an actual puzzle in front of you, it is excellent. You are given just enough information to make things interesting, and then can figure out where things go or how things work from there.

Less successful is when you are trying to investigate a crime scene and have to click around on everything before you can continue. This is too much like the old 2D games where every blade of grass had to be carefully studied or you would miss a vital clue. In a 3D world this does not work quite as well because it’s so much easier to miss things in the larger playing field. More than once I had to go to a walkthrough to find the tiny button or fish scale that I could not locate myself despite hours of searching. That lowered the gameplay score a bit because there is no official hint system in the game, or any way to tell you have missed something other than the game not continuing and leaving you to wander around aimlessly forever.

One cool part of the game is when Sherlock Holmes turns to you and asks a question. Suddenly you take the role of a befuddled Watson. Holmes will ask something like "Where should we go next?" or "If you were a killer, where would you hide?" You are then given the freedom to type anything you want, but have to get the right answer. Thankfully you can go back over all the notes the game has taken for you. The game records every conversation you have and logs each piece of evidence you find. So if you don’t know the answer, you can find in your notes, but it won’t be totally spelled out. To get it right, you have to use your noodle. You do have unlimited guesses however. This normally happens at the end of a chapter.

The pacing of the game is about right. As you delve deeper into the mystery, things get spookier as the Lovecraft angle begins to overtake the Doyle one. It is actually very difficult for Holmes to survive this one. In fact, this might be his toughest case ever.

And not to give away a spoiler, but expect someone very important from Holmes’ past to make an appearance, a nice little cherry on top for this enjoyable, but difficult, game.

The Awakened earns 4 GiN Gems and we hope to see a lot more titles like this one in the future.