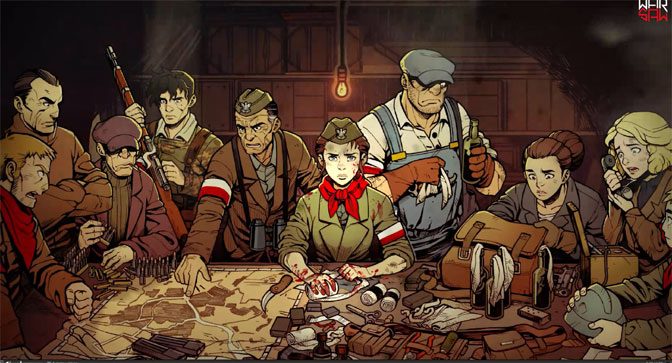 Warsaw is a turn-based roguelite RPG where you take command of the resistance forces of the Warsaw Uprising in Poland, even beginning on the same date as the real life resistance movement. A year after the destruction of the Warsaw Ghetto, you will take control of a force attempting to expel the Nazi army from the country. Warsaw really wastes no time throwing you into its Darkest Dungeon-inspired combat system. So is Warsaw a game worth purchasing, or is it one you should resist buying at all costs? Let’s find out. 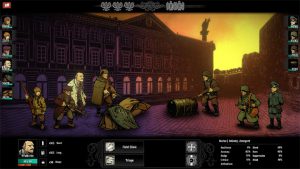 Delightfully bright and cartoony, Warsaw doesn’t spend a lot of time on narrative- in fact, the largest bulk of the game is devoid of any real context to the fighting, with you going back to your base and selecting missions from a menu based on numbers. It’s clear that story was not a major focus of the game, and outside of its use of setting, doesn’t try to evoke much feeling from the player. To actually learn about the Warsaw Uprising, you’d need to go to Wikipedia, read a book, or already be knowledgeable about WWII events, as not much information is divulged in game.

Warsaw throws you into a tutorial mission that gives you a brief overview of how combat functions (without a lot of context, but any information is appreciated), and teaches you how to move around the world map. While in missions, you control what is essentially a coin and move it around the map, moving between buildings while either avoiding or entering into combat encounters with Nazi soldiers. Most objectives on the map are actually obscured from the player until you get close, so Nazi sentries with large vision ranges can see you and initiate combat with you before you could ever hope to see them.

While in the map mode, your movement is actually quite limited and if your movement runs out the mission is failed and you return to base, so every move you make must be done with purpose. Your overarching goal is to stretch out your war assets so that you survive until the 63rd day of the uprising, so repeatedly failing missions for whatever reason can make it so that you have to restart the game. 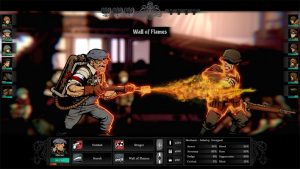 As far as combat encounters go, in Warsaw you can place your characters in four spaces along two rails (for a total of 8 spaces). The attacks your characters can choose from depends entirely on where they are positioned vs where the enemies are positioned- for example, a character can have a sniping attack they can only use while in the back spaces of your formation, and can only be used to hit targets in the back four spaces of the enemy formation. If this sounds a lot like Darkest Dungeon, that’s because it is: Warsaw’s combat is almost completely inspired by the aforementioned game, the developer just added an additional four spaces to the combat mix and gave a “Flanking” damage bonus to attacks that hit the opposite rail on an opposing side. Characters will fire their weapons, inflicting buffs and debuffs at a constant rate in order to achieve victory. 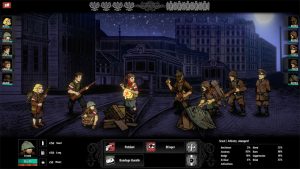 Warsaw also differs from Darkest Dungeon in one major respect- rather than characters taking their turns in speed order, Warsaw gives both sides in combat a number of activation points based off the number of active participants. So if you have four soldiers and the enemy force has six, you have four points per turn, the enemy has six points. Each character also has their own action points, denoted by yellow bars under their character portrait- so you can select the same character multiple times in one turn, but characters used this way will suffer from accuracy penalties, among other things, and can’t even act if their AP is 0. A core component of the game is to reduce the number of enemy activation points as soon as possible and by any means necessary. If you have the choice between killing an enemy and healing a character of yours who isn’t as critical health, choose the option of killing the enemy as that will be fewer actions of them hurting your force next turn. 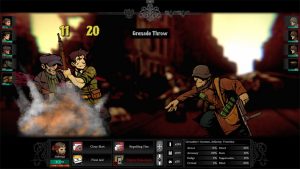 As far as creating your base of characters, unlike Darkest Dungeon, there are no character classes that you have control over when forming your party. Unique player characters will join your squad as you progress through the 63 days of the uprising, and while you can (and should) recruit generic characters, those characters can’t rank up and learn more skills than what they initially come with, and tend to have a lower than average health pool, as well. Unique characters, like the nurse Jadwiga you start the game with, can learn new skills from a randomized pool. The same skills may not necessarily be present in every single play through of the game, which reduces player agency when it comes to forming your core group as even the skills you have access to mid to late game will be subject to random number generation (RNG). 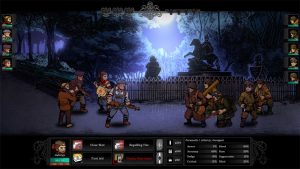 So with how combat functions out of the way, let’s talk about the hideout and the options you have. While in the hideout, you can select your characters to promote them, which unlocks new skills (the skills can be subject to RNG, and you may not get the exact skills you want every play through of the game). You can leave some of your characters to heal with the medic, as you can become injured while in missions and each one reduces your health- one injury equals a one day stay in medical, so missions that take two to three days will often be enough to heal your characters back to fighting shape. This is one of the reasons why using generic characters early can be useful, as you can place them in and out of rotation depending on the health of your other characters. 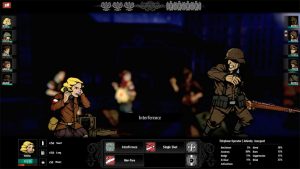 Beyond that, you can spend your valuable supplies to acquire new goods like ammo, flares, and more, repair and utilize different weapons, and then finally select missions from a board. Due to being the resistance force, you have a Momentum value you need to upkeep, as each district in the area yields a specific number of war assets that you need to keep playing- if your Momentum hits 0, that’s it, the resistance has been crushed. District morale affects the war assets you yield each day, and you often will find yourself provided a selection of missions from a list of three or four. There is a catch, however, that districts whose missions you do not take will suffer a morale loss, so you will have to carefully balance what missions you do and for which districts. 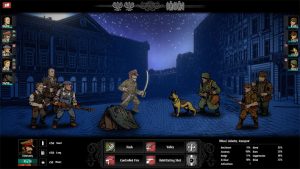 To compound the above issue, running out of movement while in the map mode of a mission fails it as well, and forces a morale loss for every single district. The same holds true for getting wiped out in combat. If you have to escape a combat encounter- you also fail the mission; however, failing the mission is preferable to failing the mission and losing your resistance fighters. In the beginning of the game, finding where you need to go before your movement runs out and you fail the mission is harder than in late game, as you get more freedom in movement as the game goes on. Conversely, however, once you reach late game, combat encounters become omni-present and getting ambushed by them is much less ideal due to the sheer volume of enemies you have to chew through, the usage of flares to reveal enemy locations nearby becomes more important as you progress. Using compass items can reduce your movement loss, which is valuable at basically any stage of the game, and it’s important that players use these consumable items fairly often as they make the game much easier, overall. 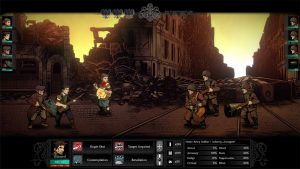 While Warsaw does provide a tutorial, a lot of information is kept hidden from the player. Missions never have a difficulty rating revealed to the player, so you have to imagine that a mission which states, “Eliminate three artillery squads” is likely going to be more difficult than, “Locate five supply caches.” To add on top of this, Excursion events can pop up every so often which will let you spend supplies you’ve gathered to boost morale, which can be an invaluable bump to surviving until day 63 of the uprising. 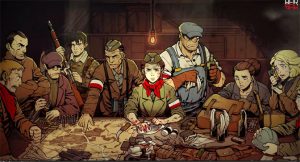 Overall, there’s not really anything wrong with Warsaw. It’s a fine game. It draws parallels to Darkest Dungeon relatively constantly due to having extremely similar combat, and for good reason- Warsaw has a lot of the core components that made up Darkest Dungeon, but without a lot of the depth. There are fewer ways to craft your party before being subjected to RNG, which can make one run of Warsaw seem less fair or fun overall. It gets enough right and the challenge is high, so if you’re a fan of Darkest Dungeon and want a similar game, Warsaw would be a fine choice. If you thought Darkest Dungeon was too difficult, Warsaw actually gives it a run for its money, for the most part, and those who don’t like roguelites or turn-based combat will find little to enjoy here.