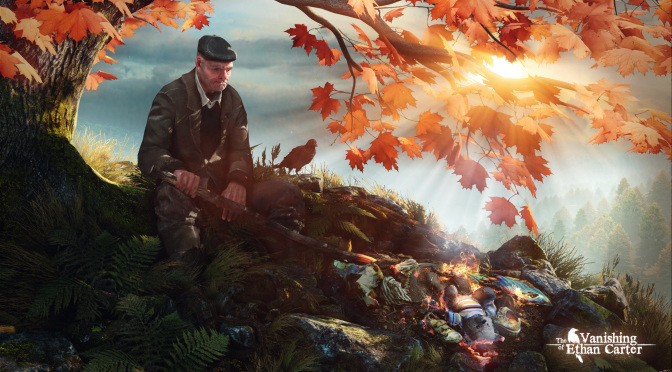 The Vanishing of Ethan Carter

The Vanishing of Ethan Carter is described on the developer’s website, as a weird fiction horror game. I’d call it American gothic, because it’s got more than a hint of Lovecraft, with a liberal sprinkling of Poe, without becoming a period piece. The floorboards all creak and the trees whisper and everyone seems more than a little crazy, in Red Creek, a forgotten corner of rural America.

Horror fans may feel a little bit cheated by The Vanishing, if they’re looking for gore and jumps. This is a game that swaddles you in an air of unease, rather than abject terror. This is no survival horror. Don’t expect to be swinging an axe or reloading a shotgun or running. This is a game that’s not afraid to be quiet and slow and it’s also not afraid to let you figure things out for yourself.

The game begins with you walking out of a tunnel and into a forest. A message flashes up across the screen, “This game is a narrative experience that will not hold your hand.” And with that, you are left to your own devices. This sounds like a recipe for frustration, but I stumbled upon the game mechanics fairly quickly, although, I did walk pass the first puzzle, simply because I didn’t realise there was one.

You play the part of Paul Prospero, a detective with paranormal powers. Propspero  (a reference to the magic-wielder of Shakespeare’s The Tempest, no doubt) comes to Red Creek, after receiving a letter from Ethan, asking for help. When he arrives, the town appears to be deserted and Ethan is missing. And it’s here that this first-person mystery begins.

The Vanishing is a stripped back game. There are no floating hands, as you’d expect from the first-person perspective. There is no inventory and no map or diary or save point, no health bar and, notably, no tutorial.  The game relies on atmosphere and narrative to draw you in along that rusty, abandoned railroad track. Add a subtle, haunting soundtrack and you’re on to a winner.

The first thing that strikes you about The Vanishing of Ethan Carter, is that it’s beautiful. It’s got to be the best looking game of the year. The graphics are crisp and detailed without being a cold, soulless pixel-pushing exercise. The soft, autumnal colours in the trees, the rusting metal, flaking paint and dilapidated houses all reflect an industrial town fallen on hard times. And this sense of decay and neglect pervades everything in Red Creek, giving it the sense of unease that keeps you inching forward.

Even with my graphics notched right down, to prevent my netbook from melting, I still gasped at the tinge of a sunset, falling on a lake, towards the end of the game. A symbolic sunset, I assumed. Whilst Red Creek itself is falling apart at the seams, it’s nestled in the most beautiful American landscape of mountains, forests and lakes, all adding to the feeling of isolation.

Developers, The Astronauts, have succeeded in creating a believable geography for Red Creek. The game world isn’t as big as you first think. There are hidden pathways through the forest, which loop back on themselves, giving the illusion of a place you could get lost in. And as the story unravels, you are lead to new parts of the town, you’d glimpsed earlier on. Clever use of the town’s mines also expand the map.

The gameplay comprises the gathering of clues and solving puzzles,

but they are put together in an intriguing way. Prospero comes across a patch of blood and some severed ropes – sign of a struggle? Then you find disembodied legs further down the track and a trail of blood leading to the torso – did they crawl? Were they dragged? These questions float across the screen.

You need to find all the clues in a scene and then use Prospero’s psychic abilities to piece them together. By putting the elements in the right order, a ghostly replay of the scene is revealed. The clues are clever enough to play with your assumptions, ensuring the scenes aren’t as straight forward as the clues suggest.

The Vanishing’s hands-off approach is bound to endear some players and frustrate others. It’s easy to miss things. I was lucky and managed to solve the second puzzle almost straight away, having missed the first set of clues. Towards the end of  the game, you are given a fast travel mechanic to go back and complete missions you’ve overlooked. I only had two early ones to finish, but it would be easy to miss more.

The game also uses an autosave function, which can leave you with no way to save for quite long stretches. I played the first mission through two or three times, not realising it still hadn’t saved. This is annoying, if you’re playing in short bursts. There seems to be no reason why the team couldn’t have added a manual save, because the game has no win or lose dynamic or boss levels. The only thing I can think is, that The Astronauts wanted to strip away traditional game elements that take you out of the story.

At only around four hours long, The Vanishing of Ethan Carter is a short story of a game and sticks to those principles with its ambiguous ending. It combines clever use of music and sound, stunning aesthetics and an intriguing story to keep you moving through the world. This is one of those games, where it’s not about winning, it’s the taking part that counts.