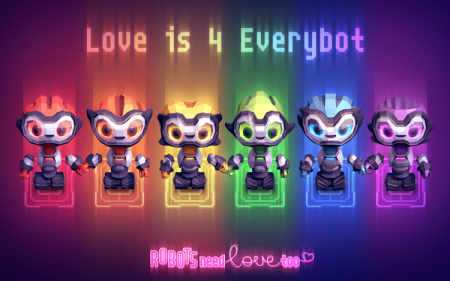 Robots Need Love Too is an iOs puzzle game about two lovestruck robots from Elephant Mouse.

In the beginning of Robots Need Love Too, you can choose names, gender, and preferred pronoun for your romantic robots. In addition to the obvious he and she choices, your robots could use the genderqueer pronouns they, zie, ey, or xie, and naturally any two robots can fall in love. Robot gender and pronouns are entirely cosmetic features for this puzzle game, but character customization is always about allowing players to recognize ourselves in the game and connect more with our protagonist. The ability to select preferred pronoun and the gender creates an inclusive space for all gamers and a refreshing spin on the ol’ rescue-the-princess narrative as well.

It’s amazing how inclusive just a few text options can be. Oh, and the UI doesn’t start on any particular gender, either, which helps question heteronormative defaults.

I chose Pyramus and Thisbe, because I’ve received a classical education. (And when connecting with characters, I like doomed relationships and literary references. What?) I was not disappointed in any of the resulting text narrative.

One every level, the lovestruck robots need to reach each other. Players arrange arrows to bring the ‘bots to their goal, collecting up to 3 hearts along the way. As the game progresses, there are obstacles, gaping holes in the floor, immobile arrows, magnets to drag robots across the room, and other challenges to the robots’ union. The course of true love never did run smooth.

Robots can only go where they’re programmed, so I wondered if my robots would walk an endless loop or if they’d step off into a hole. They would! And my ridiculous experimentation was rewarded with achievements! It’s like the Elephant Mouse team was rewarding my bad choices!

Each puzzle level is made up of two parts, Pyramus’ path and Thisbe’s path, and sometimes one side was much more difficult than the other. It also took me a couple levels to really figure out how to work the magnets. A couple rough patches didn’t turn me off the game, because the game is just so cute, and because each level had a sweet little flavortext about the robots’ relationship.

Elephant Mouse’s previous games include Star Trek: Rivals and Lil’ Birds (as Villain Games). Also, I’ve socialized with more than one employee of Elephant Mouse, and I worked with some of the RNLT team on Star Trek: Rivals. None of them have offered me sexual favors, illicit drugs, piles of cash, or whatever massive bribes games bloggers are supposedly receiving, which I think was a gross oversight on their part, don’t you?

Robots Need Love Too is available free on the App Store.