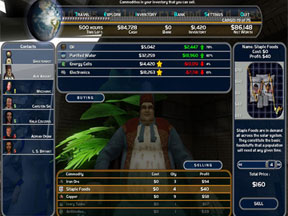 The idea of flying your own ship through space and engaging in both lucrative and shady deals to turn huge profits has been a staple of computer gaming on the PC almost as long as people have been playing games. I spent many a night in the days before the Internet planning my next moves with Trade Wars, logging into my local BBS to crush the competition.

And once computers started to be able to display some type of graphics other than text, we also started to see shooters, which have been more successful than any other genre really.

The reason I mention both of these types of games is that Space Trader is both, which is a little surprising. Its kind of like mixing chocolate and peanut butter together for the first time I’d imagine. It sounds a little strange, but once you try it you will find out that they mix really well.

In Space Trader, the trading simulation is really the core of the game, while the shooter missions are mostly side quests. This is not always the case, but for the most part you are a trader who can shoot, and not a shooter who trades. Given that the trading aspect of the game is much stronger than the first person shooter side, this is a good thing.

You start off as a poor space trader without a ship or any goods. Thankfully, you apparently have the skills and just need a benefactor. Unfortunately, none of the reputable fleet owners will give you time of day, so you turn to the shady side. This opening tutorial will show you how the universe of the game operates. You basically have reputable vendors who sell things like silver ore and clothing. They won’t touch anything illegal. Then you have the criminal merchants who sell things like illegal drugs, weapons and harvested organs. They won’t touch legal goods, I guess because they are too mundane for their clientele. Your first mission will be to pay back the crime lord that lent you a ship, and you will need to shuttle back and forth between the moon and Earth making trades until you have the 1.5 million in hand to give her.

When you get to a new destination, you can see what goods are trading at. You can even get news that might hint at where prices are higher. Even the merchants themselves will give you clues. You might see that cotton has recently dropped over 30 percent in value on Earth, so you can pick it up for a steal for transport to the moon, where the great cotton depression probably hasn’t hit yet. Given that you are working with tons of goods, if you are even mildly intelligent about finances, you should quickly build up your fortune. You can even upgrade your ship with more cargo holds, which means more goods can be carried on each trip. This is an investment you should make as soon as you can afford to do it.

When you arrive at a new planet you will instantly be shown if the goods in your ship made money, though you still have to visit a merchant and actually sell them. Sometimes the game is a little off in this initial assessment. You often obtain goods for free and if they don’t sell for too much the game figures you have made a bad trade, ignoring the millions of dollars you are about to gain on purchased items in other holds. Thankfully this is just a guideline and doesn’t affect gameplay at all. Like I said, you still need to actually sell the goods whatever the estimate.

Although trading is done in a trade window like most games of this type, you actually walk around space stations and trading towns in first person. While in first person mode you can talk with bartenders and other people just walking around. Some of them will have information that might be profitable, and some will have missions. A few of the missions are a little silly, like collecting goods lying around the space station (this is where you can find a lot of the aforementioned free goods). But some are rather deadly serious.

Here is where the first person shooter interface comes into play. You might hear of a pirate who raids ships that is making their lair in an abandoned subway terminal. If you want to pick up some extra cash, you can choose to raid that lair. Also bad people will hire you to kill their competition and sometimes you can capture outlaws for a reward. If you accept any of these missions, time pauses in terms of the trading interface and you go into the shooter interface.

Taking the shooter missions has several advantages beyond the reward the mission offers. There are lots of goods lying around most lairs, which is like free money. You can also get real free money directly from fallen enemies. And not every mission needs to end violently. Sometimes you are able to use diplomacy or intimidation to avoid a firefight, a pretty clever innovation I wasn’t expecting.

The biggest disappointment with the shooter interface is the graphics. They are really behind the curve in terms of their look. I thought I might be playing an old Blake Stone game there for a minute. By contrast, the planetary graphics when you are sailing between worlds is very well done. The fields of play for shooter missions are also a little limited. It seems that a lot of pirates like to hang out in train stations. The mechanics of the shooter interface are okay at least, with power-ups and a variety of weapons to match your shooting style. And most of the shooter missions are optional, so you can ignore them if you choose. They do add some spice to the game if you like that type of thing, but the emphasis is solidly on trading.

In fact, the universe here is pretty large. There are over 100 people to trade with, and they all have voices – even if it’s only a little friendly greeting when you meet them. The market has about 40 possible goods, which makes it both challenging and rewarding to find a great combination of planets where you can buy low and sell high, at least until the market adjusts.

It’s worth noting here too that the game is a great value, and would make a perfect holiday gift. You can download the game for $9.99, which is a great deal. Given that the markets are dynamic, the replay value is pretty endless, and you can’t say that about many games, especially a $10 one. Given the downturn in our own economy, those looking for a great value should seriously consider Space Trader to get some real bang for their buck. So even though the Space Trader universe is brimming with great deals, the best one might be to buy the game itself. If you’re fond of trading and shooting, you won’t be disappointed.