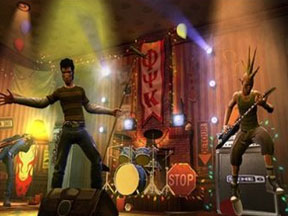 Last year, at least our eyes, Rock Band won the Battle of the Bands. Don’t get us wrong, we were huge fans of Guitar Hero III, and were very impressed with Neversoft’s first attempt at the franchise. It was just that Harmonix’s newest venture went above and beyond anything that a game centering on just one instrument could do.

It was time for Activision and Neversoft to move to the next level.

With Guitar Hero: World Tour, Activision did move on by providing a move to a full band experience, adding a microphone and drum set to the already proven guitar gameplay. Some people might consider this an act of desperation, or being a copycat, but when you think of it, they had no choice. If Activision kept with just the original Guitar Hero formula, they would not be able to stand up to the Rock Band juggernaut. In what could be considered a freshman outing, they succeeded, but there is still room for improvement.

This is Todd Hargosh, and I will center mostly on both the guitar and drum controllers. Later I will let my GamerGeeks co-host Kelly give her take on the vocals and music creator (a feature not found in Rock Band 2.)

For those who are familiar with past Guitar Hero games, they will feel quite at home, even with the new guitar controller. I have to say, despite my loyalty with the Rock Band Fender Stratocaster, I am very pleased with the new GH axe. No longer the toy sized controller we are used to, the new axe is about the same size as its Rock Band competition, but feels much heavier and more durably built. While it still has the five elevated fret buttons (I still am more partial to the recessed RB fret,) they are accompanied by a new touch bar located further below the neck.

The new bar has two main functions. It can be slid up and down by your finger during sustained notes to create a wah-wah effect, and it can be used during special segments (notes are connected by a purple line) as a method of tap strumming. Personally I found this mode to be a little too difficult and went back to the fret buttons. However during the sustained notes I felt quite at home sliding my finger up and down the bar, almost as much as I’ve been used to using the whammy bar. Star Power can be activated as usual by tilting the guitar upwards, but now the select button has been replaced with a long bar behind the strummer. It’s easy to hit this with your palm and trigger Star Power rather than hunt for the Select button. Even better, after a game is paused, there is a countdown before the song resumes. All I have to say is thank you Neversoft for thinking of this idea. Now I don’t have to worry about missing any notes after pausing a game.

The drums, I have to say, are quite impressive. That is, when they work. Consisting of three main pads, two cymbals, and one bass pedal, they feel more like a real drum set compared to Harmonix’s. However, as I said, it depends on whether or not they work. Early releases had issues with unresponsive cymbals (or too sensitive.) Eventually Neversoft released a tuning kit that can be connected to your drum set via a mini-USB cable which can be ordered at no charge. I had a problem with my orange cymbal not being sensitive enough, but the tuning kit was able to fix it. However, some people, like our own Kelly, had more serious matters with the bass pedal not responding at all, and had to have the entire drum kit replaced. Hopefully future shipments will fix this issue because the drums are quite impressive for those who aren’t willing to spend $300 on an Ion Drum Rocker.

As far as the lyrics go, I will let Kelly take over here:

I would give anything to hear Todd belt out a song on World Tour (not gonna happen-Todd,) but I thought I would be a good friend and help him out on two parts with the game, vocals and music studio. The vocals are a bit different than Rock Band, some things good and some bad. Let me start with the good: the addition of the free style section for additional points are great. You can really get your blues style do wop on giving the song a bit of personal flair. Star power, when available, is much easier to activate with a press of the button. The final good point I will make is thank you for the variety in music choices, even though I’m still scratching my head over "Beat it" by Michael Jackson.

I’m a person that sings on hard or expert on a majority of songs in RB, but I’m stuck on medium with World Tour. My rule of thumb is, if I cannot hit 100% on medium then I should not bump up to hard. I’m unable to peg if it is a problem with the recognition software or the scoring. When a song is on both games and I score 100% flawless on expert on one and get a 90% or lower on medium on the other, it indicates to me a problem somewhere.

The other feature is the music creation studio, which I am quickly getting sucked into. I can totally lose track of time while checking out all the choices and options. There is nothing like laying down a custom track of your own. You will need time to really get the feel for this, which reminds me a lot of Apple’s Garageband. Players should go into this with an open mind and willingness to learn cause if you have no musical background it can be a bit overwhelming.

I have a history of church and school choir in addition to band, and my husband however was a die hard baseball player. It was an interesting evening of explain to my husband FACE and EGBDF (every good boy does fine), tempo, pitch, and BPM among other things. He like many others will quickly find that starting with machine beats for drums or keyboards, among others, is a good starting point to create their first song.

Getting a base beat can help other things click into place. I think that this feature could be the starting point to spark musical minds up all over and to see a re-birth of the music departments in schools as well as more adults getting evolved in music creation and finding the talent buried deep within themselves.

Thanks Kelly. Ok, this is Todd back with ya. I do agree with Kelly about the variety of music in the game. While it still has a long way to go to counter Rock Band (and its proposed total 500 songs via RB1, RB2, AC/DC Live, and DLC,) the 86 songs available out of the box are a huge start. Considering that first and foremost, they are all master recordings, a first for the series. Heck they even go as far as saying "no covers" on the packaging. If only all music games could be able to say that. (Yes, I’m looking at YOU, Rock Revolution!)

And yes, some of the song choices are a little strange (Beat It definitely comes to mind,) some are carryovers from Rock Band, and I do have my hatred of Hotel California (worst"song"ever, but Kelly wants me to add that she does not agree with me,) but still this is a huge improvement over past Guitar Hero titles, if just for the all master factor. Even if the songs are "live" recordings (such as Purple Haze, Sweet Home Alabama, and On the Road Again,) they still sound great, far better than what any cover can ever be.

The other question will be how Activision can keep up on downloadable content. From what I’ve seen so far they are lagging behind Harmonix and their "at least three songs a week" policy. This really needs to pick up in order to increase replay value, even though the music creator and GHTunes to download created songs does help out a bit.

The Career mode, I have to admit, is a little disappointing. I was hoping to have something in depth similar to Rock Band, but when you look at it in detail, it’s still the same tier-based system that the past GH titles used, only this time, each session (or gig) consists of up to six songs and most end with an encore. Duels are back, but this time, instead of beating your foe until he loses his rock meter, the objective is just to survive, and for those like me who had trouble beating Slash on Hard, this is a welcome change. Of course there are the original duels available for those who want to play them again.

In addition, this is also the first Guitar Hero game to allow you to create your own rocker, and from what I’ve seen the creation tool is quite deep. Not only can you customize your character’s look and what he or she wears, but also their body dimensions right down to the size of their jaw, and can even customize your instrument. I guess we can thank Gibson and their "lawsuit" for this, because now we are not stuck with pre-made guitars anymore. It’s quite impressive and getting the right look will take a lot of time but in the end it’s well worth it. Of course, the classic Guitar Hero characters (Axel Steel, Judy Nails, Johnny Napalm, etc.) are back, but thankfully, Frankenshaggy (the creepy lead singer from Guitar Hero III) is nowhere to be found.

In addition, recreations of many well known musicians are present, including Jimi Hendrix, Sting, Ted Nugent, Zakk Wylde, Billy Corgan, Travis Barker (pre-plane crash,) Hayley Williams, and Ozzy Osbourne. The likenesses of each of them are amazingly realistic, especially that of Ozzy. Neversoft got him, and all of his mannerisms, dead on. If only it had his trademark mumbling and yelling out of "SHARRRRON!!!" then it would be perfect. Needless to say, Guitar Hero World Tour is an amazing looking game, far surpassing III and it’s creepy, bloated yet angular, characters.

If I have any major complaints about the game, aside from the previously mentioned limitations in Career mode, it would be that the overall band experience doesn’t seem to gel as well as it does in Rock Band. But as I said it’s a strong first attempt by Neversoft to do a full band experience. Rock Band 2 might win the battle this year, but Guitar Hero World Tour is still a very strong title. Consisting of an "all master" track list, gorgeous visuals, and new impressive (when working) instruments, World Tour is definitely worth the purchase for any music game fan.

CONS: When they actually WORK! USB tuning kit helps but there are some rare issues. Band gameplay does not blend as well as Rock Band. Tier-based career mode seems a bit limited. HOTEL CALIFORNIA! (Even though Kelly does not agree with me.)

UPDATE: As of this writing, Kelly still has her drum RMA listed as "in process." We’ll have to see how that goes come time of publication.