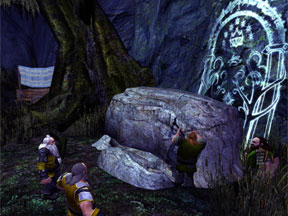 Lord of the Rings Online:
Mines of Moria

So I have been playing Lord of the Rings online for about a year now, and even though I love the world, based on the books of J.R.R. Tolkien and to some extent the movies too (though technically its only supposed to be based on the books), I was starting to get a little bit bored. Having maxed out my level at 50 and maxed out my arms making crafting at Grandmaster, there was not a lot for me to do other than try to put together some new outfits.

But now developer Turbine has done the impossible. They have unlocked the gates to a place whispered in low tones by Dungeon and Dragons geeks and computer game players in great reverence. Moria. The great mine of the dwarfs. They dug too deep in their greed and unleashed the Balrog, and it destroyed them. In a tutorial type instance, you actually get to play a character that had a central role in that tragedy, so you can experience it first hand. In fact, there is an entire new mini-zone and tutorial that you go though before you even get into the mines, which I actually really loved. It is kind of reminded me of the Isle of Refuge instance from EverQuest II, only this one was designed for high level characters before they were given access to the mine.

The new mine of Moria is one of the largest continuous underground areas ever created for an MMO, which is appropriate given that the very name conjurers up images of endless mazes and caverns. After all, the fellowship was lost in there for many days, and Gandalf sort of knew the way. This is obviously the centerpiece of the new expansion pack, and I will write in detail about it. But there are other things that were added to the game as well, and they are noteworthy.

First, the level cap rose from 50 to 60. This is a pretty standard thing that MMOs do once their player base gets so high that further adventuring tends to get a little boring, especially after you have leveled a bunch of new characters. The key is to provide new content so the high level characters will be challenged. And Moria does that in spades.

They also introduced two new character classes. Both classes are unique and offer some new gameplay that previous characters don’t have access to. They are probably best for advanced characters.

The first character type is The Warden, which is a bit of a cross between a Guardian Tank and a Hunter DPS character. You only get medium armor, but have a nice ranged attack and some good damaging skills. It’s really the perfect solo character who is able to absorb some hits and dish them out too. Also, you can perform special moves by hitting a combination of attack buttons, which do special things. Some of these combinations do extra damage and some heal you. But you have to memorize the moves since they are not spelled out on your hotkeys for you, which makes it a little more challenging to play.

The coolest new class however is the Rune-keeper, but also one of the hardest to play. They are a mix of a Hunter DPS type and a Minstrel healer type. They are incredibly powerful, but tend to become affiliated with the type of role they are performing. So if you are doing a lot of damage, your damage skills will increase while your healing skill effectiveness decreases. And of course the reverse is also true. This generally means that the Rune-keeper is probably going to be a welcome guest in any fellowship since they can perform either a damage or healing role. But, the player needs to be disciplined because if they join up as a healer and then weaken their healing magic by constantly fighting the enemy, then they will have failed at their assigned role. This makes the Rune-keeper a great class for those who like to be able to tackle any situation, but who can plan ahead to maximize their effectiveness. They aren’t a great solo class, but again, should find many invites into fellowships.

Another major component that was added was legendary weapons, which start off rather weak for their level but gain experience as they are used in combat. Really you only need to have them slotted in one of your six legendary item slots for them to absorb experience. Items in those slots share item XP, so if you have all six filled then you will be getting one sixth the amount for each one. And you can disable them from absorbing XP too, so that one item can get the full amount and level more quickly. According to the text when you get your first weapon, they should get XP when you fight monsters and perform quests, but they only seem to level when fighting monsters, not when you get quest XP. Perhaps I read it wrong, but many others have said the same thing, so perhaps a little more clarity in the tutorial instance might be helpful.

I have mixed feelings on the legendary items for a personal reason, though it will also affect other characters. I love how you can slot gems in those new items so that they can take on different powers, and how they enhance your character in unique ways, like buffing your favorite skills. I don’t even mind the randomness of it, which makes it kind of fun to try and find an item that matches your play style. And you can always unmake weapons you don’t want at special forges, which gives you gems that can be slotted into items that you need to keep.

My biggest complaint with this is the effect it has had on the arms makers. I spent a ton of time getting up to Grandmaster of the arms maker tier, and now my best wares are pretty useless, or at least unwanted by the player population. Why buy a player made weapon that can’t level up when legendary ones drop like candy in the new lands? A recent 30 minute farming trip killing monsters I knew could drop legendary weapons netted me seven legendary items. Granted I couldn’t use them all because they are class specific, but I got two that I could use and the rest were sold on the auction hall or deconstructed for parts. There is really no reason to buy inferior player crafted weapons it seems, and I’ve got an empty wallet to prove it.

In one stroke, Turbine has wiped out an entire crafting profession, at least in terms of profit potential. Whereas top tier armor still sells for one or two gold pieces, top tier weapons either go for 100 silver or don’t sell at all. You might be better off making all your best weapons vendor trash. I don’t think this is fair at all to folks who spent months (and given the system I do mean months) crafting up to the highest levels of that profession. I am not sure if Turbine knew what they were doing, but there are a lot of disgruntled weapons vendors out there right now threatening to move on to other games where they are not so persecuted. One guy I talked with in the arms makers guild hall said he was ditching his character and moving back to Warhammer Online that very night.

Now, this arms master situation only affects a small number of players, and it is supposedly balanced. Turbine will tell you that because legendary weapons only slot to the main hand, that players still will need to buy crafted weapons for their off hand. The problem is that not everyone uses two weapons or even can, like the guardian class for instance. Also, once you become a supreme master (the new crafting tier) you can make Level 60 legendary weapons which are supposed to be better than anything in the game. But as there are not many capped level 60 players right now, this market is thin at the moment. We will see if that changes.

The one great thing about the legendary weapon system is that once players reach the level 60 cap, they can keep playing to get their weapons experience. So the new cap is kind of a soft one, as weapons keep gaining even if the player does not. Kind of a clever way to keep people from getting bored when they hit the new cap, don’t you think?

But the biggest feature of the expansion pack is of course Moria itself. There are also two new outdoor zones, though these don’t seem to have anything too special in them. They are fine and filled with quests, but nothing we have not seen before.

To get access to Moria you need to do a fairly extensive tutorial set of quests. This not only shows you how to use legendary weapons, but also tells you the history of the mine and lets you play a real role in getting it back open again and ready for business after the fellowship has gone through.

When you first get there, you will see the great stair. Thankfully the dwarves have been busy cleaning the place up, so the hundreds of skeletons that adorned it are gone. The dwarves are busy reclaiming new areas, so you will find towns from time to time inside the mine. But the mine is by no means a safe place. There is a huge population of goblins down there making trouble, as well as some high level unfriendly animals and even some creature types never before seen in the game. And the treasure drops are great. I even got a beryl shard off a non-boss, non-named monster, something I have been asking for since shards started selling for 800 silver a piece. It’s random, so no more farming an item that all high level crafters need.

My guild and I roamed throughout Moria for hours, taking on the myriad of quests offered in the dark depths. They were all pretty clever and challenging, and a few were even kind of funny, though we often strayed away from them to just look around the place. Moria is huge and you will feel its depth. You can’t use your horse inside the mine, but if you get high enough reputation in the miner’s guild you can buy a goat creature that does work down there as a mount.

The layout of the mine is impressive, with huge open areas and twisty narrow corridors all meshed together. There are bridges over bottomless chasms, narrow twisty passages, interesting architecture and small cracks that lead to hidden fortresses or lairs. It’s actually easy to get lost down there. But roam all you want, because you won’t have to load new areas. It’s one huge continuous zone. Turbine says it’s the largest underground zone ever created for an MMO, but I think it might even be one of the biggest areas period, unless you count games where the entire thing is un-instanced.

There even seems to be some unique eco systems within the mine itself, which are separate from one another. It would be an impossible task almost to take this dungeon of legend and give it physical form, but they have done it. If you remove everything else the new expansion pack does, it’s still worth the price of admission based on this alone. My guess is that players will be happily delving into Middle Earth for years to come. Just now, we can go a little bit deeper.