Turbine announced several key additions to its leadership team as part of its continued effort to design and deploy the next generation of online gaming. ‘We are very excited to add such a stellar group of proven industry veterans to our world-class team here in Boston,’ said Alessandro Galvagni, General Manager, Turbine. ‘Ken, Alan, Jai and Demetrius are proven leaders that strengthen our team and position us well as we work to continue operations of our award-winning titles and bring new innovative experiences to market.’ The new members of the Turbine team include: Ken Rolston, Director of Design ‘ Ken … END_OF_DOCUMENT_TOKEN_TO_BE_REPLACED

Warner Bros. Interactive Entertainment and Turbine announced today the launch of The Lord of the Rings Online: Riders of Rohan, the next expansion to the award-winning free-to-play massively multiplayer online roleplaying game (MMORPG). Players across North America and Europe can purchase and play Riders of Rohan for PC starting today by visiting http://rohan.lotro.com/. ‘We are really excited to launch Riders of Rohan, our fourth major expansion to the game,’ said Kate Paiz, Executive Producer of The Lord of the Rings Online. ‘This is our biggest expansion yet and we’re very excited about the introduction of the industry’s best mounted combat … END_OF_DOCUMENT_TOKEN_TO_BE_REPLACED

Turbine has announced an update regarding Riders of Rohan, the upcoming expansion for The Lord of the Rings Online. The following is from LOTRO Executive Producer Kate Paiz: ‘We’ve had a very successful Beta program with some of the largest and most active beta player populations we’ve seen since Moria. The amount and quality of feedback on our largest expansion ever has been fantastic,’ said Kate Paiz, Executive Producer of The Lord of the Rings Online. ‘Thanks to some great efforts from beta players, we’ve identified issues that we think need to be addressed before we can launch. In order … END_OF_DOCUMENT_TOKEN_TO_BE_REPLACED

Turbine has released a new behind-the-scenes sizzle trailer for Riders of Rohan, the 4th major expansion for the award-winning The Lord of the Rings Online, which is now available for pre-order and will launch on September 5th. Publishers: Turbine Entertainment Platforms: Mac, PC

Warner Bros. Interactive Entertainment and Turbine announced today The Lord of the Rings Online: Riders of Rohan, the next expansion to the award-winning free-to-play massively multiplayer online roleplaying game (MMORPG), will launch on September 5, 2012. Players can pre-purchase Riders of Rohan and gain special benefits starting today by visiting http://rohan.lotro.com. ‘Riders of Rohan is our biggest expansion yet, and raises the bar technically and artistically much like Mines of Moria did in 2008. We’re introducing the largest area we’ve ever built and a combat system unlike anything that has been built before in MMOs,’ said Kate Paiz, Executive Producer … END_OF_DOCUMENT_TOKEN_TO_BE_REPLACED

Today, Turbine has released a new Druid behind-the-scenes trailer for Menace of the Underdark, the upcoming and first-ever expansion for Dungeons & Dragons Online which will be available on June 25th and is available for pre-order now. The new video is part of a series that takes you behind the scenes to show how the expansion is being made. This video specifically focuses on the new Druid class and features members of the DDO team, including Executive Producer Fernando Paiz, along with in-game footage. Publishers: Turbine Entertainment Platforms: PC

Gaikai Inc., the innovative cloud gaming service, today announces an agreement with Warner Bros. Interactive Entertainment to begin the streaming of The Lord of The Rings Online and Dungeons & Dragons Online to players across North America directly from each game’s own website. For the first time ever, Gaikai is streaming massively multiplayer online games (MMOs) from the cloud, straight to players without the need for any download or installation. Gamers can try The Lord of the Rings Online now, with Dungeons & Dragons Online to follow soon, developed by Turbine, which is wholly owned by Warner Bros. Home Entertainment … END_OF_DOCUMENT_TOKEN_TO_BE_REPLACED 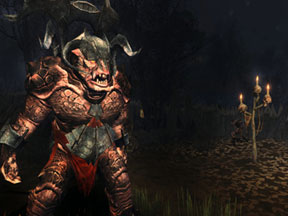 Lord of the Rings Online has been a favorite for a lot of players since its launch, and its nice to see developer Turbine not resting. The Siege of Mirkwood expansion pack adds a new area, and a totally new type of gameplay.