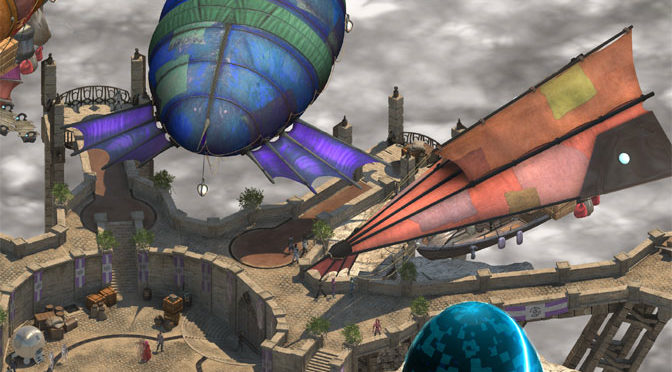 “I was a Soldier of Fortune, but am now just its plaything.”

This small piece of dialogue from the turn based role-playing game Torment: Tides of Numenera encapsulates what I love about it. It is both poetic and atmospheric. It is a true computer role-playing game (CRPG) that concentrates on story rather than just an endless supply of re-skinned targets.

Like in other turn-based systems, tactical decisions in combat, such as utilizing your companions’ strengths and planning their attacks, control the outcome, rather than reaction time or continuous button mashing. The order in which the character’s act depends on their speed stat. This very thematic game calls combat a “Crisis,” just like it calls your character’s personal interactions with the world “Tides.”

The game opens with your character, called the Last Castoff, waking up in some sort of fugue state, your answers to interactive questions drop you into one of three different classes: Glaive (warrior), Nano (wizard) or Jack (rogue). You are chased out of a dreamlike world by a being called The Sorrow. It must be said that in the original Kickstarter Campaign that funded its creation they called this antagonist the Angel of Entropy. This should give you an insight into the flavor of the game.

Your character falls to earth like a shooting star, inside a cloning capsule. This capsule is damaged and you must make your way from its wreckage, suffering amnesia about yourself and your world. You pick up companions that are even more complex than yourself, the angry Aligern, the witchy multi-time, multiple personality Calistege, the cagy Tybir and the young escaped slave girl Rhin. Each companion comes with his or her own well-drawn portraits and deep backstories.

[amazon text=Enter this strange and wonderful world with a copy of Torment: Tides of Numenera from Amazon!&asin=B01N2VISUC]

Now, your character, the Last Castoff, has another name, the Changing God and a past of previous incarnations. You even run across a cult that worships the idea of you far more than the actual you. It makes for interactions far more interesting than some classical character-as-deity that is common in other games and stories.

These interactions are colored by the game “Tides.” As mentioned before “Tides” can be seen like the personality of your character. Unlike Mass Effect where you can go between Paragon and Renegade, Torment lets your character and the story rise and fall on five various tides, Indigo, Gold, Silver, Blue or Red. If the game says there is a rise in the Indigo Tide you’ve done something diplomatic. If Gold is mentioned you’ve been altruistic. Those who put the needs of others above all will be attuned to this tide. Philosophic dialogue and actions seem to cause a rise in the Blue Tide. Silver is for glory-seekers and red is for those who live in the moment and are ruled by their passions.

The game’s plot reminds me of Robert Silverberg sci-fi novels, where the protagonist deals with philosophical effects of technology rather than just the physical ones. These stories are usually set in a far future world far beyond any present apocalypse and well into another cycle of civilization.

Ennie award winning creator of Torment, Monte Cook, has set Numenera in Earth one billion years ahead, “built on the bones of eight advanced civilizations” This is why it is called the, “Ninth World.”  Cook worked on much of the Dungeons and Dragons Planescape Campaign. The same campaign that gave birth to the computer role-playing game Planescape: Torment. Cook’s Kickstarter campaign to create the pen and paper Numenara RPG raised over $500,000; a testament to his reputation and initial presentation of his idea.

Following this business model, the company InExile also did a Kickstarter to fund the video game. It let them create a game with more dialogue, plot and art rather than a typical shoot ‘em up with a series of bigger and bigger boss battles followed by an epic battle with the major antagonist.

The graphics of the game are laid out in an aerial top-down, giving the player a clear view of the eccentric companions as they move through the mix of medieval and mechanical landscapes. Much of the games special quality is because of the artistic tableaus created by the game’s artists. At times, you feel like an actor on a beautifully elaborate stage, using dense dialogue and playing off other fantastic characters.

The measured pace of this game makes room for deeper thought rather than the frantic emotions a first-person shooter elicits. In that way, I think Torment: Tides of Numenera is greater than the sum of its parts. It doesn’t have the graphics of a Grand Theft Auto but its images are dreamy and artistic rather than hyper-realistic. Its audio is moody rather than modern and its gameplay recalls strategic pen and paper RPGs instead of the real-time combat in most modern games.

If you like games where you must think deeply and act consciously, buy Torment: Tides of Numenera. It is not your normal game, and is much better for it.