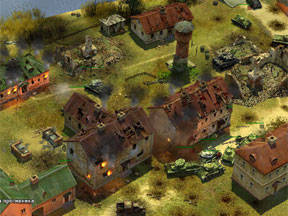 There are a lot of World War II strategy games out there. Following popular movies like Saving Private Ryan, the game industry has followed suit in recent years with plenty of WWII strategy titles and also a slate of shooters.

So Frontline Fields of Thunder is being dropped into a pretty crowded market. Thankfully, the game has quite a few hooks that should ensnare those who love the WWII genre, and strategy games in general.

Developed by Nival and N-game Studios, there is little wonder why the game looks and feels a lot like the Blitzkrieg series of titles. However, I have never been a big fan of those games, yet I find myself really enjoying Frontline. Why? The simple answer is game balance. Whereas the Blitzkrieg series seemed heavily slanted towards the computer AI, Frontline is much more balanced. In Blitzkrieg artillery was way too powerful, destroying your units whenever you tried to move anywhere, and never giving you any opportunity to respond in kind as it fired from its hidden positions.

That is not the case with Frontline. The addition of recon aircraft means never having to be destroyed by units hidden in the fog of war. The game does seem to be slightly shifted towards the defenders, but depending on which side of the line you are on, this can be either helpful or harmful. And any student of military history knows that with all else being equal, it’s easier to defend than to attack.

The game focuses exclusively on the war between Germany and Russia, which at least in the US has been a mostly overlooked genre. The fighting around Stalingrad and that which lead up to it was some of the most brutal of the war, and also affected the outcome to a great degree, and it’s nice to see a title that does not ignore this.

One of the coolest features of Frontline is the blending of turn-based strategic gameplay and realtime battles. Whichever side you play, Germans or Russian, you are given a strategic map that shows the current situation. There are several battles on the map that are being fought, or which are about to be fought. But you can’t just jump in and command any of them. You have to win a certain number of other battles before you are allowed the luxury of choosing your command. Basically, harder battles have higher requirements that must be met before you can choose them.

When you pick a battle, you are given a very quick briefing about what you are supposed to do. You are either supposed to capture a strategic point or defend an area. And you are given a lot of units to make this happen. However, the enemy also has a lot of units. The tank battles in this stage of the war were some of the biggest ever fought before or since, and the game reflects this by giving you a lot of units to work with. Unlike most games that require you to mine or otherwise collect resources, the realism of Frontline instead challenges you to make smart decisions with the units that you have on hand.

As you complete realtime battles, the giant strategic map will change, with the frontline sometimes swinging dramatically one way or the other and new opportunities for realtime battles opening up. It can move the way the battles did historically, or you can change the entire course of the war with some good generalship. Watching the pocket of trapped German troops shirk, or seeing them get relieved on the strategic map was a real joy for a player like myself who knows historically what really happened.

Frontline by the way is perfect for those who enjoy the historical side of WWII. Besides being set in a little-covered era of the war, the game is exceedingly accurate. Each and every unit is rendered perfectly to appear just as it did in real life. There is even an encyclopedia which tells the entire history of a vehicle or gun that is suitable reference material for a college-level paper.

Consider this entry for the German Brummbar Mobile Howitzer, a somewhat obscure vehicle which nonetheless gets a detailed description in the encyclopedia. "Brummbar Mobile Howitzer: An assault tank designed jointly by Alkett (the armored body) and Nibelungen (using the chassis of the Pz.Kpfw.IV Medium Tank) companies. The Brummbar’s main weapon was a 150mm howitzer installed in a stationary turret. This SPG (Brummbar is German for Grizzly) was supplied to special assault tank battalions including the 215, 216, 217, 218 and 219th. About 700 Brummbars were built between 1943 and 1945." I bet that is more that you ever knew about the Brummbar! Given that every unit in the game gets the same treatment, Frontline is probably one of the most accurate WWII strategic titles out there today, and certainly the only one covering the Russian Front in such detail.

Another feature of the game is its value price. At just $29.99, it’s worth it to pick up the title for the encyclopedia alone. Given that there is a fun and engaging war to fight as well, you can’t get much better than that in terms of value.

If you like big battles and plenty or realism, then Frontline is the game for you. You really have to approach playing the game a little differently than most titles and more like an actual general planning attacks. Even choosing where to fight on the strategic map should require a little thought if you want to turn the tide of battle in your favor. That, the encyclopedia, and the realistic units earns Frontline 4 GiN Gems.