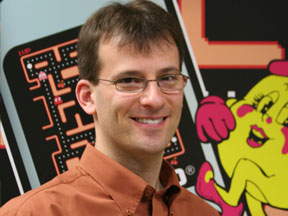 We all have played those lame games that come for free with a new cell phone. And we all have wanted more. Namco Networks, a spinoff company from Namco America, aims to give it to us.

Besides faithfully recreating classic arcade games like Pac-Man, Namco Networks is breaking boundaries by offering true multiplayer, just like you would find on your PC or networked console, to the mobile market. Playing pool or answering trivia questions against other real people might just make your next ride on the subway, wait at the airport or dull office meeting a little brighter. And considering the mobile phone is itself a communication device, this really makes sense.

We gave a call to Scott Rubin, vice president of sales and marketing for Namco Networks and asked him to give us the 411 on all these new game features, and let us know just how he wants to change the mobile market forever.

GiN: Most everyone has heard of Namco, but the Namco Networks division is relatively new. Can you tell us a bit about when it was founded and what Namco Networks specializes in?

Rubin: Namco was one of the first traditional video game publishers to enter the mobile games space, entering more than four years ago as a division of Namco America. Our growth and success during the last four years was recognized by our parent company; and to show the industry how much they believed in mobile as a gaming platform, they decided to spin us off as an independent company dedicated to mobile and network related games and content.

On January 1, 2006, Namco Bandai established Namco Networks America Inc., a mobile-focused subsidiary that recognizes the potential in the mobile games industry and is dedicated to continuing our success in the space.

GiN: In general, how difficult is it to deliver quality games to mobile phones? There must be issues with small screen size, poor quality sound and of course control functions that do not happen on a PC or console.

Rubin: The mobile phone does have its limitations as a platform, but we see that as an opportunity to deliver games at a higher level of quality than a mobile game player would normally expect. One of the biggest challenges we face, though, is ensuring that well-known classics, like PAC-MAN, play exactly as expected on the mobile phone across the hundreds of different handsets that are available.

We customize each port so that it maintains its perfect arcade quality-no matter what a particular handset's performance is like. Because it is such a well known game, ensuring that PAC-MAN plays the same on the mobile phone today as it did 26 years ago in the arcade is extremely important to us.

Handset proliferation affects every product we make, whether it is an arcade classic or an original title available only on mobile. Porting games to the largest number of handsets possible is a great challenge, especially since we ensure that every game ported maintains the quality that Namco is recognized for. We treat every game on every handset as a new product, reviewing its quality and playability closely and ensuring it meets not only our standards, but also the high-standards of our consumers.

GiN: We here at GiN are certainly seeing a lot more cell phone-based games released. Do you have a handle on the current market and how much it is expected to grow in the coming years?

Rubin: I think you will continue to see growing excitement about mobile games because awareness of the incredibly large potential of the market is growing. According to IDC, the number of players purchasing mobile game will grow more than 16 percent annually, reaching nearly 50 million customers by 2010, which will substantially increase total mobile gaming revenue by the end of the decade. A recent IDC survey also shows that 11 percent of respondents purchased at least one game for their wireless device in the third quarter of 2006.

GiN: One of the best things about playing a cell phone game is that you can pretty much play anywhere, be it a crowded subway or, if you are sneaky about it, a boring board room meeting. What else do you think is driving the need for mobile games?

Rubin: With practically everyone carrying around a mobile phone everywhere they go, having access to fun and entertainment at the instant it is desired is a driving need for mobile games. Our games are designed with this in mind. For example, our games are instantly enjoyable with little or no learning curve. Since the mobile game player is a typically a mass-market consumer who may not have the patience to figure out how to play a game, it is especially important that games are easy to play. We also have games like Scene It?, with content that is continually updated and instantly accessible via the mobile phone's connectivity.

GiN: In the past we have seen some attempts at multiplayer games for the mobile platform, but this has mostly been limited to shadow-racing where you are competing against others but not directly. It's more like you are competing against their times or scores. Your new Pool Pro Online actually lets people play the same game at the same time? How does that work exactly?

Rubin: Head-to-head play occurs in a similar way to multiplayer games on other gaming platforms. When a Pool Pro Online II player goes online, they are logged onto Namco's game server. Opponents can be selected from a list of other players that have logged on but are not currently engaged in a game. The player interaction is administered by our game server and the fact that the interaction is being transmitted over the wireless network and the game play is being conducted and displayed on a phone make this technology really cool.

GiN: Does the Scene It game work the same way? How many people can play that one at the same time?

Rubin: Similar to Pool Pro Online, Scene It? Movie Edition takes advantage of network connectivity to enhance game play. However, Scene It? is more about the other major advantage that connectivity gives us – access to new and updated content.

When players start to play Scene It? on their mobile phone, they are actually being sent questions over the wireless network, giving them access to latest trivia about their favorite Hollywood movies. Scene It? Movie Edition also has a section called "New Releases" where players can play new, themed trivia packs that are released weekly. Players can then compare their performance to players across the country who have played the same trivia packets.

GiN: What is the business model for each of these games? People obviously buy the game, but then do they subscribe to a monthly service to play against others or is a pay by play type of model? How much would it cost a player to challenge someone else and play one of these true multiplayer titles?

Rubin: Typically, games are purchased via a one-time download fee or a monthly subscription, but networked games are usually exclusively subscription. The carrier determines the actual price, but as an example, Pool Pro Online II often has a monthly charge of $2.99. All content, whether it is challenging a player to a game of pool or access to new movie trivia is included in the subscription price.

GiN: We have to admit that true multiplayer on a cell phone is a pretty cool concept. Do you think that this is the way the industry is going, that gamers will eventually either demand it from their mobile games or perhaps think it's odd if a game does not have this feature?

Rubin: Because the mobile phone is a connective device, I think that people are going to begin expecting more and more connected features in mobile games. However, the success of a game depends primarily on how fun it is. Connectivity is a feature that can add to the fun, but is not necessarily the most important feature depending on the game. There will always be a demand for a diversified mobile game catalog that contains arcade classics, like PAC-MAN; 3D games, like Time Crisis; and head-to-head games, like Pool Pro Online where connectivity is integral to the gameplay.

Rubin: While we have not announced any other multiplayer titles, we have announced games that will use connectivity as a feature of the game, such as our SNOOPY and Dilbert branded games. We will be sure to keep you posted on all of our future titles.

GiN: We are excited about these two games and their innovative nature. Is there any other surprises from Namco Networks that you would like to talk about, or at least hint about for us?

Rubin: We're always working on new and exciting titles that will be coming soon to mobile. We continue to develop and market casual games like PAC-MAN, Galaga and Dig Dug, along with new original titles tied to mass market brands such as games based on SNOOPY and the PEANUTS characters, Dilbert's Cubicle Chaos and the recently released Scene It?

Also, we just announced the launch of Ms. PAC-MAN in the iPod. We look forward to opportunities to expand to future devices.