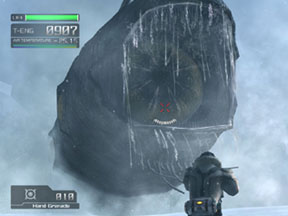 After thawing our way out of the recent winter storms that hit the area, I felt like I was living my own version of Lost Planet.

But at least during the winter storms, I didn’t have to worry about battling giant insect-like Akrid, piloting giant Vital Suits (VS), or having to keep track of my Thermal Energy.

That in a nutshell is what Lost Planet consists of. Taking place on an icy world called E.D.N.III, the game centers of a group of Snow Pirates who find a mysterious man known simply as Wayne. Wayne has only two memories: his name and the "Green Eye," an Akrid that was responsible for the death of his father.

However, despite being frozen under the ice, Wayne is in excellent health, mostly because of a device called a Harmonizer, which uses a unique fuel called Thermal Energy to heal him.

Thermal Energy is obtained from the Akrid, by attacking their exposed weak spots. But along the way, Wayne does not only have the Akrid to contend with to find the truth of his origin and "Green Eye," but also other pirates and warring factions.

While most of the combat will take place on foot, there are times when Wayne can access Vital Suits, giant mechs that can be loaded with attachable weapons. The addition of the VS does add a little variety to the gameplay, but when I played either the VS units were destroyed way too quickly or they get stuck in place and I’m not able to evade any of the Akrid’s attacks.

The control scheme takes a little getting used to, since most of the view takes place behind Wayne, but when turning there is a slight delay due to the crosshair movement. Thankfully this can be changed in the configurations menu. In addition, Wayne is equipped with a grappling hook to reach higher locations, but what I don’t get is why must you have to stand still to use it? Why can’t he apply it while jumping?

In addition, where is the A.I.? I can understand it coming from the Akrid, considering they are a horde of mindless insects. But when human soldiers stand still and take a lot of fire, you know you got issues.

Thankfully Lost Planet looks gorgeous. The Akrid are quite a sight to behold, especially the giant worms and moths, and the explosions are amazingly detailed. The only problem is that they tend to blind the player way too much, and since a majority of the game takes place in snowy conditions, that makes it harder to see. As for the audio, the voice acting is pretty good, not the best I heard but better than some other games that Capcom has released. The soundtrack is also above average.

Capcom did the right thing by waiting until after the Christmas holiday to release Lost Planet. It sure wasn’t going to blow away 360 titles like Gears of War, and now with the post holiday lull, it makes getting into Lost Planet more approachable. In the end, the whole game is pretty good, but nothing to really write home about.

Still, the icy world and the use of the suits makes the game a lot different than you will find in other titles available for the 360. Going into Best Buy you will probably see a lot of people crowding around playing the game, attracted by the unique graphics and gameplay. It’s just after playing for hours on end that you might start to chill slightly to the repetitive gameplay.