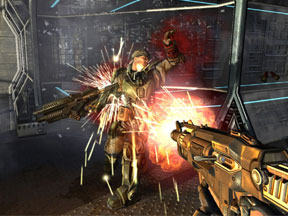 For centuries, men have dreamed about being able to manipulate time. From traveling back in time to being able to slow it down, there is nothing that man’s imagination has not conjured up. But what if a suit existed that allowed someone to control time? For that matter, what if two existed? This is the premise of TimeShift. You, of course, have one of the time-controlling suits. The other one is in the hands of a power-hungry man bent on taking over the world.

The first thing players will notice in TimeShift is the story, or lack thereof. While little snippets of the story are revealed through cutscenes (which pop up at the most inopportune times), much of the back story of the game comes from the instruction manual. Other than that, the player is left to fill in the missing pieces.

A game’s lack of a story can be forgiven, especially in the case of a shooter, if the gameplay is entertaining. Unfortunately, TimeShift disappoints on this end as well. There are flashes of brilliance at times, but ultimately, the game gets it wrong. TimeShift wants to be a game that allows players to freeze time, run through a crowd of enemies, and cause untold amounts of damage. This is fun. Sadly, this rarely occurs during the game because the Beta Suit, the time-controlling suit the player wears, only allows you to slow down time for so long before it needs to recharge. Players can slow down, pause, or reverse time only when the suit is charged.

The problem with the game does not exist in the fact that the suit needs to recharge its time powers. The problem occurs because the time manipulating ability lasts for so short a time. There were many times when I found my self running through a crowd of enemies while slowing time, only to have the suit need to suddenly recharge, leaving me for dead.

Another slow down in the combat of the game is caused by a need to take cover. While it may seem like the logical course of action to slow down or stop time and take out as many enemies as you can, it rarely works. Instead, players are often left with the tedious task of taking cover and waiting for one enemy after another to walk into the open, slow time down, and shoot the helpless AI. This process drastically slows the game down and makes it feel boring.

There is another serious problem with the game as well. Enemies can take hit after hit and not go down. There is no reason that a single, normal enemy should take half a clip of an assault rifle to go down. In addition to that, melee attacks can be extremely ineffective at times, doing absolutely nothing to enemies.

The game also features some "puzzles" that involve players using their time-controlling powers to get past various obstacles. Again, the game gets it wrong. The puzzles take away from the action and the only real clues to solving them come when the Beta Suit shows you which power it deems most appropriate. The puzzles seem to be an afterthought, thrown in merely to showcase the different powers of the suit.

TimeShift does have some redeeming qualities though. There is a decent selection of weapons, and players are able to carry three at a time. In addition to that, each weapon has a primary attack as well as a secondary one. In general, the secondary attacks do a lot of damage to crowds of enemies, but need to be used sparingly because of their limited number of shots.

The game’s graphics provide another headache for gamers though. The level design is unimaginative and dull. Despite the fact that the game takes place in an alternate time stream where doom and gloom is prevalent everywhere, a little color in the game would have gone a long way. Instead, one level blends into the next. The levels are also extremely linear, with little to no room for exploration. Each level seems to have a particular path that should be taken to get to the end, and doing it any other way will lead you nowhere.

The graphics do have a plus side however. And, as with the gameplay, it concerns the weapons. The weapons are well designed and the animations for firing and reloading are well done. There is a noticeable difference between primary and secondary fire. The animations for reloading a gun are nice as well, with each gun being reloaded in a unique way.

While the graphics are not spectacular, the audio of the game helps to bring it to life a little more. Every weapon has a distinct sound that makes it sound real, even the futuristic ones. Soldiers scream orders to one another and even make comments when you use one of the Beta Suit’s time-altering abilities.

There are several multiplayer modes via Xbox Live, but they all feature the same, uninspired gameplay that the rest of the game does. Not to mention that since everyone can control time in multiplayer matches, it takes away from you being a unique super-soldier.

Timeshift could have been so much more than it was. There are instances in the game when you can see what the developers had in mind, but ultimately, couldn’t serve up.

TimeShift gets 3.5 GiN Gems out of 5 for being a game that just didn’t quite deliver.