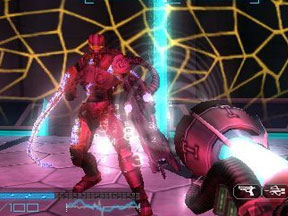 As a game produced by William Oertel, one of the main hands that is bringing us Silent Hill: Origins, I was using Coded Arms: Contagion to kind of gage what I could expect from him. My conclusions: God, I hope this is not an indication of what he’s doing to my beloved Silent Hill franchise.

Not that Coded Arms: Contagion is a terrible game-far from it actually-but it’s nothing to dance a jig about, either. It’s falling into that zone that lies in the middle of the spectrum, destined to be forgotten about weeks after its release.

In a high school dynamics explanation, this game is not the popular kid in class, but it’s also not the strange goth kid that writes crappy poetry and calls herself Raven. It’s the kid that is usually noticed because he’s so unnoticeable, and even that doesn’t add any more intrigue or mystery to him. He’ll probably grow up to be a senator.

The story for Contagion would probably appear as number 47 in a book titled 101 Used and Abused Plots. The entry would read as follows: A soldier enters a zone designed for training purposes, only to find out that the enemy has infiltrated the area. He must fight to get out alive.

I’ll grant that this story was not overly butchered while playing Contagion, but still, it’s obviously nothing new. The enemy in this case is a computer virus that manifests evil creatures bent on the player’s destruction.

Moving onto gameplay, we find that Major Jacob Grant has an assortment of weapons to choose from as he passes through the different levels. One of the more interesting aspects to the game comes with the upgrades menu, where you can make your weapons more powerful and easier to handle. This upgrade feature is somewhat extensive and very helpful for successfully completing later levels.

The in-level gameplay itself is very standard. Aim and fire, toss a grenade, run around looking for power-ups. There are some shortcuts thrown in to add another layer to the paths found in Contagion, but you tend to go back for the ammunition found on the longer paths anyway, so there’s really no point to them.

There is a hacker feature added into the gameplay as well, which is just two screens with five rows of numbers. For each row there is a number that hidden among both screens, and you have to find which number it is and choose it before time runs out.

This may sound like a meager task, even mundane, but to be honest, this simple matching game was one of the most exciting aspects that Contagion had to offer. If you find the number in each row, you unlock a door or get upgrade points. If you fail, you get more enemies to deal with.

The online features are as mediocre as the gameplay, so there’s really no salvation there.

The only thing that really surprised me about this game were the visuals during the cut scenes, absolutely beautiful, but they were very short. Besides, pretty cut scenes don’t do much to improve a flat-lined game.

So the conclusions are simple really: Nice try, Konami. Swing and a miss!

As a first person shooter for the PSP, Coded Arms: Contagion is"a first person shooter on the PSP. Fair at best. You should only pick it up if you are really bored and your copy of Metal Gear Portable Ops has been lent out. Let’s just hope this game was just being neglected while Oertel was working his butt off on SH:O.