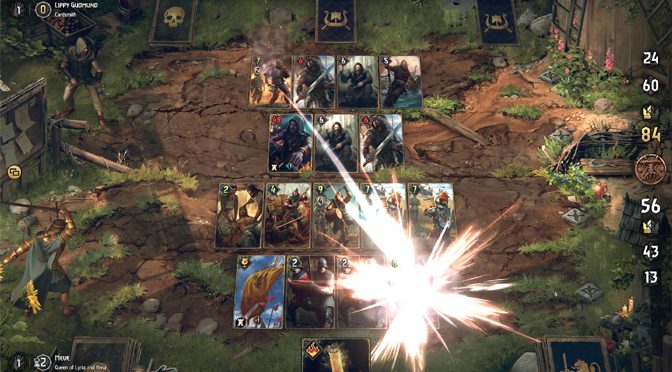 I was really looking forward to Thronebreaker: The Witcher Tales, mostly because it comes from CD PROJEKT RED, whom I consider to be one of the best developers around. I mean they released something like 14 free DLCs for The Witcher 3. Who does that?

And I thought it was extremely clever when they took the card battle game Gwent from The Witcher 3 and turned it into a standalone game. This made a lot of sense given the hardcore fan base and the fact that especially in the latter, paid DLCs like Blood and Wine, Gwent was prominently featured as part of the main plot as well as being a delightful side game. I know lots of people who would log into The Witcher 3 just to play a few rounds of Gwent, so making it a full game made a lot of sense. 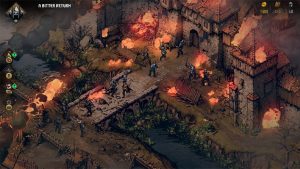 Now CD PROJEKT RED has created Thronebreaker: The Witcher Tales, which is another card battle type of game, but with an adventure and RPG front end to provide a story. You play Queen Maeve, who is the ruler of the twin realms of Lyria and Rivia, at a time just before the Nilfgaard invasion of the North. Obviously, this is a very chaotic time in the world of the Witcher, especially after Nilfgaard starts to march, so there is plenty of drama and competing factions, plus lots of fighting and opportunities for heroes to rise.

You will spend the majority of your time on the colorful, hand-drawn-looking main map. Here Maeve will wander around talking with people and collecting resources. You will need to gather soldiers, gold and wood in order to craft cards to fill out your deck and thus your army. This is rather easy to do by simply clicking on them. They are not really hidden, but quite a few caches are far off the beaten paths, so exploration of the map is important. While you wander, you will also be given various role-playing type choices, and there are both immediate consequences to your actions, such as gaining or losing resources, as well as long-term effects that change the story.

In addition to the main interface, you also have access to your camp which serves as your mobile command post. You can pitch your camp almost any time you like so long as you are not actively engaged in a battle or following a set-piece type event from the main plot. Your camp consists of several tents where you can read letters sent to you about matters of state or talk with NPCs who are serving or following you. You also have a workshop where you spend those gathered resources to build new cards. Cards can be extremely expensive, so gathering up every available resource on the main traveling map is quite important. 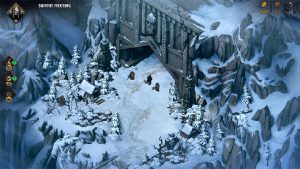 You can also use the camp to modify and change your deck. Clever players who take the time to study all the cards and their complex interactions can put together some pretty great strategies. They are only hemmed in by the in-game economy, gathering enough gold, wood and soldiers to create new cards. This overcomes my biggest problem with Gwent actually, which is that building out a perfect deck there pretty much requires microtransactions to buy needed cards, or a heck of a lot of luck, or both. Here, if you want to try a new strategy, simply spend your in-game resources and craft what you need. 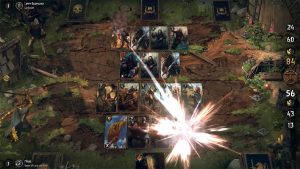 The adventure front end is nice, but the heart of the game is fighting using a battlefield of cards. Each time you get into a conflict, you will go to the card fighting interface. This plays out almost exactly like a game of Gwent, and has almost the same rules, if not units. There are a few differences like the addition of trophies or the way that ruler powers work, but basically, it’s a best two out of three match where you try to build up a higher score than your opponent before one of you has to pass their turn, runs out of cards, or simply forfeits (which is not all that bad if you force your opponent to deploy his powerful one-shot units only to concede the match so that you can beat him in the next round). 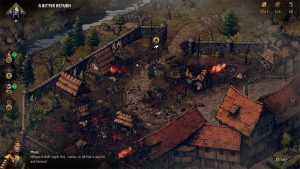 In addition to straight up battles, the world is littered with puzzle quests where you have to play a battle in a certain way, such as draining your opponents to one hit point without killing them, or protecting a certain card from touching an advancing enemy. I’ve seen puzzles like this during Gwent special events. They are far less exciting than actual battles, and generally can only be solved with one particular pattern of card play (your deck is limited in most of these mini-games) so they can be quite frustrating at times. Thankfully, you can just keep retrying until you figure out the pattern to play or the strategy you need to finally win them.

Graphically the game is quite nice and the cards come alive when you play them, briefly animating in a way that often looks magical. The sound is good and the voice acting is competent most of the time. 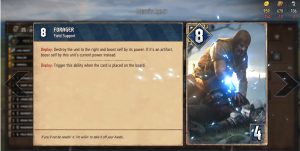 I had a pretty good time with Thronebreaker: The Witcher Tales, but I don’t know if the game will be all that successful. Gwent had the advantage of being a game inside The Witcher 3 that we all knew, and while Thronebreaker is set in that world, the connection to The Witcher is extremely tenuous. Then there is the fact that there are literally hundreds of card battle games on the market right now, so its extremely glutted with them. You can play any kind of card battle game that you like from sci-fi to historical to steampunk to fantasy, and on any platform from mobile to console to the PC. Valve and Steam just released Artifact, and even Gwent itself can be considered a competitor, for a player’s time if not money, to Thronebreaker. 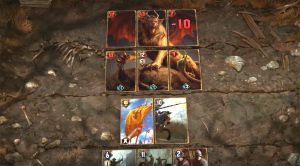 Thronebreaker: The Witcher Tales is a good game. If you are really into card battle games and want one more to play, and a good one at that, then by all means, you will get your money’s worth here. Also, the emphasis on a single player experience that is self-contained (and thus not subject to annoying microtransaction needs) is really nice. Thronebreaker: The Witcher Tales earns a respectable 3.5 GiN Gems out of five, making it worth playing a few hands if you like fantasy-based RPG card games.