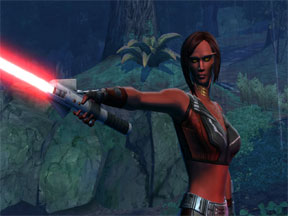 When I first started playing Star Wars ‘The Old Republic’ (SWTOR) I was amazed at the level of detail in the first opening scenes and training mission. I was, however, wary as many times before in MMORPG’s there’s an exciting intro, showing you as a heroic warrior/wizard/spaceman/alien kill-bot, before rudely dumping you into the big world, demoting you to junior pest control and demanding an arbitrary amount of rat tails in exchange for experience. Fortunately, SWTOR carries through on its early promises, by delivering engaging gameplay for all quests I have encountered so far and often improving upon them. This alone makes it an MMORPG worthy of note, but you don’t need me to tell you, it needs more than that to hold the attention of an army of expectant Star Wars fans.

The Force is Strong with this One

SWTOR hasn’t broken new ground when it comes to acquiring quests – it’s the usual case of looking for the NPC with a glowing symbol above their head. However, BioWare has gone the extra mile and eschewed the hum-drum text box, in favor of full on cut-scenes. Behold, as you and the NPC converse. These non-linear conversations have different outcomes depending on which responses you select from the conversation wheel. This will be familiar to players of other BioWare RPGs, such as Mass Effect, but it’s a rare treat for MMOGers.

Because of this vocal interaction, I instantly empathized more. ‘Sure alien farmer! I will go hike through the forest to retrieve some seeds for you. Not because you are offering fantastic rewards or huge XP, but simply because you smiled at me and I believed that you would be in a worse state if I refused’.

This level of immersion does backfire, somewhat, when you realize that the alien farmer has probably had a good hundred packs of seeds brought back to her today. Whilst to some this could break the fantasy slightly, you can only do these quests (apart form some ‘heroic’ variants) once.

This avoids the usual MMO pitfall. You know, that feeling of constantly fetching the same item from the same areas for a whole village who appear to be trapped in a ground hog day scenario. And by making the quest a one time only affair, it helps build the perception that your actions are having consequences to the game world.

In true BioWare style, SWTOR makes you feel like your decisions count. In one mission, I had to choose whether to allow a senator to die in order to capture the enemy, or rescue him, allowing the enemy to escape. Each of these produces a very different outcome for your immediate mission and your overall story line and future encounters. There are no save points or restarts, giving each encounter a sense of urgency and requiring a degree of forward planning.

It should be noted that when I turned on subtitles, some of these voice acted moments did become slightly tiresome as I was able to read the text faster than it was spoken. You can press a button to skip the dialogue, but I decided to turn off the subtitles, which allowed me to immerse myself in the game again.

Each of the eight classes (four for each faction) has its own unique story quest and share the optional side quests scattered around the different planets. The main story quests serve as a useful way to progress the player from the starter planets to the more dangerous and exciting worlds, occupied by tougher enemies. This progression tool works more smoothly and intuitively than simply realizing you are not getting enough XP from boars and now need to go find some bigger boars in a different zone.

It seems to be entirely possible to play through the main story quest with little to no interaction with other players. In-game currency (so far) has never been a limiting factor, as most quests and NPCs help keep the flow steady. New items are regularly dropped from NPCs or as mission rewards, meaning you never feel too under-powered. You can’t do it all alone though, as you’ll need a few player chums to access quests for higher-end equipment and the excellent ‘flash point’ group missions.

Flash point missions allow you and three other members to take part in a mission where you truly feel like a hero. They can range from repelling Sith invaders that are trying to board your ship, to using a drop-pod to surgically strike an occupied space station and recapture it for The Republic. These play out like the main story missions with the chat dialogue and different story outcomes, but it adds a new depth to group quests.

You’re presented with dilemmas such as, should we launch the missiles at a harmless moon or at the nearby Imperial fleet? I wanted to bombard the fleet, but my group chose to permanently change the planets tidal system, as the ‘light side’ choice. Each group member chooses the reply/action from the wheel and one is selected randomly, making it feel more like a real conversation, rather than a passive, scripted event.

The random selection of player dialogue choices does lead to some unpredictability. For instance, my straight-shooting commando may have been responsible for the group’s decision to blast an innocent engineering team into the cold embrace of space, in order to override a security system. The other option (chosen by the rest of the team) was to take the longer route to override and save the engineers – ho hum. Thankfully, BioWare has thought about this system and so rewards lightside/darkside points depending on your individual choice, regardless of what action is eventually played out.

I have made a few friends through this flash point system and now regularly run these large quests with them.

Combat plays out in a very similar manner to other MMORPGs, such as the likes of World of Warcraft, with the requirement to use skills in the optimum order, while balancing ammo/energy levels. The PVP and PVE games are fair and (at the moment) mostly balanced. Only the occasional lag spike can spoil the experience of these Sith vs Republic brawls. At the end of these PVP skirmishes, a players vote for other players, based on how well they preformed their class role such as healing or tanking, encouraging team play.

Mission bosses are also entertaining, varied and often a challenge. PVE combat is aided by your choice of companion, an NPC who follows you and aides you in your missions. Relationships, including love interests in typical BioWare fashion, can be built between you and your team members unlocking bonus missions and items.

The missions and over-arching story feel entirely Star Wars. The sound of blaster fire and hum of light sabers bring back memories of watching the films and wanting to carve your own story in that universe. Familiar locations and alien species also help to cement the experience. And the first time you have a story moment with one of your companions, in a cantina with the all too familiar Star Wars jazz gently tooting in the background, a huge wave of happy washes over you. Whilst it never feels like you are single-handedly saving the galaxy, your actions and exploits do make you feel like part of the bigger struggle for the fate of planets and solar systems.

A word of warning – this game is rather system intensive, so if you are running an older spec PC, you will encounter long initial loads times and possibly some lag when the action starts to increase on-screen.

BioWare has delivered an MMORPG experience that, thankfully, has been worth the wait. Whilst it would not be recommended for those seeking a more ‘sand box’ experience, it is entirely suited for those people who loved Mass Effect or Dragon Age and wish to carve their own story on-line in the Star Wars universe. It remains to be seen how the metagame plays out and what direction BioWare expands the system and gaming experience, but they’ve made a good start on a title that was weighed down with anticipation.