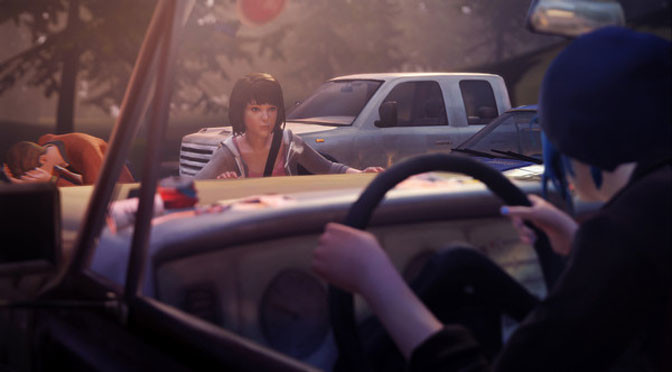 Life is Strange: Episode One

Life is Strange, a new episodic game from French developer,  Dontnod, opens with a monochrome dream sequence. Swirling wind, dark skies and a lighthouse looming on the bluff create a menacing atmosphere that some may compare to Alan Wake. Max wakes from her daymare, finding herself dazed and confused in the middle of photography class. Soon after this opening, she discovers that she can rewind time at will and this is the main gameplay conceit.

Our protagonist is college kid and budding photographer, Maxine “Max” Caulfield. After her family moved to Seattle, Max has returned to hometown of Oregon to study. She’s a shy outsider, navigating the usual teen minefield of popular girls, jocks and adults you can’t rely on.

Max has one friend at her new college, a boy called Warren, who is clearly smitten. The queen bee is a rich bitch called Victoria, who is a key member of an elite club for the popular kids. And then there’s Max’s childhood friend, the blue-haired rebel, with strife at home and a dead dad. Add to that the missing person posters of Rachel Amber – she’s the Laura Palmer of this piece, I’m hoping.

You may have noticed that the cast of characters may seem a bit teen-drama-by-numbers. All the cliche characters are there, but Life Is Strange manages to effectively evoke that feeling of school and the cliques and the mini, daily dramas. Someone’s boyfriend cheats on them, that nerdy kid gets bullied in the hallway and your teacher gets angry at you for not knowing something he thinks you should.  The only difference is Max can go back in time and try to change things for the better.  And that’s when it gets interesting.

When she first discovers her powers, Max has to try and stop a girl in the toilets from being killed. She can rewind time back by  a few minutes , which is reminiscent of Dontnod’s first game, Remember Me. If Max picks up an item, it remains with her, even when she rewinds. So essentially, she’s moving through time, rather than reversing it. The mechanic is used for some simple puzzles, but generally it sets up narrative threads that will be exploited in future episodes.

At times you feel like you’re cheating at life. Awkward conversations that end badly can be rewound, until you find the responses they want. Max can get questions right in class, make new friends and neutralise enemies this way. However, the game always reminds you that these choices have consequences and the temptation to rewind is always there.

Without the time travel device, the game’s choices would have taken a moment’s thought and I’d have moved on. But the rewind function heightens every decision.  You can embark on a conversation or activity, knowing you can try it another way, but once you know all the options, it’s time to plump for just one. But which one is the best? Which one will come back to haunt me?

Once you do make a decision, Max usually says something to seemingly indicate whether it was the wrong one. I suspect these comments are red herrings, some of the time. By the end of episode one, called Chrysalis, some of the consequences of my choices reared their head and they weren’t always good, but many outcomes are yet to be revealed.

Not everything you decide is life or death stuff. Do you stop a bird from flying into a window pane? Do you water your plant? Do you snoop around a girl’s bedroom and exact revenge for a previous exchange or rise above it and extend the hand of friendship?

On a couple of occasions, there were narrative reveals, which made me gasp, but Max didn’t react to. Small mistakes in the narrative thread, I suspect, but not game breakers.

Overall I thought the writing was good, in terms of characterisation. However, the dialogue could be awkward and I wasn’t sure about the teen slang. Does anyone say “hella” or “rawk”?  It could be the result of dodgy translation from the French, so I’ll let it slide. In contrast, Max’s diary entries are brilliantly written. It brought my own teenage diary scribbles flooding back – stuff about boys, decisions about college, all that stuff.

[amazon asin=B00SRZHE4K&text=Buy Life is Strange, Episode One Now from Amazon!]

Life Is Strange works best when it’s dealing with small things in life, but Dontnod has added a save the world (or town) element, which I’m not sure about.

When a character explained the college’s history and said something about Indians, alarm bells rang. Uh oh. I’m hoping the swirling vortex of darkness that’s threatening the town in Donnie Darko style isn’t some Indian burial ground hokum. The set-up has the potential to spoil an otherwise promising story, by throwing in some supernatural guff, to make it seem more like a ‘game’.

Life Is Strange’s first episode is a strong start to the series. I’m intrigued. The world is detailed, giving a strong sense of place and the characters who live in it. The afternoon sun filter gives the graphics a nostalgic, indie film feel, complete with dreamy folk-pop singer with guitar soundtrack. Some may be put off by the slow pace, but I enjoyed its YA feel.  This is a game that follows in the growing tradition of walking games like Gone Home, and Tell Tale’s character-driven games, so I’m not expecting guns and action.

There’s a missing girl and a dark force threatening Max’s sunlight drenched town, while she struggles with all the things teens struggle with. I want to know if Warren ever declares his crush, if Chloe’s rebel act is just a front, what the deal is with the principal and the dodgy college security guard. And what the missing girl has to do with it all.

Sign me up for episode 2 – Life is Strange is the game I wish Beyond Two Souls had been. In short, this is how to write an interactive story, as long as it doesn’t take a David Cage swing to the ridiculous in later episodes. Episode two is coming in March – can’t wait.