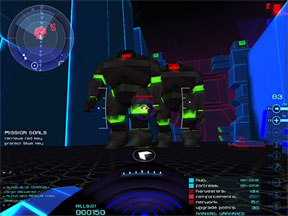 When I started playing Tank Universal: Challenger Eight, I did not really know what to expect. Normally when I load up a ten dollar game, I end up getting what I pay for. However, Tank Universal turned out to be a highly impressive title with a ton of surprises, like an engaging plot and highly varied levels.

This is literally one of those games developed by a guy in his basement or garage, you know, where the heart and soul of this industry is supposed to be. That’s not really the case anymore, but here that spirit is alive and well.

When I loaded up the game, the first thing I saw was not some slick neon-outlined tank sitting on a computerized grid world, but a middle-aged guy named George. The narration proceeded to tell me that George had gotten some bad news that day and that his doctor told him that he had something wrong, as in fatally wrong. My guess is that it was cancer, though it was never really stated. To take his mind off his troubles, the doctor gives George a virtual reality headset. (Man, George must have some good medical insurance.) Anyway, when George gets home he puts on the headset and we are transported into the game world.

At first things are pretty normal. You are on foot and told to explore the world, which looks like it was ripped from the frames of the movie Tron. The controls are fairly easy to master with movement dictated by the keyboard and turning with the mouse. Later on you can fire with the mouse, but at first you are just walking around.

Pretty soon however, you start to get the feeling that this is no ordinary VR headset. There are other computer people in the world, going about their lives and talking, and things start to seem a little bit too real. Anyway, you are eventually rounded up and sent to an arena to compete with other computerized people against the current leader of the sector, an all-seeing eye sort of like the one from Lord of the Rings. Supposedly this is a fair competition and the winner will become the new leader. Only the eye is not playing by the rules and plans to kill all the competitors before they even get started.

George, now known as Challenger Eight, is given an opportunity to escape that fate by the resistance, which blows a hole in a wall and lets him escape a trap.

From that point on, George is running missions for the resistance in their fight against the oppressors who control the sector.

Again, I for one was not expecting this game to have a pretty detailed plot. There are even subtle things that have to do with the plot that are occurring all around you. For example, in between levels you are shown a load screen with information about what company designed the headset. However, as you progress in the game, the load screen gets increasingly broken up, a sign that something might be wrong with the headset. At one point, something George does within the game even has repercussions in the real world. So there is an element of "just one more level" to find out what happens next and to some extent, to see if George is going to be okay or not.

But it’s not just the plot that keeps you going. The gameplay here is also very solid. Based on the training levels, I expected one capture-the-flag type fight after another. But to my surprise, the levels are all very different from one another. On some you might be rushing through a maze trying to hold control points, on another you are on foot helping a village deal with a virus and on still another you are providing cover as friendly transports try to escape a closing ring of enemy forces. You never know what type of level you are going to encounter, which keeps things interesting through all 20 of them within the game.

Graphically the game looks great, and even runs on most systems that are not quite high end. Everything is pretty much outlined, kind of like the game Battlezone if you remember that. But everything here is also made of bright colors which are mostly blue and red, though there are some greens and yellows as well depending on where you are located within the computer network. Everything glows really brightly too, which kind of looks like Vegas at night. If your computer has trouble with the graphics, you can turn off the glow effect and recapture a lot of your framerates without hurting the graphics one bit, other than not seeing the cool glow.

Most of the time you will be inside your tank, which is a heavy tank model. You have one main gun that can be fired normally by pressing the left mouse button or charged by holding it down. You can almost knock out light tanks without charging your shots, but to crack the enemy heavy tanks you will need to charge up your shot close to its maximum, or else hit them several times. If your shot lands close enough to your own tank, you will see the explosion on your radar screen and can depress or elevate your barrel accordingly for your next shot. Sometimes shots even bounce off of enemy tanks or your own, which is frustrating but cool at the same time. Once I even skipped a shot down a long hallway into an enemy. The bounces happened less than five percent of the time as far as I could tell, and added a nice element to the game, especially when a shot bounces off your tank. You hear the ricochet sound and can breath easy knowing you literally dodged a bullet.

Whenever you kill an enemy, there are little diamonds that appear in their wreckage. If you collect these, they can be spent for powerups like firing homing rockets, dropping mines or launching smoke. The enemy, and even friendly tanks, will all scramble to grab these power-ups before you, so you need to be quick if you want to get them. Overall, the enemy AI was pretty smart and only occasionally got confused and hung up on one another, mostly in maze levels where I play an excellent game of cat and mouse.

There is also a level setting for difficulty. If you find that normal is too hard, you can set the game to easy. And if you are not challenged, you can jump things up to difficult. The level difference as near as I can tell effects the strength of your tank’s shields, meaning you can take more hits more often on easy, but does not seem to dumb down the enemy AI, which I think is a great way to make the difficulty settings work without fundamentally changing the game.

If you finish the main game or just want instant action, you can play a skirmish against the computer, which mimics a couple of the levels in the game. A skirmish has two fortresses complete with walls and turrets and even force shields along with constantly spawning tanks and vehicles (so long as the side continues to collect glyphs to power these efforts). You will encounter both friendly and enemy artillery, light and heavy tanks and sometimes even bombers in these battles. The goal is to keep your key safe (which is located in the middle of your fortress) while fighting through your enemy’s defenses to get to theirs. If you get their key back to your base, you win as the other team is deleted. Again, at first I thought this would be all that Tank Universal was about, which would not have been terrible really, but it’s nice to see that you can play this mode as much as you like. Everyone loves some instant action and depending on how good (and lucky) you are, these battles can take anywhere from ten minutes to an hour or more.

In the final analysis, I don’t think you could find a better $10 game than Tank Universal. Really, if this game had been priced at $20 or $30 it would still be a good value. At just $10, it’s really an insanely good deal. But don’t just take my word for it. You can go to TankUniversal.com and download a demo to try it out for yourself.

Tank Universal proves that small developer teams really can create quality games that can compete with the big boys out there. It offers a compelling storyline, great action-packed gameplay, and the chance to explore the hidden world inside your computer while blowing stuff up. It earns 4 1/2 GiN Gems for a job well done.