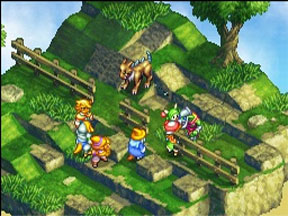 Final Fantasy Tactics A2:
Grimoire of the Rift

Final Fantasy Tactics A2 starts off in modern times with the main character starting his summer vacation from school. He is eager to get out and start his vacation when his home room teacher stops him to tell him summer vacation does not get to start for him just yet. You have to go down to clean the library because you were a slacker all year. I wanted to revolt! Here summer vacation has just kicked in and you are stuck having to put books on shelves!

And speaking of the books, when you get down to the library the books are just as big as you are! I’m sure it is just how the game was designed but it’s still funny. You would be there all summer just figuring out how to move one of them!

So you go downstairs to the library and the librarian is nowhere to be found. You call out and look around but no one responds. Suddenly your eyes fall upon a large aged book resting on a corner table. This is the Grimmoire. You sit down out of curiosity and open the book. It tells a magical fantasy story of "the 20th of Goldsun where the sun shines in an unfamiliar sky." Already your character’s attention is grasped. The legend continues, "Today is the day my adventure begins. One is fated to fill these barren pages. Know you his name?" Sure that last part comes off a bit Yoda-ish with the backwards talk, but there is a blank in the spot where the adventurer’s name is to be mentioned. This is where your character grows excited because he sees that his name is to fit in the blank. The game takes you to your character screen where you get to name him. I named mine Guido.

Immediately the book comes to life and transports you Quantum Leap style into the world of Ivalice. That’s right. This is a branch of Final Fantasy XII. That is enough for you to either look further into the game or hate it immediately. Definitely the deciding factor for some.

When you land in the world of Ivalice you find yourself amongst a clan of warriors who are fending off a giant chocobo. It is threatening, as you are told, to peck out your eyeballs. Personally a bird that big would be after more than that, but this game is rated E10+ for a reason.

The clan is led by Cid. Yup, Cid is in this one too. Cid is called a revgaji (honestly I have no clue what that is. I had to look up his description in the instruction manual). He is blond with a brown face. He has two small horns protruding out of his forehead and long ears coming out of the sides of his head. His chin looks like a stick with small horns on the front sides. Cid becomes your mentor for the duration of the game. He fights at the control of the AI and is an incredible strength for the group.

Cid explains the peril before the clan and convinces you to join the clan immediately as to avoid death at the beak of a giant chocobo. You agree and the chocobo is defeated. From here you get to name your clan.

Battles are chosen in the local pubs in the villages you visit. Each pub has a bulletin section where players can see the latest quest availabilities as well as maintain quests they have accepted. When you accept a quest a marker will be placed on your map. You have a set amount of days to complete a quest. The time limit is specific to the quest. You need to be careful because every time you cross into another town on your world map a single day will go by.

Also in the pub bulletins are various side quests. You can go hunting for animals like wolves or beetles, some of which are menaces to the locals. You can also go on trade missions where you swap items for gil and attributes or other valuable items. Then you can also go straight into battle.

You start the game out with a black mage, white mage, and an archer. Battles have certain rules. They all have a judge who watches the fights and dictates both forbidden actions and privileged abilities to your team. For example, your black mage starts off with Fire, Thunder, and Blizzard attacks. If the judge chooses one of your abilities as forbidden and you use it anyway you will lose the judge’s favor, the battle, and anything goes.

As far as controls go the stylus is pretty useless. You are actually better off using the D-pad. I tried using my stylus to move around the map or to move my character around his or her free spaces on their turn in battle and the stylus was actually in the way.

In battle you collect rare and valuable items which you can trade in later as loot. Loot improves the overall clan experience and your growing arsenal. You deal with loot in the shops where you can also use a fitting room to try on different gear and see how it will affect your clan before you make a purchase.

I thoroughly enjoyed the many options to play around with in this game. For a lengthy game like this I would say that the more the game is free to customize and choose, the better the game play experience. This was actually my first tactics experience so I noticed the differences between a tactics game and a traditional RPG right away. This game has great 3D graphics, smooth and catchy dialog, witty humor, and a great story twist with the merging of the real world and the fantasy world.

It earns a perfect 5 GiN Gems for offering something completely different to the genre, and yet holds onto that similar genre we have come to know and love.