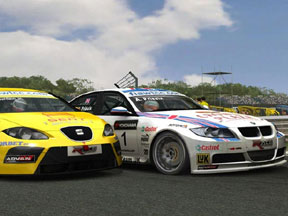 Don’t let the simplistic name of Race 07 lead you to thinking that it’s a simplistic racer with no innovation. This SimBim-developed racer follows on the tradition of their previous products (GTR, GT Legends, and GTR 2) in creating the most realistic racing experience ever found on a PC title. In fact, Race 07 tops even their previous entries in the increasingly crowded racing field. If you want realism in your racer, then Race 07 is the way to go.

Whereas the past titles centered more on the GT based racing circuits, Race 07’s focus is that of the World Touring Car Championships. It might not be as well known in the States as NASCAR or IndyCar, but it does have its following, which Race 07 was designed. Those of you familiar with the WTCC will find all the rules and cars for that circuit, but even if this is the first time you have heard of the WTCC, the core of any great race game is competition driving, and Race 07 has got plenty of that.

While the focus might be the WTCC 2006 and 2007 cars, Race 07 also features Formula single seaters (a first for a SimBin title,) the classic WTCC 87 lineup, and even a MINI Cooper series. Fans of The Italian Job (either the classic 1969 movie or the just as good 2003 remake) will feel quite at home driving the cars that made the movie so famous.

All the tracks of the WTCC are recreated faithfully in Race 07 in typical SimBin fashion, but also include variations of each of the tracks and a few bonus tracks that are not in the WTCC. Some of the bonus tracks are quite cool, though even the standard ones are challenging.

A tradition that the SimBin racing titles can boast about is having spectacular racing AI and realism, something that is missing from most of the other current racing titles on either the PC or consoles. Thankfully Race 07 continues the trend of realistic AI driving that feels more like a human opponent than lines of code. However, this time the AI will expand into the online features of the game as well. No matter how many human opponents you may have online at the same time, there will always be a full grid of aggressive drivers seeking a win.

Really the AI of the racers can’t be overstated. If you play Race 07 and then go and play one of the popular driving games, especially ones for console platforms, you are going to wonder why the AI in the latter offerings are so stupid. In Race 07 each AI racer has a personality and sometimes they even make mistakes. And there is no pack-driving where the computer is merely trying to keep up with you or slows down to let you catch up. It’s a race after all.

Visually Race 07 is a gorgeous game, even more so than the past few SimBin racers, which were all quite good. Each of the cars is detailed to perfection, right down to the realistic cockpits with instruments rendered in real time. Only the Project Gotham series on 360 could even try to rival them in this area.

But where Race 07 really stands out from the pack is the use of real time weather and environments. Sure, players had to deal with rain and snow before, but how many games have you using your wipers to remove dirt or bugs? That’s right, the wipers are needed to remove any bug juice that might clutter a windshield, and in the WTCC, a smeared windshield can easily mean a wreck!

Each of the tracks have received a major facelift, and they look even better than when they might have appeared in previous racing games from SimBin. But the best part is that despite all these upgrades, the game still runs quite well on current computers, which is a pretty amazing statement given everything going on in the background of Race 07. The recommended system requirements are a 3 GHz Pentium IV, 2 GB RAM,, 2.5 GB hard drive space and a 512 MB 3D accelerator card.

Ok, SimBin has covered the GT racing circuit, and now they have covered the World Touring Car Championships, both with amazing realism that race fans have been dreaming about for years. Wonder what they will try to conquer next?

Race 07 is not only one of the most realistic racers available on the market, but also a steal at just $30. Now if only EA could get SimBin to work on their next NASCAR game, it might make up for the huge disappointment that NASCAR 08 was. SimBin really is the best racing game designer in the industry, and a few quick laps around the tracks in Race 07 will make anyone a fan.

Race 07 earns a perfect 5 GiN Gems, because really, there is not much you can do to make a better racer.