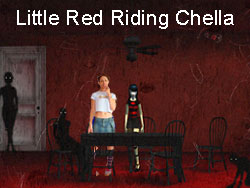 Indie Developers Make Their Own Path

Ever thought that the games industry needs some indie darlings? Okay, so we have Jeff Minter fighting the good fight for giraffes and llamas, and Lionhead liked to do its own thing, until recently being bought by Microsoft. However, it's not exactly on par with the Sex Pistols or crazy kids like Kevin Smith once was, racking up credit card bills just to make a movie.

Cinema's always had its indie kids, with the likes of Jim Jarmusch and Tim Burton and even Sophia Coppolla. Although, Jarmusch is arguably the only true indie of those three. Nevertheless, they all seem to follow their own path, making movies outside the mainstream and saying what they have to say, rather than regurgitating the latest fad in superheroes or badly adapted classical texts.

Likewise music has its exponents of thinking outside the box. PJ Harvey's constant change of tack or Tori Amos and newer figures such as Patrick Wolf are the enfants terribles of the industry and refuse to fit into any industry box.

However, when it comes to the games industry, we seem to be a little bit short of artsy fartsy expression for its own sake. Perhaps games aren't art. Perhaps we've said all we have to say and it mostly concerns alien invasion and killing things in new and inventive ways.

All is not lost though dear play chums. Tale of Tales is flying the flag for the art house crowd when it comes to games. You may remember that some time ago, I was roaming a virtual forest as a mystical deer and communing with other deer. The latest game from this team of Belgian artists Auriea Harvey and MichaÃ«l Samyn, The Path, offers up a gothic retelling of the Red Riding Hood fairytale.

Anyone who's played The Endless Forest will feel slightly at home in this setting, as it looks like the same engine is being used. However, any memories of frolicking with your fellow deer friends soon vanishes as you venture into the forest. The asphalt road you stand on comes to an end and changes into a forest path.

"Stay on the path" the game tells you. Of course your first instinct is to stray into the dark, misty wood with the shrill tones of flutes, scratches and screeches ringing in your ears. The eerie music is accompanied by a plaintive woman's voice humming over the top of it, adding to the disconcerting atmosphere.

The Path isn't a retelling of Little Red Riding Hood. It has more in common with Angela Carter's novel, A Company of Wolves, merely using the fairytale as a framework to explore the theme of growing up and the path through adolescence to adulthood.

The Path isn't even a game in the conventional sense and we all know that the games industry is a very conventional beast. In terms of genre it fits loosely into survival horror, but merely in terms of atmosphere, rather than gameplay. The Path website puts it best, "There is one rule in the game. And it needs to be broken. There is one goal. And when you attain it you die."

This concept could pose an interesting challenge for the average gamer. The Path asks us to shrug off the preconceptions of previous gaming experiences and go on a journey of play. There's no real goal except to wander through the forest and see what you may see. On your travels you do acquire items, but whether they do anything is still unclear as the game is still in early development and isn't due out until next year.

Red Riding Hood is used as an archetype of girlhood, rather than a character with a basket and a failure to recognise a wolf at twenty paces. The Path is an exercise in atmosphere and playing for playing's sake. The player is free to roam and straying from the path is the one thing you are supposed to do.

Once in the forest, you're immersed in a dark misty world with stylised plants and leaves. The murk plays tricks on your eyes as clumps of grass become shadowy figures lurking behind trees. Then you do see something – a gravestone perhaps, or a girl running through the forest.

At the end of the road is grandmother's house – a gratifyingly spooky affair, with dark corridors, ticking clocks and rocking chairs. However, head straight down the path to grandma's without exploring the horrors of the dark wood and you miss out. I only played a short and early demo, so the dynamics of the game are still unclear, but there's a sense that the wood will conjure up more for the gamer and items collected may serve a purpose.

There are already other mysterious characters and hints of a meeting with the wolf, but nothing more as yet. The demo was just a tantalising glimpse, but enough to pique my interest.

What it currently lacks in clear gameplay, it already makes up for in style. From the very first screen there are scratches and flickers reminiscent of old movie footage. The music ramps up the atmosphere and the figure of Red that I played with will go down well with the emo kids with her sheet of long black hair, pale face and dark eyes. The screen itself is edged in a dark mist and when you start running your character's heartbeat thunders in your ears, bringing your own up a pace or two.

Dark, broody and in the tradition of the brother's Grimm, The Path promises to deliver something different. All I can say is watch this space for the latest from the game industry's only indie darlings – Auriea and MichaÃ«l of Tale of Tales.