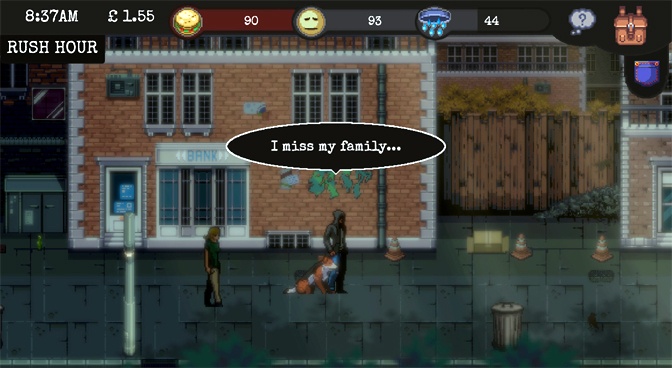 I was really happy to find CHANGE: A Homeless Survival Experience on Steam. Many years ago I worked to help increase awareness for the homeless problem, and although I think the efforts of the group I was working with did some good and even got a few people off the street, in the end nothing much happened. I wonder if we had access to a videogame like CHANGE: A Homeless Survival Experience, if we could have done some more good.

The biggest problem with fixing homelessness from what I have seen is that every case is different. You have, for example, people who are homeless for economic reasons, and they are relatively easy to help if local governments have good programs in place. But then you also have a lot of people who have mental problems that end up on the streets, and a large portion of them don’t actually want to be anywhere else – and may resist violently if you try to assist them. You also have a lot of drug addicts who end up homeless because they spend every dime they can get on their habit, as well as abused people who have all but given up. Developers Delve Interactive, who according to their Steam writeup were almost homeless themselves at one point, smartly included many of those scenarios in their game. 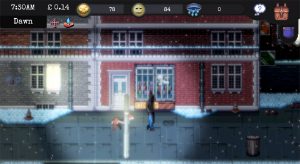 In CHANGE, you play a newly homeless person out on the street. There is a veteran homeless guy who offers to give you a little advice on how to survive, and this acts as the tutorial for the game. I was pleased to see the tutorial, because even though CHANGE is relatively simple to play, its nice to know how to do basic things like talking to people, begging, avoiding the critical eye of the local policeman, collecting scrap for money and where to try and find a meal. After your talk, you are sent out into the cold world.

The world of CHANGE is linear as you walk up and down what is, as far as I can tell, the randomly generated streets of a nameless city. At times, this randomization does not make a lot of sense. For example, I once saw a police station sitting beside a recycling center and then another police station on the other side. That was one well-guarded trash collection service. 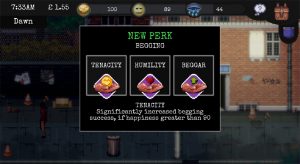 As you travel, you have the option to partake in various activities that might help your character’s situation, like begging for change from passersby, rooting around in the trash for discarded food or collecting bottles and other scrap to exchange for money at a recycling center. There are also location-centered activities that you can do if you happen to come across the correct building. These include things like public restrooms where you can clean up or warm up, laundries where you can wash your clothes, libraries where you can study to try and become qualified for a job and shelters where you can sleep for the night and sometimes pick up an additional benefit depending on what community activity is happening at that shelter.

As you continue to survive, you will earn perks, which is a key component to the game. There are over 130 perks which can be earned, and each one makes the game a little bit easier. The game also normally lets you choose between a set of related perks whenever you earn one. And because you are earning perks based on your reaction to events or activities that you are doing, they directly help your playstyle most of the time. For example, if you eat a sandwich you find in the trash and it makes you sick, you might get a choice of an iron stomach that resists disease or the ability to fill your hunger meter higher when you eat discarded food. 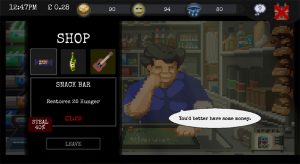 Graphically, the game looks pretty good. It uses pixel graphics like a lot of indie titles these days. You can tell what everything is and things like rain and snow falling are obvious. The scale is a little bit larger than most pixel-based games, so CHANGE shows a lot more flaws. Games like Yes, Your Grace and Don’t Escape don’t look any better than CHANGE, but hide their flaws in a smaller scale. There is nothing wrong with the graphics, but it’s hardly eye candy.

Your biggest enemy in CHANGE is, surprisingly, the game clock. Time flies by way too quickly. I understand that it’s there to add an element of time management in games like this. One of my favorite time management adventure games is Beat Cop, which has a similar side-scrolling city interface. The difference is that Beat Cop gave players a sense of place, so that you knew that one gang hid out in the back room of the appliance store at the end of the block, where the druggies proliferated, and where to find illegally parked cars to ticket (which you always had a quota on). So you could strategize where to go and how to approach each day. Plus, while the clock ran quickly, it was still fair. 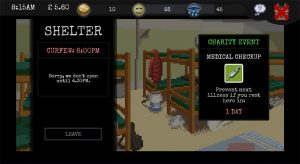 In CHANGE, you go through hours every minute. I can’t believe that the game clock is set to go so fast. I would wake up from the shelter each morning, ask two people for change, root through one trashcan, and it was already past noon. And your total play time each day is limited, because apparently homeless people don’t wander the streets after 9pm. After that, the screen fades to black and you start a new day, after apparently sleeping on the sidewalk.

Given your walking speed, you can only jog past maybe ten buildings in a day. And it’s half that amount if you want to make it back to the same shelter by nightfall. You have to move so quickly that CHANGE becomes a game of clicking on as many things on the screen as you can to try and collect bottles, get money, find food, talk to important characters and find resource buildings. You are clicking like mad, instead of contemplating what it means to be homeless. 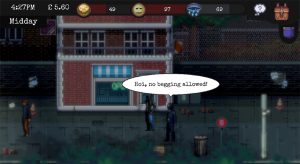 If the game clock moved a lot slower, CHANGE would be more tactical, and more enjoyable for strategic players. You could actually plan ahead and set goals for each day, like how long you want to study in the library, how much you need to make busking (once you get the guitar) in order to buy good food, which shelter offers the best advantages to sleep at, how long before you are ready to apply for a job, and other activities as you struggle against your homelessness. I suspect that the developers didn’t do this because it would make the game much easier too. The rapidly spinning game clock adds an artificial level of difficulty. Personally, I don’t think it needs to be there. And it draws the focus away from having the player contemplate what it means to be homeless. Because it’s not running down the street grabbing bottles and cans every day at breakneck speed.

On the positive side, I do like how you are often given choices where you can be selfish or generous with other people. The really eye-opening thing is that as gamers, we often like to pick the good choice so that we can become paragons of virtue on some morality scale. In CHANGE, the best choice is normally to be selfish, because that is how you survive. Sure, giving the last bed in the shelter to a young kid that night might make you feel warm inside, but it means you might die out in the cold, and the kid probably wont even thank you. That is the harsh reality of survival out on the streets, and when CHANGE is presenting it like that, the game is at its best. 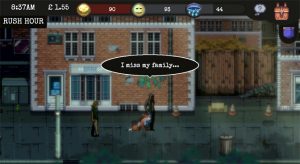 In the end, while I fully support the mission of CHANGE: A Homeless Survival Experience, as a game, it leaves a little to be desired. Slowing down the game clock would be a big help, as would adding more of a story, missions or some type of daily goals beyond just wandering around and surviving. As it stands now, at $15, CHANGE is not a bad deal. There are better side scroller adventures on Steam right now, but none are likely going to be quite as unique or as eye-opening as CHANGE.