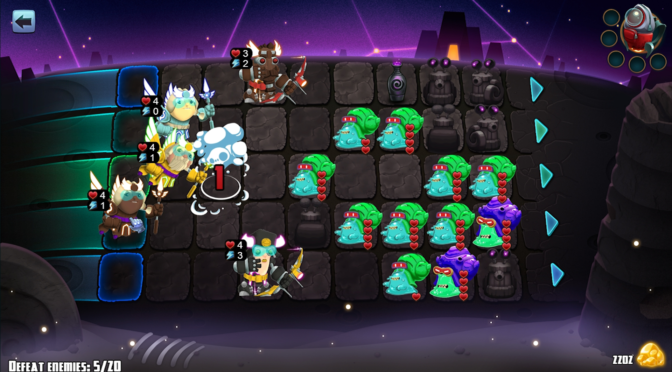 In these serious times we can all use something that will make us laugh. Fortunately, Star Vikings is a game that will do just that. Star Vikings is a turn-based game that has adventure, strategy, and puzzle-solving, and harkens back to the golden days of casual games, when we were treated to such greats as Peggle and Plants vs. Zombies.

The story the the Star Vikings begins with Captain Thork at the helm of his ship. His trusty computer O.D.I.N. tries to warn Thork of an impending collision, but Thork wants to wait to hear the end of the song he’s listening to. So of course they crash right into a ship full of snails. Yes, snails.

Thork decides to charge and attack the snails without bothering to find out who they are or what they want. Thus is forged one of the great enemy pairs of time – Pirates have their Ninja, Angry Birds have their Pigs, and now Star Vikings have their Snails.

The basic layout of each stage is reminiscent of Plants vs. Zombies, if the player took the side of the Zombies. There are five rows, and each of your eventually up to five Vikings starts on a different row and generally stays on that row, moving forward and never backward. When they run into a snail, the Viking does their base damage and then the snail does its attack if it is still alive. If a Viking gets to the end of a row they leave the level. Once all Vikings have left or died, the stage is cleared and the survivors move on the next.

If this were all there was to it, it would be a short, very frustrating game indeed. But, each Viking has a special ability that they can use a certain number of times before they run out of energy. This ability is different for each “class” of Viking, so you can have a variety of powers at your disposal. For instance, Thork can fire a mortar shot that can hit anywhere on the board, allowing a row to weaken or even clear before anyone has to engage in melee.

Also on the stage grid are objects that will give up coins, and sometimes chests that will yield a special object. Anyone damaging these by any means allows you to harvest the booty by clicking on it. You will later encounter traps that will fire when damaged. They are facing one of the four cardinal directions, and will damage one or more objects directly in front of it.

The map is divided into zones that are interconnected. To get to a zone further along you have to succeed in the zones on the way, though there is some branching. To beat each zone you will have to play levels until to meet the win condition. This could be to defeat a number of monsters, to open a number of treasure chests, or simply to beat a number of stages. Once a zone is beaten, the paths leading from it are now open. Sometimes a path is locked unless you spend fuel (which is often given out as a zone reward) to cross it once. After that you can go through it freely.

Each snail a Viking kills, chest they open or gold they harvest earns them experience. Enough experience will earn them a level, at which point you can select either the next stat improvement (either health, energy or melee damage) or one of two special abilities. Chosing one locks out the other. You also need to have the required amout of gold in order to advance. There are four stat improvements and four ability selections, so a Viking becomes maxed out at level 9. This was only slightly frustrating toward the end, when most of your Vikings will be maxed out but the zones continue to get harder. At that point it becomes a game of selecting the right Vikings to beat the level.

Along the way there will be tents where you can purchase items that will heal a viking, restore their energy or do any number of effects during combat. Of course these also cost gold, but having a shield at the right moment in combat can be worth it. In other places you will find tavern-ships where you can hire new Vikings to fill your roster. These hired hands cost gold and will start at level one, but have a special ability (like vampirism) that the storyline vikings you get for free don’t have. Hiring new vikings will allow you to mix and match to determine the optimal personnel roster for a certain zone.

Initially, you only have room for three Vikings on your ship. A fourth and fifth slot each become available as rewards for completing certain zones, as do abilities like reveal hidden paths that lead to previously unavailable zones. Sometimes these enhancements are available in the markets before you get to the zone that rewards them, but it will cost a lot more money than the other items.

Another aspect that makes each Viking even more unique are the hats. Sometimes you will be awarded a hat for completing a zone, and any Viking can wear it instead of the hat they came with. Each new hat enhances the Viking in some way, whether to allow them to earn XP faster or the party to collect more gold. Eventually, you get access to your ship’s hat shop, where you can create hats or combine them into more powerful hats. Each use does require some fuel, however, so you have limited opportunity to use this. Also, you get access to it pretty late in the game, so there isn’t a lot of play-time left to experiment with this too much.

The story is what makes Star Vikings entertaining. The conversations between the Vikings and O.D.I.N. are priceless, often ending in the computer sighing in resignation. When Captain Thork refers to a sacred idol as a table wedge he could use to steady his command console, you know you are in comedy.

The music is great – reminiscent of Led Zepplin’s “Immigrant Song,” which is more than appropriate in a game called Star Vikings. The Vikings seems to like it too – they are thrashing to it as you select which ones to go on the ship. The art is cartoony and fun, which totally works for this type of game.

Star Vikings is a fun game that anyone who remembers classic casual games, or anyone who likes to laugh, will enjoy. Mark Venturelli and the gang at Rogue Snail really did an impressive job putting it together. While you may not enjoy a great deal of replayability since the game is storyline-driven, at a price point of $10 you can’t go wrong. It handily earns a rating of 4 GiN Gems.