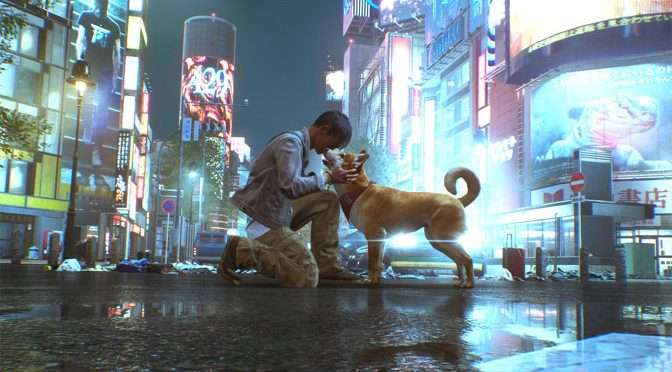 Hey all, I’m back with another game I got to play recently. It’s my Ghostwire: Tokyo review!

Plot and Characters: The plot and characters are sadly the weakest part of this game, which is a shame as it had a ton of potential. You can see this over the course of the game, but sadly they don’t ever go in depth into the background of prior events or the driving force of the characters we meet in the game – of which there are a surprisingly small amount. Although there is a nice starting point for the story line of the game in that Tokyo’s population has seemingly disappeared, the game’s plot overall is sadly pretty lackluster. 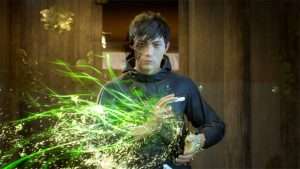 Honestly, though, the developers leave a lot of key plot details hanging. For example, we never learn why one of the two protagonists is called KK, nor his real name. Stuff like this occurs with pretty much every character, of which we only meet seven in total in actual gameplay. There are a couple others we never get to really interact with. Hell, one character is solely interacted with via voice recorders which looking back on seems like a way to save money from actually creating a model of the character beyond the profile picture we see in the game’s lore menu, let alone animating it. But like I said above about the plot, it never really gets delved into, and by the game’s end I was left wanting for a lot of things that probably never will get explained.

Gameplay: The gameplay is pretty good, although there are frustrating points in combat like where you can’t immediately prepare to attack after eating a health restoration item, and the fact that jumping interrupts your ability to charge attacks. 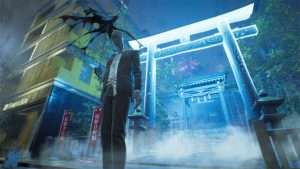 Nor is the ability to lock on to enemies in combat actually that particularly good. It’s okay, but it lacks the pull to stay on target which is annoying when enemies can and will move pretty darn fast or outright teleports. Still, the combat isn’t completely terrible, but it’s not exactly polished to a shine either which is a shame. 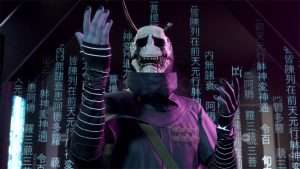 Movement isn’t great either. There’s a particular upgrade you will want to get as soon as possible for the Grapple Ability which is to summon a Tengu “Anywhere”. What that actually means is you can summon a Tengu by zooming in on the edges of most buildings, although more traditional houses are a hit and miss compared to the more rectangular buildings or railings. So, while you can move around like Spiderman at points, it’s the knockoff brand and it’s never very fluid like Spider-Man 2 or the much more recent Spiderman 2018. 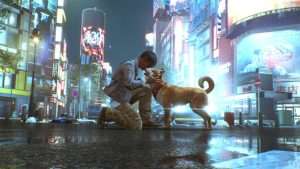 However, Ghostwire does make up a bunch of points in my eyes simply because you can interact with and pet the many dogs around Tokyo. All of the dogs are Shiba Inu which was a treat for me since the dog our family had was a Shiba before she died a few years back. So, seeing a bunch of them was a real pleasure for me. The rest of the gameplay is fairly solid, and the need to use the right stick to move hands in the proper motions to perform certain hand seals was a nice touch and actually pretty immersive. The adaptive feedback for my PlayStation 5 was solid and further helped immerse me in the game. 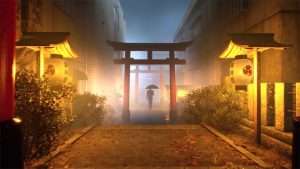 Art: The art is fairly solid, although there are points like where the Shiba Inu aren’t given incredibly detailed textures. It can look a bit off when you pet the dogs, but otherwise the artwork is pretty great – although you can tell they really saved on the budget by making all the various spirits hanging around Tokyo pretty much identical with just a few certain body types and no facial features at all. 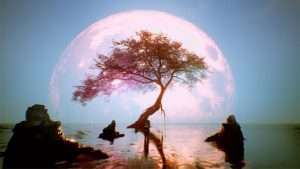 Music: The music is okay, but it wasn’t a standout to me like the Final Fantasy games’ musical tracks are. That said, it wasn’t ever grating, and the fact that I was never tempted to not listen because of the various audible clues to certain things going on in the world made up for it.

Overall: A solid, but not extraordinarily amazing game. But it’s a fun open world game with plenty of things to do if you don’t mind the story or characters being very lackluster. 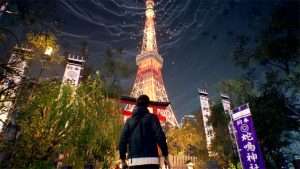 For those who like: Urban Fantasy, Japanese Mythology, Solid if sometimes unpolished combat. Brillant graphics that help to bring virtual Tokyo alive.

Not for those who don’t like: Any of the above, or a poor story and cast of characters, plus a plot that leaves quite a few details unresolved even if you fully complete the game and get a platinum trophy for doing everything it has to offer.