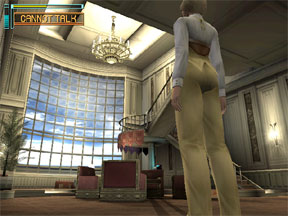 Lifeline is without a doubt the most revolutionary game I have ever experienced on the PlayStation 2.

The main feature of this adventure game is that you don’t actually control your main character in a traditional way. You actually talk her through the adventure.

When I first got the press kit for this game, I thought for sure they were talking about a PC title, since PCs have been experimenting with voice recognition for a long time and there are several productivity programs that work fairly well. But for this concept to work on the PS2 is something to behold.

All you need to get going is to plug in a USB microphone into one of the two ports in the front of the unit. There is a tutorial that gets you used to playing the game, but this is not really training the system to recognize your voice like what is needed for the PC. It is training the user how to speak and position the microphone.

The setting of the adventure game itself is very nice. In the not so distant future, Japan has built the first space hotel. It’s a massive place complete with five star guest quarters, suites, dining and observation rooms. It looks like a wonderful place if you have the cash to stay there. You and your girlfriend have won a contest, which is how you get your ticket. You and her get to spend Christmas in space, and attend the opening gala ball.

What starts out as the vacation of a lifetime turns deadly when the ball is interrupted by hundreds of monsters who burst into the room and start snacking on guests. Why they could not attack before all the boring speeches is beyond me. Anyway, anyone who survives the opening attack scatters in all directions.

You wake up in the operations room of the hotel, which is basically kind of like a hardened panic room. You are trapped inside, but no aliens can get to you. You have access to the thousands of hotel cameras, and can use the computer equipment inside the room to control the station by opening doors, powering elevators and generally working the electronics gear around the hotel.

However, you can’t directly manipulate the environment. For that, you quickly find and free a waitress named Rio who is trapped in a detention cell, having been thrown in there by a security guard trying to protect her. She becomes the way you explore the station and fix the various problems. As the name implies, you become her lifeline, helping her out of tough spots. Or perhaps she becomes your lifeline, since you will never get out of your little room without her. In any case, she will hardly do anything unless you tell her. You speak and she listens, mostly. You have several goals like finding your missing girlfriend and escaping your operations room, plus Rio has several objectives beyond just surviving as well.

The game can recognize over 20,000 phrases and words. But just like how the Wright Brothers first airplane was not suitable for commercial flights, this revolutionary title does not come without a fairly long laundry list of flaws.

The biggest mistake with Lifeline is not telling the players the possible keywords that the game knows. You have to guess what an object is called, and sometimes it’s darn near impossible. So you spend a lot of time guessing what something might be and having Rio say "I don’t know what you mean" when any reasonable person would know that the blue glowing square in the middle of the table is what you want her to look at. The player just has no idea that the object sitting there is a "newspaper" as I suppose they are supposed to look in the future. The very first room you start in has a few of these oddly named objects, like trying to get Rio to check the "dispenser" in a vending machine. Again, a list of objects the computer knows would have made the game a lot less frustrating, or at least narrowed the guess work down.

GiN Feature editor Greg Crowe would be highly annoyed if I did not mention his main pet peeve with the game too. On every PS2 game to date that I have played, the "X" key is to confirm a selection. With Lifeline, for some reason confirm is "Square." This lead Greg and some other testers to some odd mistakes when trying to save the game.

One of the most challenging aspects of Lifeline is that you even have to direct Rio in combat. Thankfully she has a pistol, and later a machinegun. But you have to tell her which enemies to target and what part of the bad guys to shoot. Some monsters might have armor on their heads, but have soft underbellies. So you need to say "head shoot" to force the creature to flip over, and then quickly follow with a "stomach shoot" at just the right time to put some lead into its gut. Part of the skill of combat is learning about the weak spots on the different creatures. Once you have the pattern down, it’s not too hard to make sure Rio survives.

The game has an ESRB rating of M for Mature, though I have no idea why it got stuck with such a label. You do find dead people throughout the station, get into combat and stuff, but nothing that should make the game anything more than a Teen rating. We are not talking about Silent Hill 3 here. If anything Lifeline is more like a traditional adventure game with a revolutionary interface.

The good thing about Lifeline is that there is an excellent plot that only slowly unfolds. Although you and Rio have a good working relationship, she keeps many secrets from you and only grudgingly lets you into her private world. Guessing at what is really going on will keep you trying to nudge Rio through just one more room before going to bed.

And once you learn how to talk to Rio – again, a lot of the problems could be fixed with either a keyword list or a better tutorial – you can manipulate her pretty well using your voice, even through some challenging action sequences, like trying to jump across steam vents and skitter safely over a high ceiling.

Rio seems almost human. I know this may sound odd, but I actually feel like I got to know her. The developers did a nice job at giving her emotions. She is afraid to go into some rooms, does not like the dark, and has an interesting personal life if you ask the right questions. Thankfully, you are slowly given a list of new questions you can ask her, so at least you don’t end up having to guess about that.

Lifeline is an interesting game with an amazingly cool interface. As an indication of things to come, it is an excellent choice. Thankfully, it is also a solid adventure game that lures you to keep playing even through all the minor annoyances. Just don’t forget to buy a USB microphone so you too can get to know Rio. When you see her, tell her I said hello.