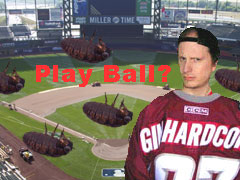 It took forever to get here, but finally I can enjoy the start of the 2004 baseball season. After all, I had to suffer with the turmoil of perhaps one of the worst hockey seasons I’ve ever seen (in fact, two thirds of the way in, I gave up on it), and I was anxiously waiting baseball to get here. Not only that, but it would be about time that the new baseball titles would come out, because with the exception of Unreal Tournament 2004 and Final Fantasy XI (yes, believe it or not, I am actually playing an FF title now), there was nothing new for me to play.

It would have also been time for me to provide my annual Baseball Report Card. For months I planned how it would turn out, but this season ended up with more disappointments than the Yankees buying every player and "Balco Boy" Barry Bonds’ refusal to use his likeness this year.

The biggest problem that I had involved the delay of ESPN MLB Baseball, Pushing the game back from mid-March until April 6th (Xbox version, 13th for the PS2) would not be beneficial to Sega’s franchise. That I will get to later, but with the delay I had to check out the other titles first.

One of my favorites of the past few years was the High Heat franchise, which I have played on my computer since the spring of 2000, and eventually on the PS2. However, the bankruptcy of 3DO and the following firesale to Microsoft delayed this year’s release of a possible High Heat 2005. Maybe it is not a bad idea as it will give the High Heat staff a chance to take advantage of the Xbox hardware and make us forget the dreadful MLB Inside Pitch ever existed.

Acclaim’s ASB series was never appreciated by me as a true baseball sim. I did try this season’s version out, and already I can say is that I’m not impressed. I would like to know what Acclaim is smoking with their fielder cam perspective, because it made me nauseous, not to mention that I always thought the control was sluggish. At least the visuals are good, especially with the authenticity of the player uniforms and stadiums.

The biggest surprise last year was EA Sports’ amazing new MVP series. Though it was a definite step up in the right direction last year, there were still some things I was concerned about, namely the defensive minded gameplay and the replica-style jerseys. The good news is this year EA improved the series by allowing manual fielding (nonexistent last year) and being the first baseball game to implement a true minor league system.

However the game still was a problem for me with the defensive minded gameplay being left unchanged. It is still hard as heck to hit the ball and score runs. Even with altering the AI sliders, it didn’t help at all. For it to be perfect baseball sim, all EA needs to do is make the batting more accessible. In addition, there should be easier access to juggling three rosters per team (one MLB, one minor AAA, one minor AA). But still, call it nitpicking, but EA still needs to get the Pirates jerseys accurate. The numbering they use is unique, but the ones that EA use make the jerseys look more like replicas. Call it being anal, but I want everything to be true to the real game.

But the biggest obstacle for my report this year was the previously mentioned delay of ESPN MLB Baseball. When the game was delayed last month, Sega’s response was "in an effort to release the best quality product possible," but when the Xbox version was released on the 6th, I picked up my copy, and was initially disappointed with what I laid my eyes upon.

What happened to what I considered the best baseball title released last year? The version I played had NO ambient crowd noise, NO PA announcer, NO stadium organ, and background music that became nonexistent after finishing a game. Not only that, but any time a hitter was able to beat the throw to first base, it was not counted as a base hit, but rather an error. But nothing compared to the fact that when I tried to throw to second to start a double play, it locked up the entire Xbox!

There have been reports by several websites that there are ESPN discs available in stores that had this problem, and I thought that there would be a patch to fix it just like what Ubisoft did to fix the Pandora Tomorrow multiplayer bug. Nonetheless, I took the game back to GameStop to pick up a replacement copy, and I’m happy to say the newer one is working much better, with full sound, no lockups, and gameplay the way I remember it last year. Best of all, I can hit again.

So unfortunately I will not be able to provide a full MLB report in time for the season, but at least I can say that this season is a slight disappointment between an impressive EA sophomore effort where I still can’t hit versus a late release for a game that may have some buggy copies on store stands. My advice is that if you want to pick up ESPN on the Xbox, you might want to check with the store to see if they accept returns for defective copies.