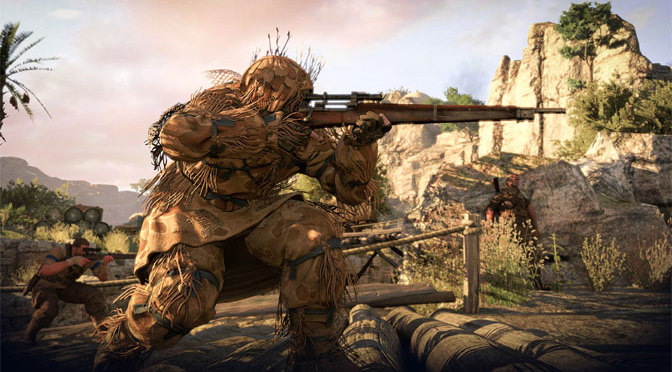 The prequel to Sniper Elite V2, Sniper Elite III, centers on OSS sniper Karl Fairburne, who is in the middle of the June 1942 Battle of Gazala, to assist British soldiers in stopping General Erwin Rommel’s forces. But Fairburne’s primary target is one General Franz Vahlen, who is working on a secret venture called Project Seuche.

Sniper Elite III is my first venture into 505’s WW2 stealth and tactical shooter series. I admit I never thought that I could really get into a game that is known for its sniper mechanics, and for my initial experiences, it was quite a joy to behold.

Maybe it was the experience of what happens at the end of that sniper rifle that brought all the enjoyment. We’ve seen bullet trajectory cameras go all the way back to the days of Max Payne, but not the extent of the damage on your victim. We see the entry point, the internal damage, and the exit wound in all its vicious glory. As a result you are rewarded based on what type of kill is performed, with the higher values going for head shots, lung shots, and yes, the satisfying testicle shot. Trajectory from the sniper rifle is fairly accurate, as you need to take into account elements such as wind direction, heart rate, timing your shot along with ambient noise to cover your position, and controlling your breath in order to make the shot perfect.

Sniper Elite III does a good job in showing if a shot will be deemed as a kill or not, as a red mark on your target will show where the impact will take place. But when it doesn’t you must resort to stealth mechanics to hide from your location. A white shadow will display where the enemy will locate you, meaning you must find another location to hide, using close quarter weapons such as pistols and machine guns, as well as land mines to set up traps.

Vehicles can also be sniped at in order to disable or destroy them, and can cause diversions to cover your position. It does add a nice sense of stealth to the gameplay.

Visually the game is impressive, and looks quite decent for a next generation title, running at a decent frame rate and resolution on the Xbox One. As for the sound, the voice acting is pretty average, nothing that can be considered memorable, but it gets the job done.
Sniper Elite III is a pretty enjoyable game to begin with, and the X-ray style kills are an absolute blast to witness. However, once you get past them, the game becomes an average stealth based shooter that could have ended up being so much more. As of now, the game stands as a decent rental, only worthy of purchase once the price goes down.

Pros: Watching all of the kills up close and personal is quite entertaining. Nice use of stealth mechanics

Cons: Gameplay is pretty basic when you get past the kills.