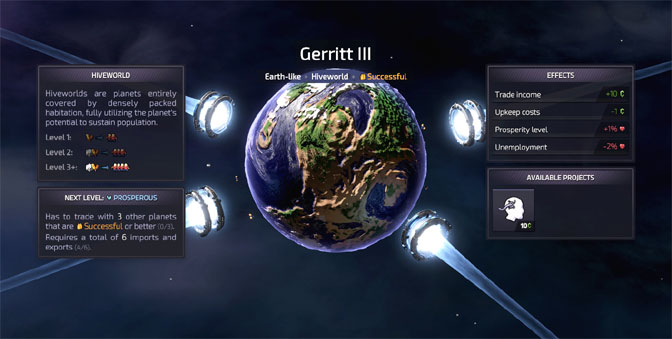 I am a big fan of strategy games, but most days I no longer have the time to sit down and build a huge empire in a game like Civilization VI. Yes, I know you can save your game and come back later, but those who play a lot of strategy titles know that you often “get into the zone” when playing, sort of naturally planning for a myriad of events that wont happen for 50 or 100 turns. If you leave and come back later, at least for me, it’s really hard to remember all of those little things I was previously planning. That is why I really like smaller strategy titles like Until The Last Plane, where missions can be accomplished in relatively smaller chunks of time. 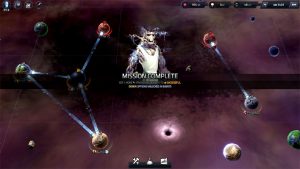 The problem with a game like Until The Last Plane, as much as I love it, is that the strategic elements are often stripped down, especially compared with classic 4X and other epic strategy games. And that is why I found Slipways to be so intriguing. It’s a strategy game that was recently released on the Steam platform that promises to provide a deep strategy experience in a game that most of the time can be played in under an hour.

After many hours of playing Slipways, I can say that for the most part developer Beetlewing wildly succeeded in that goal. 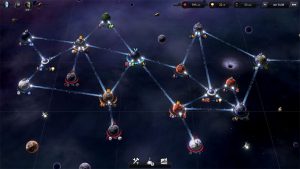 So how did Slipways accomplish the task of providing a deep strategy experience without getting players bogged down in endless micromanagement tasks? For starters, they eliminated one of the main things that drain so much of a player’s time: combat. By eliminating warfare from the game, it allows players concentrate on expansion and trade. So technically, this is a 3X strategy title instead of a 4X one. While it has elements of exploration, expansion and exploitation, there is no extermination. In fact, there is no competition at all, except against yourself for the best possible score and biggest, most successful space empire. Players who absolutely must fight to have a good time should look elsewhere. I like combat a lot myself too, but found that I didn’t miss it very much within the context of Slipways.

Almost anyone can jump into Slipways and start playing after watching very brief tutorial movies. They show all the basic game elements to get your galactic empire started. There are some advanced concepts like Council Missions that are not initially covered that pop up while you play, but these are mostly optional, and again the game does a good job of introducing them and explaining how they function the first time they are encountered. There are also five possible alien races to help run your empire, each with various perks you can research and earn. 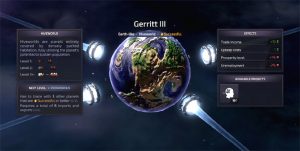 The core gameplay of Slipways involves creating trade paths between planets in your empire. You need to develop planets you discover in such a way so that you can import goods they need from nearby worlds, and then export whatever they make to other planets that need that resource. This earns both money and happiness to your empire and also your overall score.

So at its core, Slipways is all about supply and demand, although you are also creating the markets themselves to some extent, which makes it different than, say, a transport tycoon type of game. If there is a part of your empire that desperately needs food, you can often develop a nearby planet to grow it for export, assuming you can provide that world with what they need to harvest those crops, be it robots or workers or water. Developing planets is fairly open ended, though there are limits to what your technology can do, especially early in a game. And as your worlds develop and prosper, their needs also grow, as well as the resources they produce. 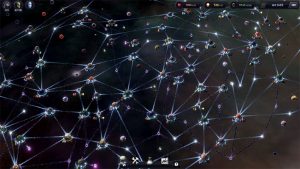 To share resources you construct slipways, which is why the game is called that. Slipways are like transport tubes that run between planets, and goods can go both ways. So if you have a mining planet exporting minerals to a foundry world that needs them, you can also automatically transport robot workers back to the mine via the same link.

There are however rules about how the trading works. For one, Slipways can’t cross each other. They also can’t pass through planets or other objects, which is one of the biggest challenges in the game. Say you have three planets in a line. The one in the middle can trade with those on both ends, but the two end planets are not able to swap resources. There are no “transport hubs,” so it’s not like Sid Meier’s Starships where building a relay adds all of that planet’s resources to your empire. All trades are local, and only the overall prosperity (and happiness) of your collective worlds contributes to your empire and overall score. That can make Slipways frustrating at times, especially when you “almost” have a perfect set of matches in one corner of your empire. 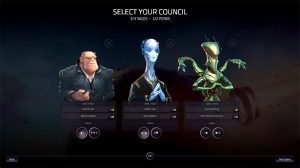 All Slipways games have a defined end point. You play the role of a galactic governor and your term is set at 25 years. The game is paused while nothing is happening, but advances anywhere from a month to a few months each time you take an action like launching a probe into unexplored space or building a slipway between planets to initiate trade. At the end of the game you are given a score based on how well you did. After you have completed a few games, Slipways opens up new challenges in the form of galaxies with special circumstances that make advancing your new empire a little more tricky. There is also a campaign mode where you go on missions and follow a somewhat interesting story.

I was impressed with the strategic elements in Slipways, especially given how the developers managed to create a game where it feels perfectly natural and satisfying to jump in and play for about an hour each time. Some games I played finished even more quickly than that, especially after I started to master the mechanics. 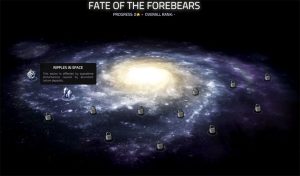 Slipways is definitely a game that is easy to play, but much more difficult to master. Thankfully, the short missions as well as the polish of the overall presentation makes becoming a skilled galactic empire builder a real joy, even played 40 to 60 minutes at a time.

Slipways easily earns 4.5 out of 5 GiN Gems. If you have got a free hour, Slipways might just give you an empire.