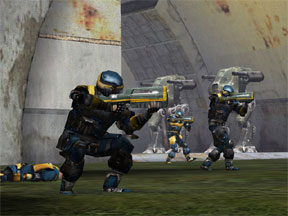 A wise old editor once told me that there were two great reasons for writing a review. The first was when you found a gem of a game that nobody much heard about and the second was when a well-hyped game with a lot of marketing muscle turned out to be really bad.

Chrome Specforce, thankfully, is an example of the former. Call it the greatest shooter you probably have never heard about if you like.

Although Chrome Specforce is being released in the US at a budget price of $30, many of its features could easily compete with the more traditional $50 shooters. In fact, if you are reading this review in Europe, then you probably have heard of the title, as research shows it is popular there.

Polish developer Techland put a lot of effort into Chrome and the details really show. If you are looking for a shooter that does not break your wallet, then Chrome is a good choice. Obviously it is not going to be quite as polished as something like Battlefront II, but for the price, Chrome is worth a purchase for shooter fans looking for something a bit different.

The game takes place in the far future, and you play a military operative of the government, sort of a policeman and soldier combined. Space travel is a reality and you will visit various locations in the known universe as you play.

Graphically, the game looks good, though most of the worlds seem to be designed in muted colors. It kind of reminded me of what the Farcry world might look like if it were ever hazy and overcast. You will notice that certain textures tend to get a little blocky close up, but if you are standing there looking at a blade of grass instead of scanning for bad guys, well, you may be playing the wrong game.

Overall though, the worlds look good. Chrome consists of massive outdoor environments and some finely detailed interior spaces. Outside, you sometimes feel like you can run forever. Inside, lots of nice details like lockers, soda machines, desks and chairs make the places you visit seem like real, living and breathing places.

But the real detail is in the character models, which includes vehicles. From little paint flecks on the rifles that make them look well-used to the tread on vehicle tires, models look great.

Also, there is a nice damage assignment engine. Early in the game I grabbed a sniper rifle from a dead enemy and was told to assault a bridge way off in the distance. Sniping the guards was pretty easy and they went down with head shots. Then a huge walker came up to help defend the bridge. I started shooting at the vehicle’s leg and after burning a clip or so, the leg broke and the behemoth toppled over. Pretty nice.

The real key to success in the game is the use of the special commando armor you are issued. Besides reducing the damage you take from bullets, it also has several special properties that can be tapped when needed. The special properties really help give you an edge in combat, but drain your suit’s battery. Thankfully, you can find a lot of batteries lying around, or off of dead troops that also have fancy armor, though not nearly as good as yours.

The special powers include heightening your reflexes to the point that the world seems to slow down. This bullet time has been with us since the days of Max Payne, but is always fun and really makes tough combats easier to master. Also, you can throw up a shield around your armor which makes you nearly invulnerable to attacks. Finally, you can activate a camouflage field that makes you incredibly stealthy, which is great if you are acting as a sniper or want to get through an area without engaging in a lot of combat.

Thankfully, there is an excellent tutorial that shows you exactly how and when to use your various powers. So many shooters ignore this and it’s nice to see that the developers don’t want their players feeling lost.

The audio for Chrome is good. Each gun sounds a bit different when fired and that helps make it fun to try different weapons. Popping off a ton of rounds with your pistol is a lot of fun, even if it does not do too much damage.

On the negative side, the main beef I have is the extremely long load time. It can take upwards to a minute or so to load a level, even on a really fast system. This can be somewhat excused because the levels, especially the outdoor ones, are so vast. Plus there are no load times once you start a mission. But still, waiting around watching the load screen is no fun.

Chrome Specforce is a fun shooter at a great price. Normally when we see shooters under $50, and especially at $30, we are thinking that the game is going to be low quality. Chrome breaks this mold by giving players a lot of extra features. If you take a game like Quake IV with tons of marketing hype and find a really lackluster, cookie-cutter game underneath, then look at the budget Chrome, you might be surprised at which one you like more. In any case, Chrome is worth the money and might make a great gift for shooter fans looking for a good value.