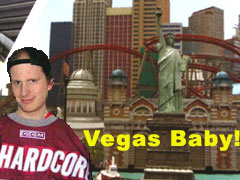 What Drives Through Vegas, Stays In Vegas

It seems now that the Xbox 360 launch hype is now over. In the three weeks that have passed since my successful attempt at purchasing a 360, I have dealt with complaints about system shortages, defective software, and most recently, save files that were being deleted (in Call of Duty 2.) Of course, none of those issues have affected me, and I only hope it stays that way.

Fortunately, I'm not the only GiN member to end up with an Xbox 360. After discussing my situation with her, our European colleague Chella also ended up with a 360 of her own. I can understand her concerns about the launch titles, especially when she read about the low rating some people have given Kameo.

To make it easier for her, I told her to not trust a single review in making her decision. Keep in mind the hate mail I got when I trashed NFL 2K5 (I think I was the only reviewer to give the game a negative score, which I stand by to this day), and of course, I'm sure Jeff Gerstmann from Gamespot gets tons of hate mail for all the 6.2 scores he tends to give. But still, one bad review does not a horrible game make.

Based on the Gamerankings scale, only Eurogamer gave Kameo a 50% score, while a majority of the gaming press gave it scores in the range of 80%. Even Greg Kasavin (another Gamespot correspondent who criticizes every title he reviews, DOOM 3 ring a bell) gave it an 8.7. IGN's score of 8.4 might have prevented it from obtaining an Editor's Choice award, but it still is a well commendable rating.

I will admit, that I haven't not fully played Kameo. I have only played a demo of the game that came with my latest Official Xbox Magazine (the first issue to include a demo disc that runs on both Xbox and Xbox 360). While the game in general might not be a title that I would put on my must-play list, it did give me an impression of what the X360 can do.

But while I am glad to see that Chella was able to get a 360 and is enjoying Kameo a lot, there is something I need to get off my chest right now. I'm sorry, Chella, but I stand by my claims that Project Gotham 3 is the best looking title on the 360. Granted Kameo does have a unique look and feel to it, and could be said to be worth the wait (considering this game was originally in development for the GameCube,) but still the game looks a little too cartoony for my taste.

I could say the same thing for Perfect Dark Zero, which in typical Rare fashion, looks more like a cartoon than a serious shooter. My decision to rate Project Gotham 3 as the best looking 360 title is a purely technical decision. Sure it can be put into the stereotype of "just another racer," but that will change once you see the game for real.

Screenshots do not do PGR3 justice, it is when the game is in motion that the 360 shows its true colors. Even further, the depth is enhanced when driving in the virtual cockpit mode. Face one of the side windows and dare not to be amazed at the depth of the city, not to mention witnessing the most realistic motion blur effect I have ever seen in a game.

And some of my other colleagues will agree with me about my "Vegas At Night" proclamation regarding that level. After witnessing my racing in the Vegas night first hand, they were all in agreement, PGR3 looks amazing (and keep in mind they were watching it on a standard definition TV. What would their reactions be if they saw it on my HDTV?)

Nonetheless, I commend Chella on getting her 360. I remember how I was a harsh critic of the original Xbox, until taking part in Halo LAN parties. After that, I was hooked, and the Xbox was the system of choice for me. (Until the 360 arrived, that is).

*Emergence Day 2006 is the launch date for Gears of War!