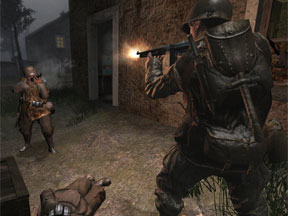 Call of Duty 2 is everything it should be. Yes, it’s a sequel and to some extent that means the developer knows what to deliver. But not all sequels deliver like this one. This is, simply put, a great game.

The original Call of Duty was no slouch either. It earned both the PC and Shooter Game of the Year in 2004. But the sequel lives up to the namesake and more.

The basic interface is the same as before. There are American, Russian and British campaigns that provide a series of levels that take place in real situations from World War II. Notably this time the British desert campaigns really bring the events of the real world home. Predictably, there’s a D-Day scenario (something absent from the original) and it’s not the one you (or I) expect. The twist on it caught me by surprise and left me gasping for air for a minute or two as I shifted historical events in my head. All praise for the developers for throwing a bit of a curve at me.

In the inevitable comparisons to the original Call of Duty it’s clear that the designers thought hard about what worked in the original and what could be enhanced. The new artificial intelligence of both your squad mates and the opposition seems far superior to the first game and it makes it both easier and harder to perform up to snuff. At some points the AI was so far ahead of me that they’d start shouting instructions at me as if I were some sort of idiot they’d been assigned to drag along. Sadly, the hints were desperately needed by my own foolish behavior. No real life warrior, me!

Some other control enhancements also bring up the realism a few notches. Grenades play a much more worrisome part in CoD2. I grew to hate them with a passion normally reserved for editors. But there’s also a danger indicator that indicates when one is near enough to cause you harm.

Another enhancement is the absolute lack of the artificiality of health packs and the like. Now it’s simply a matter of dying if you get injured too much too quickly. No need to horde health boosts for insane attempts at running through enemy lines and such. Now if you try that you simply die.

So it’s far better to think your way through traps and problems than just muscling through. Not that it’s not sometimes necessary. Urgh.

The last real change involves sniping. I loved using a scoped rifle in the original CoD. Now, though, it’s much harder to hold a target in the crosshairs at long distances as the game simulates the slight movements that humans are prone to make, especially in a stressful war situation. The only way to minimize those it to hold your breath and, while that does steady the shot, it can only be done for so long. Tricky, tricky.

Again, this is simply a great game. If you liked the first one"or if you liked ANY of the recent spate of WWII first person shooters"you should get this one. It’s worth it.

And when you finish the single player game, there is a huge number of people playing online. The online games are a lot of fun and are played out on interesting maps without any real hint of lag or performance problems that I experienced.

I admit to being biased. I’ve been waiting for this one for a while. And I told Breeden that I was in charge and I got to review this one. Sometimes it’s good to be the king, baby. CoD2 is definitely the king as well. They get a perfect score!