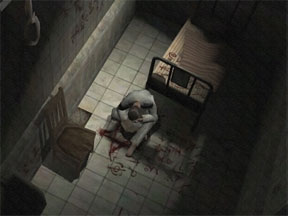 Call of Cthulhu: Dark
Corners of the Earth

Editors Note: We apologize for some seemingly random outbursts from our reviewer during this review. It seems playing Call of Cthulu: Dark Corners of the Earth has made him go a bit mad. You have been warned.

I write today of deeper things"

Old one Cthulhu is back!"

What better time of the year to bring about madness and chaos than the holidays, right? And my sanity, already pushed to the brink by endless rounds of ‘Rudolph’ and suchlike fare at the mall, has taken another hit with the excellent ‘Call of Cthulhu: Dark Corners of the Earth’.

An odd (HA!) combination of first-person shooter and mystery, Call of Cthulhu brings the creepiness and edginess of Lovecraft’s shared universe to much the same degree that scared the hell out of me when I was 13 and reading ‘The Dunwich Horror’ for the first time. The new game is a combination shooter and mystery that brings some action to the fore (depending on how you want to play the game) without, as many shooters do, abandoning the concept of plot and character. This isn’t your father’s Doom where it’s all ‘here’s a pistol. Go kill!’

Instead there’s real work to be done here for the player in terms of information and clue gathering, exploration, and assembling the pieces into a solvable whole that"well, I was going to write ‘makes sense’ but that’s not really the point in the Lovecraftian world"let’s say ‘is worth solving’. This isn’t surrealism I’m talking about here. This is madness. This is the sort of horror that leaves the characters gibbering and the players jumping out of their skin.

The game is set during the 1920’s, and was created in conjunction with Chaosium, the developers of the Call of Cthulhu pen and paper role-playing game.

Contoller-wise this game has the standard set up. One can look around, move, crouch, jump, take object, etc. Nothing all that out of the ordinary there. It’s useful and workmanlike. The player can pick up the controls and begin playing right away with little in the way or ramping up. It makes it easy for the player to become immersed in the game.

"You better watch out you better not cry

You better not pout I’m telling you why

Yog Soggoth is coming to town"

And immersion is what this game is all about. The designers clearly set their sites on having a game experience in which the player could easily and quickly become a part of the world. The graphics are excellent, though a little dark (I had to adjust the brightness on my television), and convey well the sense of creepiness that is required by a Lovecraftian game. Combine that with itch-making sounds and voices and the intentional lack of any heads up display and you’ve found a game that takes us one step closer to a truly engrossing encounter with another world. That alone is worth the price of admission.

That doesn’t mean it didn’t gross me out and set my teeth on edge. Bodies abound as well as pieces of bodies, blood, creepy glyphs and suchlike. And the creatures. Urgh, the creatures. Beings from beyond our understanding and that clearly have no interest in the players well-being and continued participation in this plane of existence are out there and can give you some bad turns even when you think you’re prepared for it.

And what game with the word ‘Cthulhu’ in the title would be complete without insanity? It’s pretty much a prerequisite and its absence would be much remarked upon. But it’s here with all that implies. The player can go several levels of insane as the exposure to the horrors that lie beneath reveal themselves. Simply put, the world is not what you believe it to be and the more you discover that the less what you’d thought of as reality has hold of you. The insanity manifests itself visually while you play, and I might add, in some frightening ways.

And don’t go too insane all at once. It’s a grim way to exit the game, that’s all I’m saying. Once is enough to make you careful to keep things in check.

Again, Call of Cthulhu: Dark Corners of the Earth is one hell of a game. And it’s scary enough that I’m not going to go break out my Lovecraft books again. Brrrr!